Duterte's Turn to China is a Rebalance, Not a Pivot 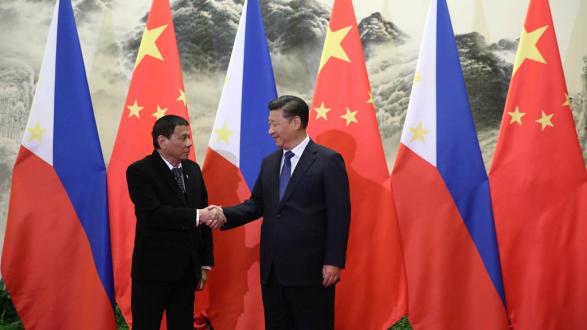 Goto is the senior Northeast Asia associate at the Woodrow Wilson Center's Asia Program. Ross is a professor of political science at Boston College and an associate at Harvard University’s John King Fairbank Center for Chinese Studies.

After assuming the presidency in June 2016, President Rodrigo Duterte of the Philippines has stirred significant controversy with his anti-U.S. rhetoric. Though a historically strong U.S. ally, Duterte declared his country’s "separation from the United States" and praised China during a recent visit there. He has called President Obama and other U.S. officials offensive names, cancelled joint U.S.-Philippine military exercises, and said he may annul a 2014 defense pact that allows U.S. soldiers to deploy to the Philippines.

"It’s important to remember that bilateral relations between the Philippines and the United States really do remain strong."

"President Duterte signaled that the Philippines has become too close to the United States and too distant from China," said Ross. "Duterte is seeking to rebalance the Philippines’ foreign policy between the two great powers. His diplomacy can be rather erratic and flamboyant, but the underlying trend is one of a greater balance. This poses a challenge for the United States."

Goto agreed that it’s not a "turn towards China."

Goto also pointed out that Duterte was democratically elected and leads the country with a majority of public support.

From China’s perspective, U.S. support for the Philippines has been an area of concern, according to Ross. China sees that support as challenging their sovereignty claim in the South China Sea. Starting in 2013, the United States supported the Philippines’ case against China in the Permanent Court of Arbitration, a case the Philippines won.

"America’s effort to use the [UN Convention on the] Law of the Sea as a way to both express its determination to challenge China’s rise and to establish support for its allies was for the most part unsuccessful," said Ross. "After Duterte took office, he signaled very clearly that he would not stand by the court’s decision against China, despite the victory for the Philippines, and that he was going to improve relations with China."

"The U.S. need to keep South China Sea islands out of the hands of China is minimal."

He added that China is simply too important for the Philippines to risk taking sides between China and the United States. Ross criticized Duterte’s predecessor, Benigno Aquino III, for putting the Philippines in a difficult position by challenging China.

"With China as a rising power, that’s not a place you want to be," he said. "Duterte has said to the Chinese, ‘I’m going to fix this. Yes, we won this case at the Permanent Court of Arbitration, but the legal decision in the ruling is irrelevant for how we negotiate with you. We’re going to negotiate these islands bilaterally.’ That’s what China had insisted all along, instead of internationalizing it by bringing in the United States or the court system."

Ross argued that since there’s no oil in the South China Sea, U.S. interests there are insignificant.

"The U.S. need to keep South China Sea islands out of the hands of China is minimal," he said.

Goto agreed that the United States doesn’t have a stake in the islands, but added that "the situation of island ownership has not been resolved."

"Is the golden age for ASEAN centrality over?" asked Goto. "President Obama ensured that the United States engaged directly with Southeast Asian nations. Will Trump want to continue that engagement in the region? One of the first ways he will be able to manifest his commitment to the region will be whether or not he shows up at the upcoming ASEAN summit in Manila. Part of the art of diplomacy is actually showing up. If he’s not there, that sends a strong signal about where U.S.-Philippine ties will be."