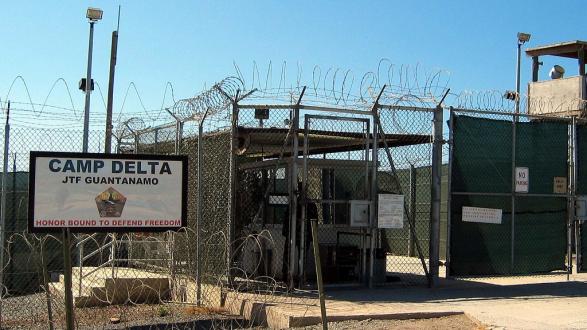 Through the Pacific Council’s Guantánamo Bay Observer Program, I recently spent a week in Guantánamo Bay observing pre-trial hearings in the 9/11 case at the military commissions. I happened to be observing the case during the 18th anniversary of the 9/11 attacks, a particularly poignant time to be there. Alongside observers from various organizations, a number of victims’ family members also sat in the gallery the week I was there, as did journalists, military commissions convening authority staff, and members of the military.

There are five defendants in the 9/11 case, with the most well-known being Khalid Sheikh Mohammed, the alleged planner of the attacks. His co-defendants are Walid bin Attash, Ramzi bin al-Shibh, Ammar al-Baluchi, and Mustafa al Hawsawi. All five defendants were in court for at least part of the first day of proceedings that I observed, while only two (Khalid Sheikh Mohammed and his nephew, Ammar al-Baluchi) were present for the second full day of proceedings that took place on September 11. Most of two other days of proceedings were closed to observers because they dealt with classified information.

The newly appointed judge in the 9/11 case—Air Force Judge Colonel W. Shane Cohen—recently set a tentative date for trial to start on January 11, 2021, and that has had the effect of highlighting the urgency of accomplishing certain legal and logistical goals so that the trial can start. One indication of this is that the week of proceedings I observed was just the first in a three-week stretch of proceedings, the longest continuous hearing block to date.

I happened to be observing the case during the 18th anniversary of the 9/11 attacks, a particularly poignant time to be there.

In addition, defense attorneys noted that the prosecution had been providing increased amounts of discovery, and in briefings with the observers, military commission officials noted that they were working on what would need to be done in order to accommodate the many people that would need to reside and work at Guantánamo for many months in order to complete a trial. Another logistical hurdle is figuring out how to move forward with proceedings in other cases while the 9/11 trial is underway, given that there is currently only one courtroom.

The two weeks of proceedings following the one I observed were going to involve witness testimony from a number of FBI agents and others. In the lead up to that, one of the issues I saw being debated in court was how best to create a trial record (for appeal purposes) that reflected the evidentiary impact that expected governmental invocations of national security during testimony would have. From the defense’s view, it is not sufficient to be told in advance what they may not ask witnesses, because it would be difficult to show in precise ways how the prohibition on asking certain questions affected their ability to present a defense.

Another significant issue which I saw argued was defense attempts to suppress evidence that FBI agents elicited from the defendants after they had been transferred out of CIA custody. The government’s position is that the answers the defendants gave to questions posed to them by the FBI are admissible in trial because the FBI agents and their questioning was separate from the questioning conducted by the CIA (which is not admissible due to the treatment of the defendants during that questioning, whether it be characterized as torture or “cruel, inhuman, or degrading treatment”).

One significant issue which I saw argued was defense attempts to suppress evidence that FBI agents elicited from the defendants after they had been transferred out of CIA custody.

Defense counsel arguments against the admissibility of the evidence elicited by the FBI included that both the CIA and FBI questioning was part of the same over-arching interrogation, the FBI was substantially involved in the CIA questioning, and the CIA treatment impacted the defendants’ responses to the FBI.

Other interesting matters that were covered in the proceedings that I was able to observe included submissions regarding whether the existence of “hostilities” during a given time was a jurisdictional issue for the judge to decide, a factual element of certain crimes for the panel (i.e. a jury of military members) to decide—or both. I also listened to submissions on whether the Convening Authority, Rear Admiral Christian Reismeier, USN (Ret.), was—or appeared to be—biased and should be prohibited from overseeing the 9/11 case.

While the Convening Authority position is not judicial, it does have the ability to grant certain post-conviction relief and do things like approve or deny additional resource requests. Reismeier had already voluntarily recused himself from two of the cases at the military commissions based on actions he had taken before assuming the position, including signing an amicus brief in the Al Bahlul case in support of the prosecution’s position, participating in a moot court argument for the prosecution in that case, and consulting with the prosecution on the issue of “hostilities.”

Despite setting a trial date [of January 11, 2021], Judge Cohen also made clear that the date is not set in stone and he will adjust as necessary as pre-trial proceedings continue.

The defense argues that many of the issues that Reismeier opined on in those cases are relevant to the 9/11 case, and that the evidence shows that Reismeier has connections to the prosecution. The government argues that the evidence does not meet the standard required for recusal. A final matter I observed was submissions on the government’s ability to present motions requesting to obscure the source of certain evidence ex parte, so-called “substituted evidentiary foundations.”

Despite setting a trial date, Judge Cohen also made clear that the date is not set in stone and he will adjust as necessary as pre-trial proceedings continue. On September 11, the prosecution opened their remarks by noting the significance of the day and informing the judge that victims’ family members would be periodically moving to an area outside the courtroom to pay tribute to the events of the day in 2001. Judge Cohen indicated that he appreciated the notification, but—true to his function as an impartial party— stated, “It would be inappropriate for me to take any further consideration.”

Andrew Boyle is a Pacific Council member and a member of the Council’s GTMO Observer Program. He serves as counsel in the Liberty and National Security Program of the Brennan Center for Justice at NYU School of Law.