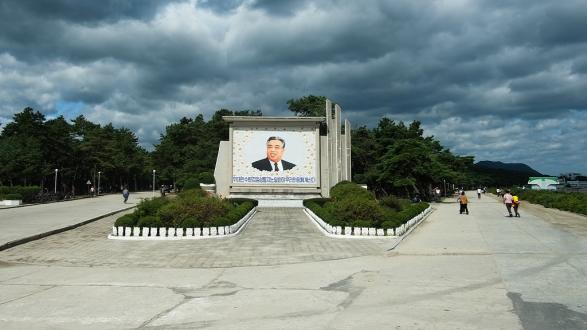 The United States cannot rely on China to intervene in North Korea’s nuclear program, Dr. David Kang and Dr. James Person told Pacific Council members during a discussion on security issues and tensions on the Korean Peninsula. The panel was moderated by Dr. Booseung Chang, Stanton nuclear fellow at the RAND Corporation, and introduced by the Honorable Jane Harman, director and president of the Wilson Center. The event was presented in partnership with the Wilson Center.

Kang is a professor of international relations and business at the University of Southern California. Person is the deputy director of the Wilson Center’s History and Public Policy Program.

"We keep saying we need China to step in, but China is doing what it does in its own national interest," said Kang. "We keep thinking if we pressure China enough, then they’ll pressure North Korea. China balances stability with denuclearization. China doesn’t want a crazy North Korea running around with nukes any more than we do, but I don’t think they’re going to put immense pressure on North Korea."

Person pointed out that during the Korean War, Kim Il-Sung and the North Korean government thought China was interfering in their affairs too much. During the Cultural Revolution, North Koreans also felt they were mistreated by China.

"There’s a limit to what China can do in changing North Korea’s behavior. It’s up to the United States."

"Today, by asking China to exert political influence over North Korea, we are essentially asking them to do precisely what North Korea has most resented over the past seven plus decades," said Person. "We are asking them to interfere in North Korean policies. I can’t emphasize enough just how deeply misguided this policy is. We need to find a better way."

Chang agreed, adding, "There’s a limit to what China can do in changing North Korea’s behavior. It’s up to the United States."

In early September, North Korea set off its fifth – and most powerful – nuclear bomb test, and South Korea says they’re ready to test a sixth at any time. Experts are now saying that North Korea could have enough uranium for 20 nuclear bombs by the end of the year and a self-sufficient nuclear program that is capable of producing around six nuclear bombs a year.

"I’m bored talking about North Korea because we’re having the same debate today that we were having 20 years ago when I started writing about North Korea," said Kang. "Identical debates: ‘Is he crazy?’ ‘Are they going to attack?’ ‘Should we hit him with a stick or give him a carrot?’"

"There needs to be an element of diplomatic engagement with North Korea, otherwise we’re not going to get anywhere."

"The proliferation of weapons systems is scary, but it doesn’t mean the minute they have the capability to attack the United States they’re going to do so," he said. "Kim Jong-un really values being the leader of North Korea. He knows starting a war means the end of his regime. The reason we’re deterred is we don’t want to risk 20 million lives in Seoul. We’re both deterred."

Some things, however, are changing in ways observers didn’t anticipate, Kang said.

"The government has lost a lot of control over its people than it used to have," he said. "There are three million cell phones in North Korea right now. It’s no longer just the ruling elites. It’s really beginning to trickle down."

Person argued for reengaging with North Korea diplomatically in order to arrive at a resolution in the region. In July, North Korea cut off its only official channel of diplomatic communications with the United States in retaliation for sanctions against Kim Jong-un over human rights abuses.

"There needs to be an element of diplomatic engagement with North Korea, otherwise we’re not going to get anywhere," said Person. "We need to rethink our policy of strategic patience. North Korea won’t come to the table if denuclearization is required."

"We’ve always prioritized nuclear weapons first. Maybe the way to solve the North Korea nuclear issue is by focusing on human rights and the economy first."

Kang said U.S. sanctions against North Korea do not work, but Washington continues to utilize them for domestic political purposes.

"It’s mostly political theater, because it hasn’t stopped North Korea," he said. "Capitalism is the American way. Why don’t we saturate them with capitalism?"

Kang also argued for a reversal of current U.S. policy as an attempt to solve the security situation on the Korean Peninsula from a different perspective.

"We’ve always prioritized nuclear weapons first, and a distant second has been the economy and human rights," he said. "We’ll talk about these things, but we don’t really care. We care about nuclear weapons. But we’re doing the same thing and we’ve made no progress. Maybe we should switch it around. Maybe the way to solve the North Korea nuclear issue is by focusing on human rights and the economy first."

The views and opinions expressed here are those of the panelists and do not necessarily reflect the official policy or position of the Pacific Council.