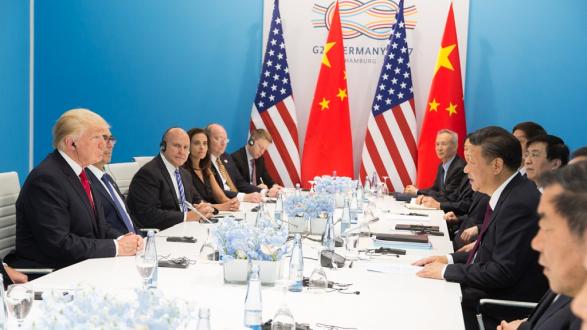 In a discussion with Pacific Council members, former U.S. Commerce Secretary Carlos Gutierrez urged the Trump administration to resolve the NAFTA negotiations soon in a mutually beneficial way and to focus on trade negotiations with China.

The discussion was moderated by Ms. Anne-Catherine Briand-Fortin, director of public affairs and government relations at the Quebec Government Office in Los Angeles. Gutierrez is also chair of the Albright Stonebridge Group.

In light of President Trump’s recent announcements of tariffs on imported steel and aluminum, and as his administration more broadly pursues economic protectionist policies, Gutierrez has remained a vociferous defender of free trade. He argued that U.S. actions such as pulling out of the Trans-Pacific Partnership (TPP) trade deal allows China to fill the void in the region.

"It seems to me that Trump’s decision—which was huge—to withdraw from TPP was made too easily," he said. "The good news is that Japan stepped up and said, ‘TPP is not gone.’ Ironically, Japan had to be convinced to join TPP, and now Japan is leading it. There’s a carve-out, if the United States eventually decides to come back in. The problem with being out of TPP is that unless U.S. companies have a plant in one of the TPP countries, they’re going to be shut out. We’re woefully underrepresented in the fastest growing, largest region in the world."

"What makes China believe that the United States will abide by a deal in 10 years? Look at what happened to Iran."

At the same time, Gutierrez pointed out that China is now taking the lead in trade efforts in the region with the Regional Comprehensive Economic Partnership (RCEP) by building roads through Asia, investing in the "One Belt, One Road" initiative, and getting ready for the regionalization of Asia over the next decade.

"There are two factions that we’re sending: one is the hardliners-on-trade faction (Lighthizer, Navarro, and Ross) and the other is the internationalist faction (Kudlow and Mnuchin)," said Gutierrez. "China is not easy to negotiate with. They just said they’re not excited about these meetings and their expectations are very low. How is the U.S. team going to go about this? Are they going to negotiate tariffs as punishment for intellectual property rights violations? Or are they going to try to get China to abandon their 2025 Plan and shut down state-owned enterprises? China has already said, ‘Don’t even try it. We’re not negotiating our model, we’re negotiating trade.’"

Gutierrez said a short-term deal over tariffs is not likely, and that "there’s a very high possibility of trade friction with China getting worse. What makes China believe that the United States will abide by a deal in 10 years? Look at what happened to Iran. I don’t think this distrust of the United States is irreversible, but it’s out there."

"We can't be fighting on all fronts. Let’s get NAFTA done and focus on the real goal, which is China."

On NAFTA, Gutierrez said he hopes and believes that a mutually beneficial deal can be worked out among the United States, Canada, and Mexico.

"There is optimism that we can come to an agreed upon solution in the NAFTA negotiations, which I think the Trump administration wants because we can’t be fighting on all fronts," he said. "Let’s get NAFTA done and focus on the real goal, which is China."

He also expressed concern that a trade war with China could be difficult to wind down and will result in reduced U.S. influence around the world.

"If you start this trade war, how do you end it? What will the world look like? My sense is that there will have to be a recognition that there are different systems, and that those other systems are as valid as any other," he said. "We’re going to have to learn how to coexist with state-owned enterprises. The idea of remaking the world in our image will be a lot tougher. We’ve been lecturing countries for decades about how to do things and what not to do and to stay away from protectionism. Some countries are saying, ‘Well, if the United States is pulling back, this is the time for us to push forward.’"