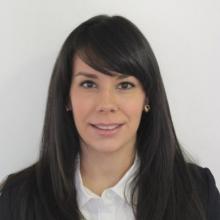 As the Director of Public Affairs and Government Relations for the Québec Government Office in Los Angeles, Anne-Catherine is responsible for developing the Québec Government's diplomacy and public advocacy programs in the Western United States, with the aim of advancing Québec’s interests and policies in the Western U.S. and contributing to a better understanding of Québec in the United States. Focus areas include the environment, energy, clean technology, innovation, and international trade policy.

Prior to her current role, Anne-Catherine had the opportunity to work in Constituent and Alumni Relations for the University of Washington in Seattle, as well as Northeastern University and Harvard Business School, in Boston. Earlier, while living in Montreal, she supported the expansion of Canadian small and medium-sized companies at the Business Development Bank of Canada.

She graduated from McGill University with a degree in finance and political science, and also obtained a certificate in journalism from the Université de Montréal.

Anne-Catherine volunteers with the Fulfillment Fund, an organization in Los Angeles that provides mentoring, one-on-one college counseling, and scholarships for students in underserved communities, in order to make their dreams of attending college a reality.