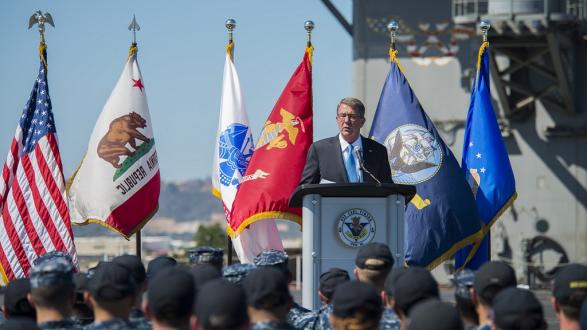 The United States will continue to "sharpen [its] military edge" in the Asia-Pacific in the face of regional threats, U.S. Defense Secretary Ashton B. Carter told U.S. Navy sailors, Pacific Council members, and others in a speech last week onboard the aircraft carrier USS Carl Vinson in San Diego.

"This region, with half of humanity, half of the world’s economy, is the single most consequential region for America’s future," said Carter, adding that the United States has committed to homeporting 60 percent of its naval and overseas air assets in the Asia-Pacific by 2020. "Indeed, the rebalance to the Asia-Pacific, which President Obama announced five years ago, is a critical national commitment. It includes diplomatic, economic, and military components all to ensure – at a time of dramatic political, economic, and security change in the region – that the Asia-Pacific remains a place where every nation can rise and prosper." 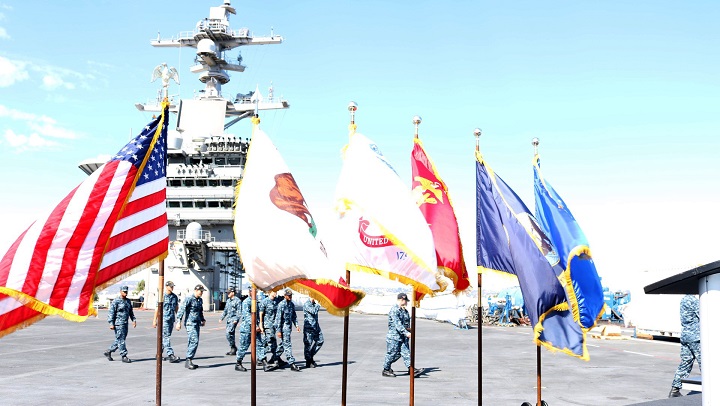 Carter emphasized the importance of U.S. alliances with countries such as Japan, Australia, New Zealand, Vietnam, South Korea, Singapore, Thailand, and the Philippines, to maintain peace and stability in the region. Despite recent hostile comments made by Philippine President Rodrigo Duterte, Carter called the relationship between the United States and the Philippines "ironclad."

The day before Carter’s speech, Duterte said the upcoming military games between the United States and the Philippines would be the last ever conducted. In September, Duterte also demanded that U.S. troops leave the southern Philippine island of Mindanao. In recent weeks Duterte has refereed to President Obama and other U.S. officials by offensive names.

"We're managing historic change in the Asia-Pacific, where China is rising, which is fine, but sometimes behaving aggressively, which is not."

"We’re managing historic change in the Asia-Pacific, where China is rising, which is fine, but sometimes behaving aggressively, which is not," he said. "Indeed, we’re also strengthening our deterrent and defense forces in the face of North Korea’s continued nuclear and missile provocations."

New satellite imagery of a North Korean shipyard shows what experts say could be construction of a nuclear submarine with the capability to launch long-range ballistic missiles. In September, North Korea successfully carried out its fifth and biggest nuclear test.

"North Korea, with its nuclear saber-rattling, continues to threaten our allies and heighten tensions in the region," said Carter. "Our alliance with the Republic of Korea continues to evolve, to assure deterrence on the Korean peninsula, including through the joint decision earlier this year to deploy the THAAD ballistic missile defense system to the Republic of Korea to help defend against North Korean threats there."

Carter said that the U.S. Department of Defense is taking steps to modernize its relationship with China by strengthening communications between the two militaries.

"We’ve recently concluded two confidence-building measures, one on maritime rules of behavior and another on crisis communications," he said. "We also regularly participate together in multilateral exercises, such as RIMPAC, that demonstrate the value of working together to address security issues. And our two militaries also hold regular dialogues and high-level consultations that seek to minimize misunderstanding."

Carter added that the United States still has serious concerns with China’s recent actions in the South China Sea and in cyberspace. Several nations claim territory in the South China Sea, where China has been building artificial islands and military outposts and conducting naval patrols. In July, an international tribunal in The Hague ruled against China’s territorial claims. Chinese officials said the decision was invalid.

"The Asia-Pacific remains a place where every nation can rise and prosper."

"Beijing sometimes appears to want to pick and choose which principles it wants to benefit from and which it prefers to try to undercut," said Carter. "For example, the universal right to freedom of navigation that allows China’s ships and aircraft to transit safely and peacefully is the same right that Beijing criticizes other countries for exercising in the region. But principles are not like that. They apply to everyone, and to every nation, equally."

Carter also used the opportunity to tout the benefits of the Trans-Pacific Partnership (TPP) trade deal.

"The rebalance [to the Asia-Pacific] is an investment in the region’s future – it will help the Asia-Pacific unlock its tremendous promise and to build a brighter future," he said. "And that’s good for the United States. For example, the United States wants to reinforce the open and inclusive economic approach that we all know can continue to benefit the region. That’s why one of the most important non-military initiatives of the rebalance is the TPP, which will bind the United States more closely together with 11 other economies, guarantee a high-quality, high-standard trade system, and support more U.S. exports and higher-paying American jobs. For those reasons, and its strategic value, TPP is an opportunity the region and the United States cannot afford to miss."

Following his speech, Secretary Carter flew to Hawaii to host a meeting on the USS Missouri with defense ministers of the Association of Southeast Asian Nations (ASEAN), including Philippine Defense Secretary Delfin Lorenzana.