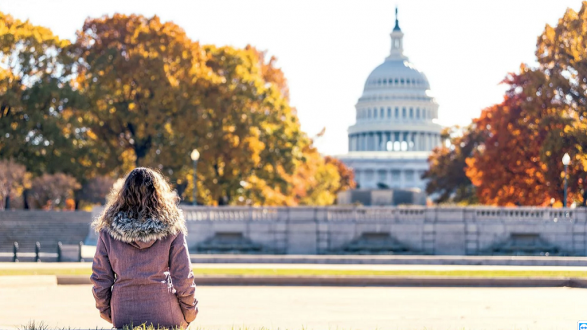 Fifteen presidential candidates have pledged to seek gender parity in their senior-level national security appointments on the campaign and in office, the newly formed Leadership Council for Women in National Security (LCWINS) said Tuesday. The Pacific Council recently partnered with this new organization as part of its commitment to inclusivity in the foreign affairs field.

In response to a call from dozens of national security leaders, the candidates pledged to ensure diverse hiring pools, set hiring standards that take diversity into account, and not discriminate against applicants who have taken employment breaks or downshifts due to family obligations.

LCWINS, a new organization of women and men from both parties dedicated to advancing women's leadership in foreign policy and national security, urges all 2020 presidential candidates, from both major parties, to join in making this commitment.

“The research is clear: diverse teams produce stronger, more durable outcomes, and the national security workforce has fallen behind the private sector in the race for talent,” said LCWINS co-founder and co-chair Ambassador Gina Abercrombie-Winstanley. “This commitment by so many of our nation’s most prominent political voices marks a much-needed shift in how we bring our nation’s best talent into national security policymaking. We applaud that commitment, and encourage all the remaining presidential candidates, from both parties, to take the pledge as well.”

“The #MeToo movement highlighted the degree to which women continue to face harassment, abuse and discrimination in the workplace,” said LCWINS co-founder and former Pentagon official Rosa Brooks, “Unfortunately, the national security workplace is no exception. While many talented young women continue to enter the field, many quickly hit a glass ceiling. At senior levels, progress toward gender balance in the field is stagnating, if not reversing. Women still make up only a minority of senior leaders in national security, but with this new initiative, we believe that’s finally going to change.”

“Our diplomacy should look like us,” said co-founder Ambassador Nina Hachigian, who serves on the Pacific Council’s Board of Directors.

At the senior level, America’s national security institutions remain male-dominated. The statistics for women of color are far worse.

Co-founder and former White House official Julianne Smith said, “In recent years, women have made many important strides in national security. But they continue to be underrepresented in Congress, on the Sunday talk shows, the boardroom, and the Situation Room. LCWINS aims to help women at various stages throughout their career tackle some of the unique challenges they face in the workplace.”

“Research at the National Democratic Institute shows that women in politics are more likely than men to work across party lines and to promote citizen confidence in democratic institutions—two outcomes that Americans say they want, and that American security policy sorely needs,” said co-founder and former State Department official Tamara Wittes.

At the senior level, America’s national security institutions remain male-dominated. Women occupy only about a quarter of civilian senior executive and supervisory positions at the Defense Department, and fewer than 10 percent of military general and flag officers are female. At the State Department, women make up 39 percent of senior executives, and in the intelligence community, only 30 percent of employees at senior pay levels are female. The statistics for women of color are far worse.

Presidential Candidates pledge that, if elected, they will seek gender parity in their national security appointments. In practice, that means candidates promise that:

a) Rigorous standards will be used to ensure diverse candidate pools for all senior positions;

b) No senior positions will be filled until a genuinely diverse candidate pool was considered;

c) Hiring recommendations will be evaluated based in part on whether they are contributing to diverse teams; and

d) Candidates will not be viewed less favorably due to breaks in employment or past part-time work due to family obligations.

Ambassador Gina Abercrombie-Winstanley: A group of senior women started talking about some of the hurdles to getting senior positions commensurate to our experience. That part of the discussion was brief because we quickly started exploring solutions. That was exciting!

What do you think is needed to achieve gender parity in national security and foreign policy workplaces?

There’s no one answer, but the most important foundation is to be intentional about solving it. First is to make clear the intent to be inclusive and to ensure accountability. It’s not rocket science.

What are the barriers that currently stand in the way of equality?

That people aren’t thinking about getting it done. If you do your recruiting the same way, you’ll get the same candidates. It’s easy to hire men because it’s expected. It “looks right” in that it’s familiar, and unfortunately not enough people will question the choice. The same old same old won’t serve the nation in the best possible way.

What do you see as indicators of real progress?

First, that we’re having this conversation. Second, that when this group first came together, we had a packed room full of accomplished, experienced, innovative women ready to serve in the national security field at the most demanding levels of government. Finally, that leaders ready to take on the most urgent challenges facing our nation as president quickly made clear they want to be part of the solution.

How can government agencies, think tanks, and other important actors in the national security and foreign policy spaces hold themselves accountable?

Look at the data. How does their organization’s make up—up and down the ranks—reflect the nation’s population? How does it reflect college graduates? How does it who’s active and working in the field? That will tell them immediately that they have work to do and few in this town [D.C.] have laurels to rest on regarding this issue.

What are your goals for LCWINS?

Make clear that the old standards will no longer do. It’s no longer good enough to say, “We’re not where we want to be, but we’ve made improvements.” Help open the doors so that women in the field who are ready to serve at the highest levels feel supported and get the chance to do so. Help make clear that this issue is addressed alongside of the array of inclusion issues across race, gender, disability, national origin, orientation, religion, and any others that prevent the very best from serving our nation to their full potential.

How do you see the organization growing in 2020 and beyond?

You have held senior positions in national security and foreign policy, including as the first woman to lead a diplomatic mission in Saudi Arabia. What advice do you have for women in entry and mid-level roles looking to advance in the field?

Know your value. Know what you bring to the table and speak up! I learned, not as early as I would have liked mind you, that the guys around the table knew no more than I and sometimes less. They were just willing to speak up.