Countering Extremism Through Voices of Defectors and Women 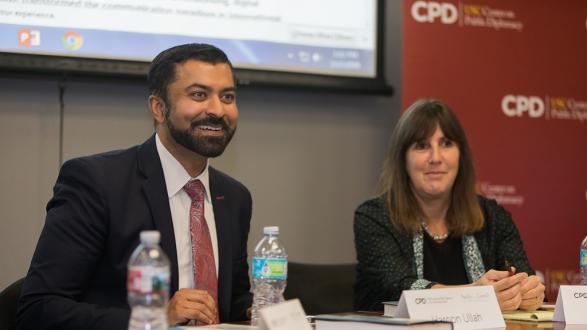 To counter extremist groups’ recruiting efforts, the United States must amplify the voices and stories of defectors and women, Mr. Haroon Ullah said during an event hosted by the Pacific Council and the USC Center on Public Diplomacy. Ullah is the chief strategy officer at the Broadcasting Board of Governors and the author of the book Digital World War: Islamists, Extremists, and the Fight for Cyber Supremacy. The discussion was moderated by Dr. Karen North, director of USC Annenberg’s Digital Social Media program.

"To take on terrorists’ online narratives, we have to include, curate, and amplify the voices of defectors and women," said Ullah. "How do we get those stories out there? Some of the most powerful stories are from defectors. If you look at gang culture in LA in the 90s, those who were former gang members had street cred. The messenger matters. The tragedy is that in most countries [joining a terrorist organization] is illegal, so there’s no way for them to be reintegrated. They have to be held accountable and they’re put in jail, so their stories are lost. We need to amplify and tell their stories. Their narratives can change people’s lives."

Ullah said that in addition to defector stories, voices of women—and mothers in particular—effectively counter extremists’ narratives. He added that terrorist groups like ISIL have become extremely sophisticated in terms of their online recruiting efforts.

"ISIL knows that audience matters," he said. "They have thought very carefully about and have a good sense of audience architecture and segmentation. Their mantra is, ‘The narrower the audience, the bigger the impact.’ They’ll say one thing in Arabic and then say something very different in English. Eighty percent of ISIL propaganda [in Arabic] is what we would call positive. A lot of it is about governance and giving candy to kids. Very different from what we see in English. We see the fear and horrifying beheadings and bloody narratives."

Another thing from Ullah’s research—which was largely based on interviews with defectors—that he noticed is their platform agility and their ability to "fail fast and scale up," as he put it.

"ISIL started using platforms in 2014 and have since moved way beyond Facebook and Twitter," he said. "They’re using apps like Riot, which allows encrypted communications, and Sarahah, which is now the top app in 25 countries and bigger than Snapchat, in their recruitment efforts. They know how to move from platform to platform depending on the audience they’re trying to reach."

He added that they are also starting to crowdsource their recruiting using their own version of a Kickstarter campaign.

"While we’re still talking about a platform they were using three years ago, they’ve moved on to different things. We now have to wrap our heads around ISIL 3.0."

Ullah worries that the West is behind the curve when it comes to countering extremist narratives.

"Governments, by nature, move slowly," he said. "While we’re still talking about a platform they were using three years ago, they’ve moved on to different things. We now have to wrap our heads around ISIL 3.0. There are new terrorist groups on the horizon that have the potential to become ‘cloud caliphates’—an entirely virtual online ecosystem using the dark web, cryptocurrencies, and encrypted apps. That’s something to think about as we try to get ahead of this. This is a content war, and this field is moving so fast."

Ullah also argued that there are a few misperceptions regarding who joins groups like ISIL and why.

"It’s a misnomer in popular thinking that poverty drives militancy," he said. "That if you don’t have a job, if you need subsistence, you’re going to join one of these terrorist groups. But actually, if you look at the majority of fighters that went, they come from the middle class. They’re driven by identity grievances, not by economic grievances."

"The way ISIL recruiting works is that it’s spread through close, intimate, one-on-one contact. It actually models closely to the way diseases spread."

Just like all politics is local, Ullah pointed out, all radicalization is local as well.

"There’s hotspot mapping and data that shows among the fighters in Tunisia, 80 percent of them came from one neighborhood in southern Tunisia, and in the Belgium attacks 75 percent of the fighters came from one neighborhood in Brussels," he said. "We almost need a public health approach. This counterinsurgency approach to fighting ISIL is not working. The way ISIL recruiting works is that it’s spread through close, intimate, one-on-one contact. It actually models closely to the way diseases spread."

Ullah pointed out that ISIL particularly knows how to reach a young audience. They plant a seed of doubt online through social media, encrypted apps, and the dark web, and eventually young people will find their message.