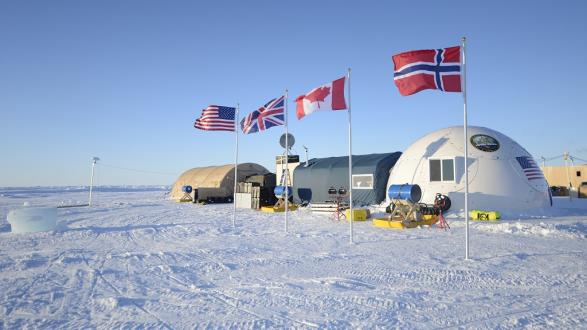 In 2007, the Russians helped to refocus global attention on the Arctic after planting a titanium Russian flag on the seabed of the Arctic Ocean at the North Pole. This event helped spark a new “Golden Age” of media and academic attention on the Arctic. Authors like Scott Borgerson penned articles with titles like Arctic Meltdown to describe the coming scramble for Arctic territory. The Arctic had not received this much attention since the “Golden Age” of exploration (perhaps poorly named given the large number of indigenous people who already lived in the area to be “discovered”).

In any case, the reality is that the Arctic is changing, and it is changing faster than anyone imagined, due to human caused climate change. This change is enabling access to a region that was previously inaccessible. This increased access also means increased risk. The rapidly changing environment is also a harbinger of things to come in the lower latitudes. Policymakers must pay attention to the Arctic today not only has an indication of the negative impacts of climate change but also as an increasingly strategic region for shipping, natural resources, and a place where people live.

The impact of climate change today is perhaps the most obvious in the high latitude regions. There is less of the thicker, multi-year ice which used to be referred to as “permanent pack ice.” According to the National Snow and Ice Data Center, the 12 lowest minimum sea ice extents in the Arctic Ocean have all been in the last 12 years. Sea ice is forming later and is melting earlier. There is general agreement that the Arctic Ocean will be ice free in the summer around 2040. Logically, if you combine the linear trend-lines for the annual freeze up and melt you come up with a prediction of when there will be no ice year round in at least part of the Arctic. Johnson and Eicken predict that the Beaufort and Chukchi seas will be ice-free year round by 2100.

At the local level, the impacts of climate change on communities is dramatic.

At the local level, the impacts of climate change on communities is dramatic. There is wave action eroding beaches where there used to be no waves because the water was covered by ice. Schishmaref, a village of about 600 people, recently voted to move to a new site at a cost of $180 million. Schismaref is hardly alone. According to the U.S. Government Accounting Office, 31 villages in Alaska are imminently threatened by climate change related flooding and coastal erosion. Decreased ice coverage also increases risk for subsistence hunters in the short term and brings questions regarding the long-term viability of communities who depend on the environment to survive.

There are also opportunities as an ocean appears where there was once ice. The long fabled Arctic sea routes are more and more a reality as Russia uses the Northern Sea Route to ship liquefied natural gas and the first Maersk container vessel just completed a transit this year. The region has also seen an increase of eco-tourists seeking adventure and has even seen large ships like the Crystal Serenity complete the Northwest Passage over North America in 2016 and 2017. The bottom line is that there is massive potential economic opportunities in the Arctic to include “an estimated 13 percent of the world’s undiscovered oil, 30 percent of the undiscovered gas, and some one trillion dollars’ worth of minerals,” according to the U.S. Coast Guard.

These opportunities to tap the economic potential of a newly accessible region are leading to increased international interest in the Arctic. This has led to the idea of a race for the Arctic. The reality is much more nuanced, with the five Arctic states that border the Arctic Ocean (the United States, Canada, Denmark [Greenland], Norway, and Russia) issuing the Ilulissat Declaration in 2008 in which they agreed that the current body of international law was sufficient to govern the Arctic Ocean. In addition, the eight states with Arctic territory (the Arctic five list above with Sweden, Finland, and Iceland) have worked to cooperate forming both the Arctic Council and the Arctic Coast Guard Forum.

There have been some concerns about Russia’s military buildup in the Arctic. At the same time, it is important to remember that Russia owns 53 percent of the Arctic coastline and has been a generally good partner in the Arctic.

There have been some concerns about Russia’s actions in the Arctic to include its military buildup. The concerns are legitimate given Russia’s actions in Georgia and Ukraine which are clear violations of international law. At the same time, it is important to remember that Russia owns 53 percent of the Arctic coastline and has been a generally good partner in the Arctic. Russia and Norway also peacefully settled their 1,750 kilometer Arctic maritime boundary in 2010.

The changing Arctic is an opportunity for policy makers to get it right. There is a real opportunity to develop a newly accessible region in a sustainable way, in consultation with and consideration for the people that live there, but the clock is ticking. The United States is an Arctic nation and it is critical that we acknowledge our responsibilities to our Arctic citizens.

Success in the Arctic needs to be a whole of government effort—to include the mitigation of climate change. The Arctic is not like Vegas—what happens in the Arctic will no longer stay in the Arctic. The reality is that we are all interconnected and the very real concerns faced by our Arctic citizens will impact the rest of the United States.

Jeremy McKenzie is a Pacific Council member, a lieutenant commander in the U.S. Coast Guard, and a researcher for the Center for Arctic Study and Policy.

The views and opinions expressed here are those of the author and do not necessarily reflect the official policy or position of the Pacific Council, the U.S. Coast Guard Academy’s Center for Arctic Study and Policy, the U.S. Coast Guard, the Department of Homeland Security, or the United States government.