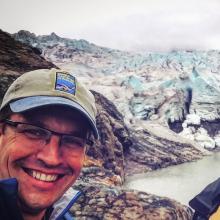 Lieutenant Commander Jeremy McKenzie is a member of the faculty at the U.S. Coast Guard Academy where he also serves as a researcher for the Center for Arctic Study and Policy. While working on his Master of Public Policy degree at Brown University, McKenzie led a project on cooperation in the Bering Strait Region. He has continued to work on this research since his assignment at the Academy, which he has presented at the Arctic Coast Guard Forum, the United Nations House in Moscow, Russia and to the Russian Ministry of Foreign Affairs. In addition, McKenzie has conducted research to support the U.S. Coast Guard’s icebreaker acquisition project. He recently advised both a team of seniors at the USCGA researching the Arctic, as well as a team of Brown graduate students engaged in the study of Chinese activities in the Arctic. This summer he will be researching in Scandinavia on Norwegian and Russian cooperation in the Barents Sea.

Previously, McKenzie served as a Aviator at air stations Atlantic City and Savannah as an Aircraft Commander qualified in both Search and Rescue and Rotary Wing Air Intercept missions. Prior to serving in the Coast Guard he was an Army Officer and UH-60 Blackhawk medical evacuation pilot. In the Army, he served multiple overseas tours to include Korea, a peacekeeping tour in Bosnia and two combat tours in Iraq. As military aviator, Lieutenant Commander McKenzie has accumulated more than 2,900 flight hours, including more than 300 hours of combat and imminent danger time.

McKenzie is active in his local community serving as a youth soccer coach. He also volunteers his time to serve both as a Board Member on Brown University's Alumni Association Board of Governors and as the Vice President of the Faculty Senate at the Coast Guard Academy.

A more detailed biography may be viewed here: https://www.uscga.edu/jmckenzie-bio/

A Case for a Stronger Partnership with Russia in the Arctic
Instead of Buying Greenland, Enhance Security & Cooperation
America is an Arctic Nation—It’s Time We Acted Like It