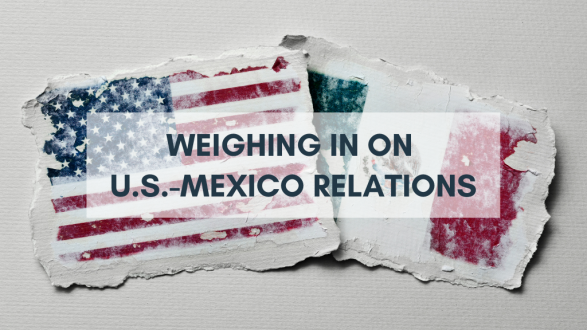 Please let us know what you think about international vaccine sharing by taking this brief survey.

Your input helps to influence and strengthen our work on U.S.-Mexico relations. Thank you for your participation!

The Pacific Council has launched its First 100 Days Memo on U.S.-Mexico Policy to be distributed to the incoming Biden administration. The memo outlines policy recommendations on trade, immigration, and diplomacy, as well as how President Joe Biden can strengthen the bilateral relationship from the outset of the next term. Sign up to receive our monthly Mexico Initiative Newsletters to receive updates on this project by filling out this form.

Michael Camuñez Weighs in on the Vaccine Surplus

Pacific Council Director and Mexico Initiative Chair Michael Camuñez penned an op-ed for CNN laying out the case that the United States' vaccine surplus should go first to Mexico.

"The coronavirus didn’t stop at international boundaries—and neither should the vaccine," he writes.

As the Biden administration rounds out its first 100 days in office, the Pacific Council is pleased to recognize the progress that has been made in U.S.-Mexico relations since January 20:

These gestures sync with the Council's recommendations to President Biden in our First 100 Days Memo on U.S.-Mexico Policy, which has so far been shared with key leaders in the executive branch, State Department, Department of Homeland Security, National Security Council, and Customs and Border Control.

By producing viable, nonpartisan policy solutions and providing suggestions on meaningful U.S.-Mexico engagement, we are directly carrying out our mission by:

Throughout this activity, we will engage ideas, projects, people, and organizations that support our experts’ recommendations with the goal of building awareness and improving the U.S.-Mexico relationship.

The Council is also releasing a series of articles about these various policy areas in conjunction with the memo:

Read about U.S.-Mexico Trade Policy: Recovering from COVID and Beyond.

Read about the United States and Mexico: Immigration Policy in 2021.

Read about Public Diplomacy Efforts Between California and Mexico.

All events about Mexico are open to the public. Members of the public may register here.

Learn more about the growing migration surge at the U.S.-Mexico border from Essey Workie of the Migration Policy Institute. Register here.

Monday, March 15 / ROBERT ZOELLICK ON U.S.-MEXICO TRADE, DIPLOMACY, AND BEYOND

This policy briefing is the first virtual event of a series of three where experts will share recommendations from the Pacific Council's First 100 Days Memo on U.S.-Mexico Policy as if they are presenting to the Biden administration.

Thursday, February 25 / COVID-19 AND IMMIGRATION AT THE U.S.-MEXICO BORDER

The Pacific Council will host a discussion on solutions to public health challenges faced by migrant communities amidst the pandemic. This event is presented in partnership with International Medical Corps.

How Attorneys Can Respond to the Migration Surge

During last Friday’s event on the emerging crisis at the border, Essey Workie of the Migration Policy Institute emphasized the tremendous need for low-cost or pro bono legal services at the border, particularly on the Mexican side. Previously, people did not need attorneys in Mexico for their U.S. asylum cases, whereas now children with family and adults who cannot enter the United States need legal services while they wait in Mexico. Children or adults who have legal representation are significantly more likely to experience immigration relief as a result of court proceedings.

Here are two resources for attorneys who would like to donate their time toward this issue:

Call to Action for Concerned Citizens

Essey Workie provided a few actions concerned citizens can take in response to the influx of migrants at the border:

Check out these articles and insights that dive deep on issues important to U.S-Mexico relations from trusted experts:

The Council’s existing Mexico Initiative aims to promote stronger ties between Mexico and the United States; build awareness among Angelenos of the importance of the U.S.-Mexico relationship; and give influential voices in politics, the press, and the business community a more nuanced understanding of Mexico.

The Council’s previous work on U.S.-Mexico policy and our built-in experience with key regional issues, as well as our geographical location near the U.S.-Mexico border, give us a unique position to make the best possible recommendations on how to move this relationship forward. In addition to an advisory board dedicated solely to U.S.-Mexico relations and serving as a regional secretariat for the Mexico-Los Angeles Commission, we have sent three delegations to Mexico City and one delegation to El Paso, Texas, and Juárez, Mexico, to explore the implementation of immigration policy at the U.S.-Mexico border.

We’ve explored topics ranging from the AMLO administration, immigration, border issues, trade, and the economy. Our direct research through delegations and meetings coupled with member expertise served as the bedrock and lens through which our First 100 Days Memo was constructed.

The First 100 Days Memo on U.S.-Mexico Policy was informed by a group of experts and interested citizens whose experience with Mexico spanned decades, presidential administrations, and fields of work and study. The following individuals participated in group meetings in October and November 2020 to inform the final memo outcome:

To learn more about this project, contact Ashley McKenzie at amckenzie@pacificcouncil.org. To write an article about Mexico or U.S.-Mexico relations, trade, immigration, public diplomacy, or other relevant topics for our online Magazine, contact Justin Chapman at jchapman@pacificcouncil.org.