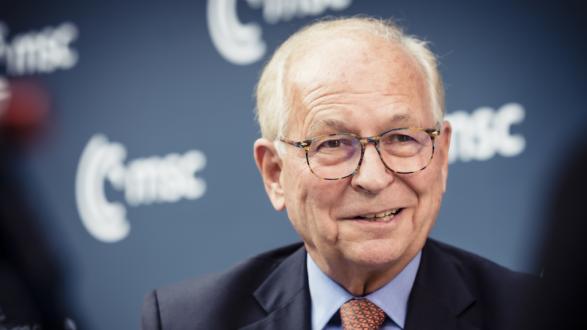 A conversation with German Ambassador Wolfgang Ischinger on his new book World in Danger, offering a vision of a European future of peace and stability. If you are a Council member who would like to watch this event, please let us know at engage@pacificcouncil.org.

Ambassador Ischinger has been chairman of the Munich Security Conference since 2008. He has a long diplomatic career including his role as State Secretary in the German Ministry of Foreign Affairs and posts as German ambassador in Washington, D.C., and London. Read more.

Kimberly Marteau Emerson is a lawyer, civic leader, and human rights advocate. From 2013-2017, she lived in Berlin with her husband, former U.S. Ambassador to Germany John Emerson, where she worked both with the U.S. Embassy as well as independently to drive projects on multiple platforms, including the promotion of German immigration and integration efforts related to the 2015/2016 refugee crisis, and addressing the issue throughout Germany of bringing women to the economic and political decision-making table. Read more.

The world appears to be at another major turning point. Tensions between the United States and China threaten a resumption of great power conflict. Global institutions are being tested as never before, and hard-edged nationalism has resurfaced as a major force in both democracies and authoritarian states. From the European perspective, the United States appears to be abdicating its global leadership role. Meanwhile, Moscow and Beijing eagerly exploit every opportunity to pit European partners against one another.

But a pivot point also offers the continent an opportunity to grow stronger. In World in Danger, Wolfgang Ischinger, Germany’s most prominent diplomat, offers a vision of a European future of peace and stability. Ischinger examines the root causes of the current conflicts and suggests how Europe can successfully address the most urgent challenges facing the continent. The European Union, he suggests, is poised to become a more powerful actor on the world stage, able to shape global politics while defending the interests of its 500 million citizens. This important book offers a practical vision of a Europe fully capable of navigating these turbulent times.

COVID-19 AND IMMIGRATION AT THE U.S.-MEXICO BORDER
HOW SHOULD PRESIDENT-ELECT BIDEN RESPOND TO A RISING CHINA?
THE UNITED STATES AND THE FUTURE OF 5G WITH FCC CHAIR AJIT PAI