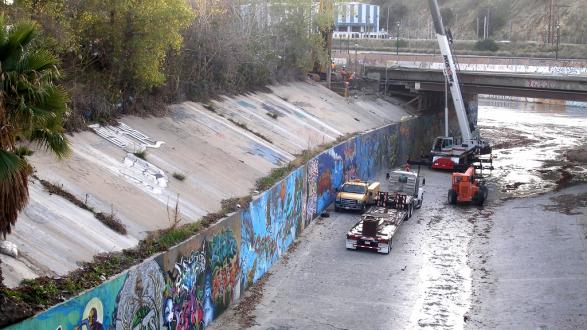 Read a summary of this event here, and check out photos from the event on our Flickr page.

A discussion with California Assembly Speaker Anthony Rendon and water experts on how cities abroad are bringing stakeholders together to remake their own rivers and urban landscapes.

In line with similar efforts around the world, there is a renewed focus in Los Angeles on urban growth, sustainability, and livability. The region is working to create more open spaces for ever denser urban cores, including a major effort to revitalize the Los Angeles River.

Speaker Rendon, who is leading this effort, will be joined by global policy leaders and experts for a one-hour discussion on river projects. What lessons on river revitalization can we draw from cities abroad? What were the results of those cities' efforts to bring stakeholders together to remake their own rivers and urban landscapes?

This event, in partnership with the California State Assembly, is part of a broader celebration with art shows and cultural performances taking place throughout the evening of July 21, to encourage our communities to reimagine the LA River.

Anthony Rendon represents the 63rd Assembly District in the California State Assembly. He was sworn in as the 70th Speaker of the California Assembly in March 2016. Read more.

Josan Meijers has been a member of the board of the Provincial Executive for the Dutch Province of Gelderland since 2012. As such, her core tasks are spatial planning, water management, housing, aviation, and cultural infrastructure and preservation. Read more.

Madelyn Glickfeld is currently a member of the Los Angeles Regional Water Quality Control Board, appointed by both Governor Schwarzenegger and Brown. She is also a member of the Trust for Public Land California Advisory Board and assistant director of the UCLA Institute for the Environment and Sustainability. Read more.

The Honorable Taehoon Ku, Consul, Consulate General of the Republic of Korea in Los Angeles

Taehoon Ku previously served as director of the Overseas Korean Nationals Protection and Crisis Management Division at the Korean Ministry of Foreign Affairs.

Jose Fierro joined Cerritos College as the president/superintendent in 2015. Prior to that, he served as the vice president of academic affairs and chief academic officer at Laramie County Community College in Cheyenne, Wyoming. Read more.

HOW SHOULD PRESIDENT-ELECT BIDEN RESPOND TO A RISING CHINA?
GOALMAKERS NATIONAL FORUM
POLICYWEST 2020: A CONVERSATION WITH JOHN PODESTA ON CLIMATE & NATIONAL SECURITY