EDGERTON SERIES ON RESPONDING TO A RISING CHINA: HUMAN RIGHTS IN CHINA 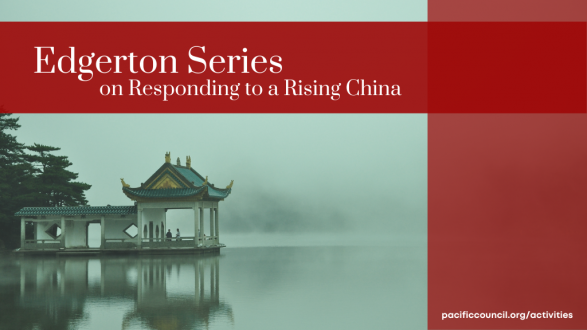 An installment of the Edgerton Series on Responding to a Rising China, on the state of human rights in China. Open to the public.

*Members of the public may register here. Pacific Council members may register by clicking the Register button below.*

Kenneth Roth is the executive director of Human Rights Watch, one of the world's leading international human rights organizations, which operates in more than 90 countries. He has written extensively on a wide range of human rights abuses, devoting special attention to issues of international justice, counterterrorism, the foreign policies of the major powers, and the work of the United Nations. Read more.

Kimberly Marteau Emerson is a lawyer, civic leader, and human rights advocate. She worked in the Clinton administration as a senior political appointee and spokesperson for the U.S. Information Agency, now part of the State Department. She serves on the Board of Directors of Human Rights Watch, the Advisory Board of the USC Center on Public Diplomacy, and is a member of the Council on Foreign Relations and the Pacific Council on International Policy. Read more.

According to the Human Rights Watch World Report 2021, "the Chinese government’s authoritarianism was on full display in 2020 as it grappled with the deadly coronavirus outbreak first reported in Wuhan province. Authorities initially covered up news about the virus, then adopted harsh quarantine measures in Wuhan and other parts of China. The government has rejected international calls for independent, unfettered investigations into Chinese authorities’ handling of the outbreak, and surveilled and harassed families of those who died of the virus.

"Beijing’s repression—insisting on political loyalty to the Chinese Communist Party—deepened across the country. In Hong Kong, following six months of large-scale protests in 2019, the Chinese government imposed a draconian “National Security Law” on June 30—its most aggressive assault on Hong Kong people’s freedoms since the transfer of sovereignty in 1997. In Xinjiang, Turkic Muslims continue to be arbitrarily detained on the basis of their identity, while others are subjected to forced labor, mass surveillance, and political indoctrination. In Inner Mongolia, protests broke out in September when education authorities decided to replace Mongolian with Mandarin Chinese in a number of classes in the region’s schools.

"Chinese authorities’ silencing of human rights defenders, journalists, and activists, and restrictions on the internet, also make it difficult to obtain accurate information about Chinese government policies and actions." Kenneth Roth, executive director of Human Rights Watch, will speak on these issues and more during the next installment of the Edgerton Series on Responding to a Rising China.

The Edgerton Series on Responding to a Rising China aims to provide proactive and forward-looking solutions to some of the most complex local, regional, and global issues facing the United States and China today, through regular engagement in debates and discussions with the foremost experts in Chinese affairs. The Edgerton Series is made possible by generous support from the Edgerton Foundation. We thank Dr. Bradford and Ms. Louise Edgerton for their continued support and dedication to the Pacific Council.

SUMMIT OF THE AMERICAS SERIES: A CONVERSATION WITH TAMARA TARACIUK BRONER