A CONVERSATION ON THE 'QUAD' 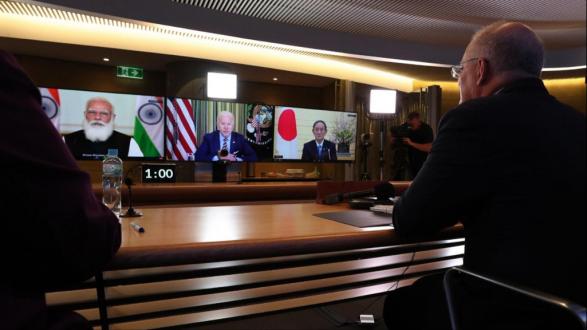 Join us for a special dialogue featuring members from Quad governments to share perspectives on their commitment to cooperation. The “Quad” is composed of Japan, Australia, India, and the United States.

*This event is open to the public. Members of the public may register here. Pacific Council members may register by clicking the Register button below.*

Ms. Duke was appointed Australian Consul-General Los Angeles in August 2020. Ms. Duke is an experienced senior career officer with the Department of Foreign Affairs and Trade (DFAT). She was most recently Australia’s Ambassador to the Association of Southeast Asian Nations (ASEAN). Read more.

Akira Muto's past overseas postings include Russia twice, and in the United States, to Washington, D.C., and Boston. Akira was a visiting scholar at Stanford University's Walter H. Shorenstein Asia-Pacific Research Center at the Freeman Spogli Institute for International Studies. Read more.

Within the context of geopolitics, the “Quad” is composed of Japan, Australia, India, and the United States. In March 2021, leaders from all four countries met in a virtual summit to discuss priorities, including cooperation around vaccine distribution, combating climate change, and critical and emerging technology.

Quad countries bring diverse perspectives and are united in a shared vision for a region that is free, open, inclusive, healthy, anchored by democratic values, and unconstrained by coercion.

The Pacific Council on International Policy will host a special discussion featuring members from Quad governments to share perspectives on their commitment to quadrilateral cooperation in conversation with one another.