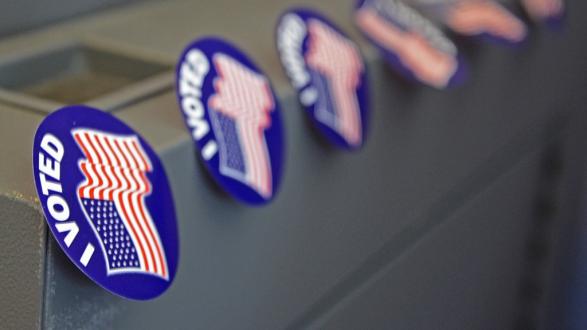 A Local-to-Global webcast on lessons and threats from other countries regarding U.S. election security. Open to the public.

Camille François works on cyber conflict and digital rights online. She is the Chief Innovation Officer at Graphika, where she leads the company’s work to detect and mitigate disinformation, media manipulation and harassment. Camille was previously the Principal Researcher at Jigsaw, an innovation unit at Google that builds technology to address global security challenges and protect vulnerable users. Read more.

Thomas Zimmerman oversees programing for Council members and the general public. After working on Barack Obama’s 2008 presidential campaign, Thomas joined the Pakistan Desk at the Department of Defense before moving to the White House to serve as Special Assistant to the National Security Advisor. In 2012, he managed the national security and foreign policy research portfolio for President Obama’s reelection campaign. Read more.

As U.S. states brace for the upcoming November election, the threat of a pandemic, voter suppression, and foreign interference looms large. These challenges are not unique to the United States, but the country already struggles amongst its peers in voter turnout and ease of voting.

With less than 40 days to go until election day (as of the date of this event), what is the outlook for U.S. election security? How have cyber warfare tactics from actors like Russia, China, and Iran progressed and tested U.S. voting systems? What lessons can the U.S. follow from other developed countries to prepare its election security for the future?

*Members of the public may register for this discussion by clicking here.*