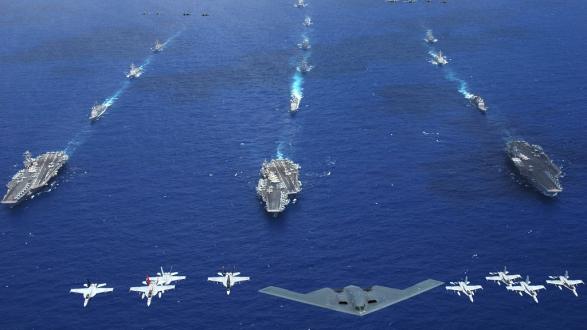 A Fleet Week lunch discussion with leaders of the U.S. Coast Guard and U.S. Navy on the state of global security and the challenges of defending the United States and its allies.

Fleet Week is an annual, multi-day event celebrating our U.S. armed forces at our nation's number one port, the Port of Los Angeles. It was created through a unique public-private partnership to connect Southern Californians with the men and women of the United States' Sea Services. These connections are facilitated through numerous outreach and engagement opportunities across the region and at a centralized event location on the LA Waterfront at America’s largest port. The week features active duty ship tours, military displays and equipment demonstrations, live entertainment, aircraft flyovers, and more.

The Pacific Council is also hosting a tour of a Navy warship as part of Fleet Week. Learn more here.

Rear Admiral Peter W. Gautier assumed his duties as Commander, Eleventh Coast Guard District, in June 2018. As such, he oversees the Coast Guard’s safety, security, law enforcement, and environmental stewardship operations from the California-Oregon border to Peru including Arizona, Utah, and Nevada. He also serves as a Deputy Director for the Department of Homeland Security's Joint Task Force West. Read more.

Rear Admiral Darren J. Hanson's first tour was aboard PCU George Washington (CVN 73), during which he was certified as engineer by Naval Reactors. In 2012, while in command of Coastal Riverine Squadron 11, Hanson deployed to the United Arab Emirates as commander, Task Group 56.7, providing security for U.S. ships and maritime infrastructure. He reported as deputy commander, U.S. 3rd Fleet, in 2017. Read more.

Captain Downey retired from the Coast Guard in June 2018 after serving over 26 years on active duty. She most recently served as Sector Commander and Captain of the Port for U.S. Coast Guard Sector Los Angeles – Long Beach from 2016-2018. Read more.

THE MILITARIZATION OF LAW ENFORCEMENT
BEYOND THE HORIZON: DIVERSITY AS A NATIONAL SECURITY ISSUE
THE 23rd ANNIVERSARY OF THE HANDOVER & THE FUTURE OF HONG KONG