EU on the Brink? U.S.-Germany Relations in a Time of Crisis 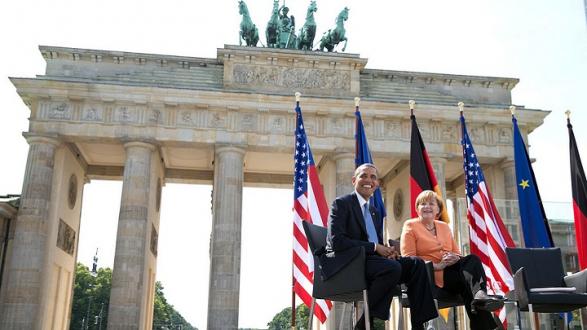 A discussion on Europe's future in a time of unprecedented crisis, featuring Ambassador John B. Emerson, U.S. Ambassador to Germany, and Ms. Kimberly Marteau Emerson, Advisory Board Member of the USC Center on Public Diplomacy.

Refugees continue to flood Germany and the rest of Western Europe. Britain's referendum to leave the European Union is right around the corner. Tensions between NATO and Russia continue to build.

Will the European Union remain America's best partner in meeting the world’s challenges? How has the U.S.-Germany relationship evolved over President Obama's two terms in office? Can Europe overcome the political, social, and economic crises that plague it?

Ambassador John B. Emerson served on President Obama’s Advisory Committee for Trade Policy and Negotiations. Previously, he served as President of Capital Group Private Client Services from 1997 to July 2013, and on President Clinton’s senior staff from 1993-1997. Read more.

Ms. Kimberly Marteau Emerson is an attorney and civic leader. She worked in the Clinton Administration as Director of Public Liaison for the U.S. Information Agency (USIA). She also serves on the international board of Human Rights Watch. Read more.

Dr. Jerrold D. Green has served as the President and Chief Executive Officer of the Pacific Council on International Policy since 2008. Read more.