BEYOND THE HORIZON: IMMIGRATION, COVID-19, DACA, AND AMERICA'S FUTURE 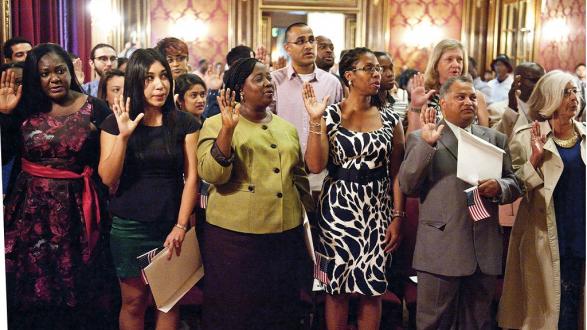 A panel discussion as part of the Beyond the Horizon summit, on the future of U.S. immigration policy and how the pandemic has impacted it.

Immigration remains at the forefront of the U.S. national debate, particularly as the pandemic has threatened more and more populations with displacement. From DACA recipients to international students facing the prospect of losing their visas, COVID-19 has underscored the sensitivity of a political response on immigration. This discussion will explore how COVID-19 has affected migrants and immigration policy in the United States and globally.

Judge Tabaddor is the current President of the National Association of Immigration Judges (NAIJ).  She was appointed to the bench as an Immigration Judge in November of 2005.  She has presided over the detained, non-detained, juvenile and mental competency dockets.  Prior to her appointment, she served as an Assistant U.S. Attorney for the Central District of California in Los Angeles. She also served as a trial attorney with the Justice Department’s Civil Division in Washington D.C., and as a law clerk and attorney advisor for the Immigration Court and the Chief Immigration Judge. She received her B.A., cum laude, from UCLA, and her law degree from UC, Hastings College of the Law. In addition to her duties as a judge, Judge Tabaddor is an adjunct professor with the UCLA School of Law.

Judge Tabaddor is actively involved with the legal and the non-legal community, mentoring and speaking regularly before bar associations, conferences, symposiums, organizations and schools.  She is on the Board of Advisors of the Federal Bar Association’s Immigration Law Section.  She is an active member of the Pacific Council on International Policy, and a member of the National Association of Women Judges.

Judge Tabaddor is appearing in her capacity as the President of NAIJ and not as a representative of the Department of Justice. Read more.