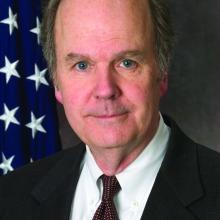 Robert C. Bonner has extensive government service. He was confirmed as the Commissioner of the U.S. Customs Service one week after the attacks on 9/11. Shortly thereafter, as part of the homeland security reorganization, he was appointed the first Commissioner of U.S. Customs and Border Protection (CBP), the unified border agency created to manage and secure our nation’s borders. As Commissioner, Mr. Bonner launched revolutionary initiatives, including the National Targeting Center, the 24-Hour Rule, the Container Security Initiative, the Customs-Trade Partnership Against Terrorism and U.S. Visit, using the broad border authority to protect the country against the threat of global terrorism by preventing terrorists and terrorist weapons from getting into the U.S. He served as Commissioner until 2006.  Prior to becoming Commissioner, Bonner government service included being the head of the Drug Enforcement Administration (DEA), a federal district judge in Los Angeles, and the United States Attorney for the Central District of California. A former partner of Gibson, Dunn & Crutcher, Mr. Bonner is currently counsel to the firm and the senior principal of the Sentinel Policy and Consulting Group, a homeland security consulting firm based in Washington, D.C. and is also engaged in alternative dispute resolution as an arbitrator and mediator.