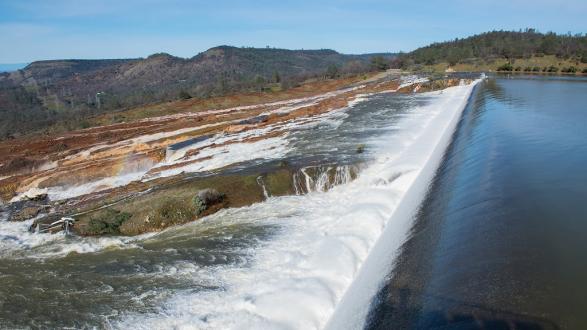 The plan obviously raises a myriad of policy issues. But anyone inclined to vote for the initiative should be particularly concerned with the implications for the state’s most critical resource: water.

As Mark Twain reputedly quipped, water is for fighting over. Dividing California into three states is certain to cause a fracas unprecedented in our already contentious water history.

Some intrastate rivers would suddenly become interstate rivers, raising the question of how much of these rivers would be owned by which state. Southern California and Northern California would share the San Joaquin River, for instance, which flows northwest from the southern Sierra. Would one of the states get the bulk of the water, or would they share halfsies?

Although the two states could agree on an allocation, perhaps based on historical use, such agreements face tough political headwinds. Increasingly, states are suing each other over interstate rivers, and only the U.S. Supreme Court can hear such disputes. Resolution can take many years and cost millions of dollars in legal fees.

After more than a decade of litigation, the Supreme Court determined in 1963 that California is entitled to 4.4 million acre-feet from the Colorado River. If California splits, which state gets this entitlement?

After more than a decade of litigation, the Supreme Court determined in 1963 that California is entitled to 4.4 million acre-feet from the Colorado River, whose water is shared with six other states and Mexico. Coastal cities from San Diego to Ventura rely on this water, as do a handful of desert water agencies. If California splits, which state gets this entitlement?

Los Angeles and Ventura would be part of the new, entirely coastal state of California, which would not abut the Colorado River. (The river flows along the border of what would become Southern California.) Neither city lies within the Colorado’s watershed. States generally cannot claim a right to part of a distant river to which they have no geographical connection, raising possible questions regarding LA’s and Ventura’s right to Colorado River water.

The proposal also raises the question of how groundwater would be regulated. In 2014, California became the last state in the West to adopt statewide groundwater regulations. Previously, many regions of the state overdrew from their groundwater aquifers, lowering water tables, drawing in coastal salt water, and risking subsidence.

We can avoid drawing new political boundaries that will saddle future generations with even worse water wars.

Californians have approved water bonds to pay for new infrastructure and conservation measures. Under the proposal—again, unless the legislature decides otherwise—California’s current debt would be divided proportionately by population. Northern Californians could end up paying for water projects in California and Southern California, or vice versa. It’s unclear who would get to spend the funds that are not yet committed.

In the 1870s, the federal scientist and explorer John Wesley Powell urged Congress to organize western states by watershed. Powell’s approach would have shaped each political unit around a river rather than splitting rivers into multiple parts, thereby limiting interstate rivers and the disputes they create. Instead, Congress drew arbitrary political lines across the West, generating decades of interstate water disputes.

It’s too late to fix that mistake. But we can avoid drawing new political boundaries that will saddle future generations with even worse water wars.

Barton H. Thompson is a professor of natural resources law at Stanford Law School and an attorney with O’Melveny & Myers. Watch a video of Thompson speaking at the Pacific Council’s 2017 Water Conference here.

Matthew Kline is a Pacific Council member and a partner at O’Melveny & Myers.

Heather Welles is an associate with O’Melveny & Myers.

This article was originally published in the Los Angeles Times.