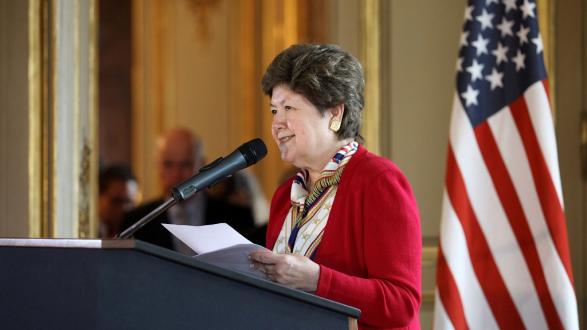 Pacific Council director Ambassador Vilma Martínez has been selected to receive the World Trade Week 2017 Stanley T. Olafson Bronze Plaque Award. Presented by the Los Angeles Chamber of Commerce since 1933, the award honors a member of the international trade community whose outstanding dedication, efforts, and achievements in the field have advanced global trade in the Southern California region.

The award is one of the Chamber’s oldest and most prestigious honors. It emphasizes efforts to increase awareness of the positive impact that international commerce can have on our region’s economy.

"This year a selection committee of Chamber board members and past STO recipients found Ambassador Martínez’s outstanding accomplishments in international trade to be exemplary for the award," the Chamber wrote in an email.

Ambassador Martínez currently serves as president of the Los Angeles Harbor Commission, which oversees the management and operation of the Port of Los Angeles, the number one port in the nation by container volume. The Commission under her leadership manages the promotion of maritime, commerce, navigation, fisheries, and public access to the Harbor District waterfront. She was also the first woman to represent the United States in Argentina as Ambassador. In 2013, she was awarded the Order of May in the grade of Grand Cross––the highest honor awarded by Argentina to a foreign national––presented by the president of Argentina in recognition of her work on behalf of improving mutual cooperation and understanding.

"Ambassador Martínez has had a uniquely successful and distinguished career in helping to promote and expand global trade opportunities in Southern California and beyond," said Pacific Council President and CEO Dr. Jerrold D. Green in a letter nominating Ambassador Martínez for this award. "Her long and distinguished career in public service and her work in expanding global trade opportunities, especially in Southern California, make her a uniquely and richly qualified choice for the 2017 Stanley T. Olafson Award."

Ambassador Martínez will receive the award at the 91st annual World Trade Week Kickoff Breakfast on May 4 in Los Angeles.