Vietnam’s Balancing Against China in the South China Sea 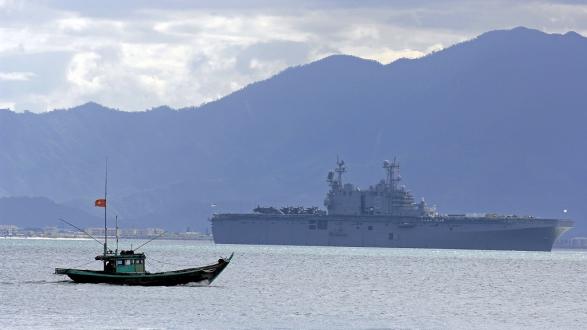 For a country that has traditionally preferred low-key diplomacy to avoid antagonizing its larger neighbor to the north, Vietnam last month publicly engaged in a string of activities to strengthen deterrence against China in the South China Sea. Last month offered some indicators within the shift in Vietnamese defense strategy to address growing concerns over China's military expansion and assertiveness in the region.

On March 2, Vietnamese President Tran Dai Quang visited India to meet with Prime Minister Narendra Modi. On March 3 in a joint statement, the two leaders pledged to continue their defense collaboration to include senior dialogues, arms procurement, port calls for navy and coast guard ships, and capacity-building projects. Quang and Modi also reaffirmed the importance of upholding freedom of navigation and overflight in the South China Sea as well as peaceful and legal settlement of disputes.

But most striking was Hanoi's decision to endorse the need for India and Vietnam to work together to ensure "a peaceful and prosperous Indo-Pacific region"—apparently the first time a Vietnamese leader has ever done so. Quang was likely reciprocating in good faith to Indian geostrategic interests, given New Delhi's outspoken stance on the South China Sea.