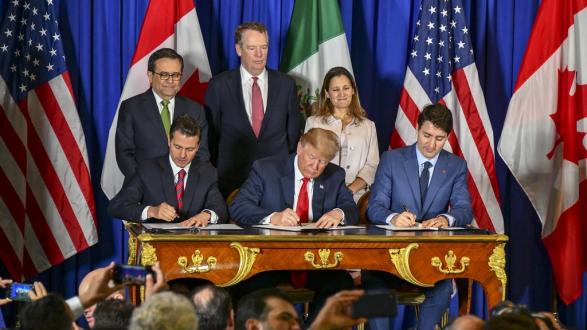 The Protocol, detailed below, won over the AFL-CIO, which garnered the support of the Democratic leadership in the House without losing the backing of the Trump administration or the Mexican government.

All parties—including Mexican President Andrés Manuel López Obrador (AMLO)—proudly declared victory…until the U.S. implementing legislation was made public. But a dispute over specific language in the legislation was quickly resolved, allowing the House to pass it and send it to the U.S. Senate, which is expected to ratify the agreement in early 2020.

A ratified USMCA, hopefully, will boost a Mexican economy that has officially fallen into recession.

A ratified USMCA, hopefully, will boost a Mexican economy that has officially fallen into recession.

After weeks in which congressional Democrats and U.S. Trade Representative Robert Lighthizer were said to be on the verge of agreement, the negotiations hit a serious snag. On December 2, the leading Mexican business confederation, the CCE, made public and sharply rejected a core Democratic ask—permitting on-site inspections by U.S. investigators of Mexican firms accused of labor violations.

The following day in his morning news conference, AMLO made Mexico’s position clear—it is unacceptable for U.S. inspectors to verify that Mexican companies are meeting their responsibilities under Mexican law. Voices coming out of Mexico—the government, the private sector, and analysts—began to hedge their bets, fearing that a final agreement may not be reached before the holidays, leaving ratification to early 2020. Then things appeared to fall into place.

The Democrats seemed to walk back their inspection proposal, suggesting that enforcement could be achieved without the unilateral on-site U.S. inspections Mexico had vetoed. The Protocol establishes a complex, bilateral process for verifying Mexican compliance with the labor provisions of the USMCA (free association and collective bargaining) embodied in new Mexican labor laws (specifically, transparent and democratic elections for union leadership and approval of collective agreements).

If the company is found to be in violation of labor regulations, its U.S.-bound exports will be subjected to a proportional penalty. This apparently was enough to win the support of the AFL-CIO, which in turn enabled House Democrats to back the agreement.

According to a press release from House Democrats at the time, the verification process would include an inter-agency committee and on-the-ground labor attaches to monitor compliance. But absolutely no mention is made of this in the Protocol.

The Protocol instead provides that should a Mexican facility producing goods for export to the United States in manufacturing, services, or mining be accused of not complying with the agreement, Mexico will have 45 days to resolve the matter before it goes to a three-member bilateral panel of labor experts (one member selected at random from each of three lists: one consisting of Mexican experts provided by Mexico, one from a list of U.S. experts provided by the United States, and one from a list of experts who are non-nationals of the United States or Mexico and selected by consensus) to adjudicate the matter.

If the company is found to be in violation of labor regulations, its U.S.-bound exports will be subjected to a proportional penalty. This could include a suspension of tariff preferences or the imposition of penalties for a first offense, or the denial of entry of goods for a second offense. This apparently was enough to win the support of the AFL-CIO, which in turn enabled House Democrats to back the agreement.

Beyond labor, the other main change to the original USMCA was the elimination of a provision establishing 10 years of patent protection for biologics, a class of drugs produced from living organisms. But several other provisions related to pharmaceutical intellectual property rights protection were also modified. This includes the elimination of the obligation to provide patents for additional uses of known products, additional limitations on patent term adjustment for regulatory delays, and modifications to the patent linkage system including the opportunity to grant incentives for generic competition.

The Protocol also ensures the right of third parties (in other words, generic manufacturers) to make, use, sell, offer to sell, or import products covered by a patent for the purpose of generating data for market authorization (akin to the Bolar Amendment in the United States). These changes are somewhat unusual since previous U.S. trade agreements have prominently protected drug patents; indeed, weaknesses in the pharmaceutical intellectual property rights language were often cited as a rationale for Republican opposition to the Trans-Pacific Partnership. But these changes represent a win for congressional Democrats who hope they will help reduce drug prices.

On the environment, the Protocol amends the original USMCA text to state that any alleged violation of environmental laws is presumed to affect trade or investment. Previously, the party alleging the violation had to demonstrate the connection to trade or investment in order to pursue dispute settlement (a similar change was made with respect to labor). The Protocol also obliges the signatories to comply with seven specific multilateral environmental agreements.

All parties have hailed the new agreement: Trump, who has finally fulfilled his campaign promise to replace NAFTA; Pelosi and the Democrats, who won major concessions from the Trump administration and created what they consider to be the first labor-friendly U.S. free trade agreement; and AMLO, who was able to close the door on the uncertainties afflicting investors owing to questions about the future of NAFTA.

Finally, the Protocol seeks to eliminate the potential for a signatory to block establishment of a dispute settlement panel. It does this by (1) changing language to ensure that a panel is automatically established upon delivery of a request and (2) mandating that the signatories establish and maintain a roster of dispute settlement panelists by the time the agreement enters into force and by allowing the roster to be established even if consensus is not reached on its composition.

The result of these negotiated changes is an updated trade agreement for North America that has deep bipartisan support in a way that has been lacking for years. All parties have hailed the new agreement: Trump, who has finally fulfilled his campaign promise to replace NAFTA; Pelosi and the Democrats, who won major concessions from the Trump administration and created what they consider to be the first labor-friendly U.S. free trade agreement; and AMLO, who was able to close the door on the uncertainties afflicting investors owing to questions about the future of NAFTA.

The latter is particularly important. AMLO—a politician who long opposed NAFTA—proudly stood behind his trade negotiator, Jesús Seade, as he signed the Protocol on behalf of Mexico.

Despite the last minute drama, ratification of the USMCA is back on track.

The Mexican Senate wasted no time and approved the revised USMCA on December 12. It appeared that the agreement was on a glide path to approval in the United States and Canada as well, but—in keeping with the winding nature of the entire negotiating process—one more hurdle came up that had to be overcome.

When the White House sent the agreement to the House of Representatives on December 15, the implementing legislation included the Democratic demands for two added provisions: the creation of a U.S. government inter-agency committee and, more problematically, five new U.S. labor attachés to the U.S. Embassy in Mexico City to monitor the progress of implementing the labor provisions of the agreement at Mexican firms.

The second provision appeared to directly cross the very same Mexican red line that had held up the Protocol earlier in December, and, unsurprisingly, caused Mexico to loudly and angrily reject it. The leader of Morena in the Mexican Senate, Ricardo Monreal, made clear that Mexico has the right to reject the new attachés. Jesús Seade rushed to Washington to find a solution that would not involve turning back U.S. diplomats.

The U.S. Senate is expected to take the agreement up in early 2020. With that, all sides can declare victory, and the USMCA should take effect in the very near future.

In a letter to his Mexican counterpart, Lighthizer made clear that the mere deployment of additional labor attachés to the U.S. Embassy in Mexico does not confer any new substantive rights on them in Mexico that have not been agreed to by the Mexicans. With this letter in hand, Seade pronounced the Mexican side satisfied, suggesting the issue was more a matter of optics than substance. Still, the depth of Mexican political sensitivity on this issue suggests that it could be a source of bilateral tension in the months and years ahead.

So, despite the last minute drama, ratification of the USMCA is back on track. The U.S. House of Representatives voted to approve it on December 19, and now it goes to the Senate, which is expected to take it up after President Trump’s impeachment trial in early 2020. We expect quick passage there, and, though Canada has not yet announced a date for its vote, we do not see any issues with ratification by the northern-most neighbor. With that, all sides can declare victory, and the USMCA should take effect in the very near future.

Michael Camuñez is a Pacific Council Director, head of the Council’s Mexico Initiative, and president and CEO of Monarch Global Strategies.