On the Rebound: U.S.-Taiwan Relations 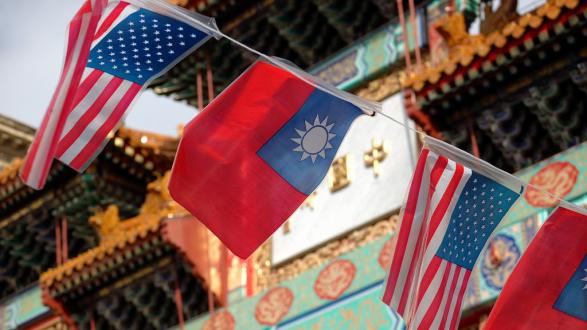 By:
James B Cutchin

By many measures, U.S.-Taiwan relations are closer today than they have been in nearly 40 years.

Beginning with a controversial presidential phone call in 2016, a steady stream of pro-Taiwan activity is redefining America's relationship with the island. Diplomatic, economic, and security cooperation are increasing in ways not seen since Washington severed official relations in 1979.

In March of 2018, passage of the Taiwan Travel Act made it official U.S. policy to accept diplomatic visits from all high-level Taiwanese officials. This broke with nearly four-decades of precedent declining official visits from Taiwanese heads of state. It passed with unanimous bipartisan support in both the U.S. House of Representatives and the Senate, a striking anomaly in the intensely divided American political climate.

"The Chinese government is flexing its muscles in every area. That has become alarming to [the] United States. The opposing voices against China are now bipartisan."

According to Kent Yang of the Taipei Economic and Cultural Office (TECO) in Los Angeles, Taiwan's de-facto embassy and consular system, there are several reasons for these trends.

"The Chinese government is flexing its muscles in every area," said Yang. "That has become alarming to [the] United States. The opposing voices against China are now bipartisan."

Yang said that strengthening U.S.-Taiwan diplomatic relations, largely forgone in the past out of a desire to avoid angering China, have become a greater possibility in the current political climate.

"The [Taiwan] trade office is doing more impact studies with certain industries and they're bringing more business reps over," said Cheung. "We've seen a lot more of these efforts to increase their reach and connections."

Representatives at the U.S. Department of Commerce's 2018 Select USA Investment Summit reflected these trends. The summit, which is the U.S. government's highest profile event dedicated to promoting foreign direct investment in the country, featured 125 business representatives from Taiwan. This was the largest delegation sent by any government, replacing China in the top position for the first time since the summit began in 2013.

"The [Taiwan] trade office is doing more impact studies with certain industries and they're bringing more business reps over. We've seen a lot more of these efforts to increase their reach and connections."

Cheung, who was present at the conference, said that reduced competition from China is likely one of the driving factors behind Taiwan's increased presence. In 2017, the Chinese government increased capital outflow restrictions on Chinese businesses and citizens. This has lowered competitive barriers in U.S. industries previously flooded with Chinese funds.

"Once that spigot stopped flowing, the way was cleared," said Cheung. "Now Taiwan and some of the other partners are more able and willing to step in and fill it."

Serena Yu, Yang's colleague and deputy director of TECO in Los Angeles, said that there are several other reasons for Taiwan's increased focus on foreign investment.

First, is the perception among many in the Taiwanese business community that the rule of law is being eroded in China. According to Yu, events such as the 2018 constitutional amendment that removed term limits for Chinese President Xi Jinping are signs of this trend.

"In his desire to rule this country for life, he [Xi] had to change their rules institutionally," said Yu. "This doesn't align with economic reform. So by this measure maybe, the situation in China is worsening and some investors want to move out."

Yu said that the emphasis on investment in the United States is also a reflection of long-standing Taiwanese policy to promote diversifying investments away from China.

Yu pointed to the New Southbound Policy, announced by Taiwanese President Tsai Ing-wen in 2016, as an example of this drive. The policy is designed to increase economic collaboration between Taiwan and other regional economies, particularly those of Southeast Asian nations.

According to the Taiwanese Ministry of Economic Affairs, Taiwanese investment in members of the Association of Southeast Asian Nations (ASEAN) increased by nearly 75 percent in 2016. Recent data from the ministry also indicates that that Taiwanese foreign direct investment in India more than doubled in 2017 and investment in Australia totaled more than $600 million over the same period.

"The day a U.S. Navy vessel docks in Kaoshiung, is the day that we reunite Taiwan by force."

While the increased economic cooperation is always welcome, there is one area of U.S.-Taiwan relations that Yang said his government's officials are more cautious about: security.

The 2019 U.S. National Defense Authorization Act promotes increased military cooperation between the U.S. and Taiwan. This includes, among other areas, encouraging U.S. Navy vessels to dock in Taiwanese ports.

"In practice, to allow an American Navy ship to dock in any Taiwan seaport will be a very high risk," said Yang. "That will definitely incur a strong response from mainland China."

Yang's concerns are not unfounded. In 2017, U.S. Chinese Embassy Minister Li Kexin reportedly said at an event for Chinese students that, "the day a U.S. Navy vessel docks in Kaoshiung, is the day that we reunite Taiwan by force."

Will this kind of gesture provoke mainland China and in the end harm Taiwan?"

Because of this anticipated response from China, Yang said he doubts that the United States will carry through with this particular provision of the National Defense Authorization Act. He also noted, however, that other areas of U.S.-Taiwan security collaboration such as arms sales, personnel visits, and exchanges have increased in accordance with the act's stated goals.

Yang said that, while his colleagues in the Taiwanese government welcome this type of security collaboration, many privately worry that a misstep could have grave consequences.

Yang said that these worries have resulted in measured reactions to U.S. overtures.

"In some cases, our government's response is very cautious," said Yang. "We only say, 'we welcome'. We only say we appreciate the American government's support to Taiwan."