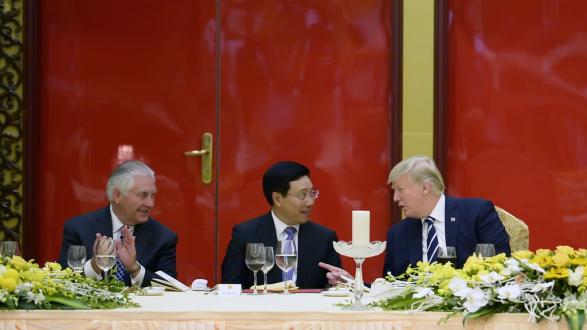 As the dust finally settles on President Donald Trump’s first Asia visit, observers have begun to criticize the administration for not accomplishing much during the whirlwind five-country, 12-day trip. These critics, however, should look more closely at Trump’s time in Vietnam, where something quite significant indeed occurred: the administration seized upon the positive momentum left over from the Obama administration to elevate U.S.-Vietnam defense cooperation to new and unprecedented heights. This development will be vital to both Vietnamese and U.S. strategic interests in the South China Sea for the foreseeable future.

Trump’s visit followed up on Vietnamese Prime Minister Nguyen Xuan Phuc’s May 31 discussion with the president at the White House. This meeting produced a joint statement recognizing the need to ensure freedom of navigation, peaceful settlement of disputed territorial claims in accordance with international law, and the development of a legally-binding Code of Conduct in the South China Sea—all implicit signals of opposition to China’s growing military presence and assertiveness in the region.

In Hanoi on November 11, Trump met with his counterpart President Tran Dai Quang and the two not only reiterated this language, but went further to announce the initiation of a three-year (2018-2020) memorandum of understanding to implement key components of prior bilateral defense agreements. While it is unclear precisely what this might entail, the announcement clearly suggests a deepening of ties.

Derek Grossman is a Pacific Council member and a senior defense analyst at the nonprofit, nonpartisan RAND Corporation. He formerly served at the Defense Intelligence Agency as the daily intelligence briefer to the Assistant Secretary of Defense for Asian and Pacific Security Affairs at the Pentagon.