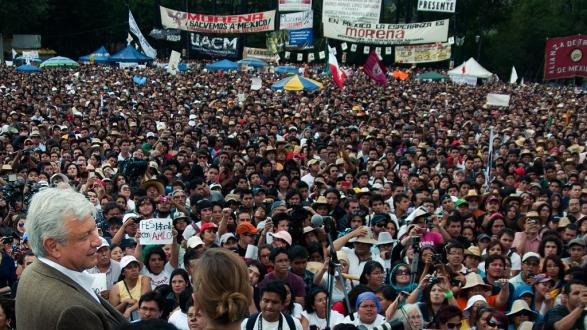 Although the new USMCA trade agreement awaits approval by the Canadian Parliament, it surmounted its toughest hurdle in the U.S. Congress late last year.

In a signing ceremony that quite visibly included Mexican and Canadian officials but excluded U.S. Democrats, President Trump signed the USMCA into law on January 29. Ratification by the Canadian Parliament was supposed to be an easy lift given support from both the Liberal and Conservative parties. But opposition from regional parties has slowed the process, with ratification now not expected to take place until April.

Back in the United States, Democratic presidential candidate Bernie Sanders has promised to immediately renegotiate the USMCA if he is elected, arguing that the environmental protections need to be reinforced. However, Inside Trade (subscription required) reports that congressional Democrats who participated in last year’s negotiations appear to have little interest in renegotiating an agreement they see as a big win for their labor allies.

Even without the USMCA in place, U.S.-Mexico trade increased 0.5 percent last year, which, when coupled with the large decrease in U.S.-China trade, positioned Mexico as the top trading partner of the United States for 2019. And even once the USMCA is in place, it seems unlikely that U.S. threats to impose tariffs on Mexican exports will disappear. With Florida tomato growers pressing for protection in an election year, tariffs are already on the menu for 2020.

Together, Mexican actions and policy results have earned the Trump administration’s gratitude.

According to U.S. Border Patrol statistics, border apprehensions of undocumented migrants dropped 75 percent from May to December last year. In early 2020, the Mexican government blocked another large migrant caravan from crossing Mexican territory to the United States. Together, Mexican actions and policy results have earned the Trump administration’s gratitude.

In a January interview with Televisa, President Trump’s senior advisor and son-in-law, Jared Kushner, noted that the two countries have “achieved substantial advances” on the migration and security fronts, and that overall “relations are much better than they had been for a long time” and “the capacity for a respectful dialogue means that our countries are closer every day.”

The advances on security matters came after two apparently pointed visits by U.S. Attorney General William Barr to Mexico. During his second visit in early January, Barr is reported to have told Mexican officials that they had six months to reduce the flow of fentanyl into the United States. Soon thereafter, the Mexican government beefed up its anti-drug activities. It brought the Mexican Marines, who had been largely sidelined by President Andrés Manuel López Obrador’s (AMLO) policy preference for “hugs not bullets,” back into the fight, and increased the number of criminal extraditions to the United States.

Mexico’s homicide rate registered another record high in 2019, increasing 2.7 percent to a total of 35,588 murders. While the rate declined in January by 1.2 percent, one month alone is not a trend. Meanwhile, the Bank of Mexico reported an increase in extortion and blackmail which dates to late 2018, and in late January three prisoners, including the head of finances for the Sinaloa drug cartel, escaped from prison in a van dressed as custodians.

In addition, the country has been convulsed by rising violence against women including the recent brutal murders of a young woman and a girl. There was a 10 percent increase in femicide in 2019, reaching a total of 10 killings per day. Outraged women protested and painted slogans on the National Palace, where the president lives and works. But the outrage extends beyond women. A reputable poll shows that Mexicans believe that this problem was the worst one of 2019.

Unable to find the right tone, AMLO’s reaction seemed to lack empathy. Rather than announce a new anti-crime program to respond specifically with this challenge, he has blamed the problem on neoliberalism, on the uproar in the media, and on conservatives. In response, protest leaders called a march on Sunday, March 8, and a women’s strike on Monday, March 9. A prominent academic supporter of the president then suggested that these protests were designed to prepare the groundwork for a “soft coup d’etat.”

The Mexican economy fell into a shallow recession in 2019, even as wages for average Mexicans increased. The outlook for 2020 is not much better.

To deal with Mexico’s crime problem, Attorney General Alejandro Gertz Manero informally presented a legal system reform to the Senate on January 15. Key Senators were dubious of what was a tough on crime initiative, and when the plan leaked, legal scholars and defenders of human rights blasted the proposal as a return to authoritarian tactics.

For example, the reform would have reestablished detention for up to 80 days for any type of crime without charges being filed (this tool is currently limited to organized crime), allowed the admissibility in court of illegally obtained evidence, eliminated judges whose job is to guarantee the rights of defendants, and transferred from judicial authorities to the Senate the power to designate judges and magistrates, effectively eliminating judicial autonomy.

Facing this onslaught and divisions within his own administration, AMLO withdrew his support for the initiative in early February. This, combined with opposition within the cabinet to his initiative and budget cuts for the Attorney General’s office, apparently angered Gertz Manero and has distanced him from AMLO. He is reported to have complained: “If they don’t give me the necessary instruments, I won’t be able to do anything about violence and the absence of justice in the country.”

Taking advantage of still sky-high approval, AMLO is pressing Congress to complete work on the legislative components of his “fourth transformation” program for Mexico.

Finally, three events related to corruption in Mexico stood out in recent weeks. First, the head of Pemex during the presidency of Enrique Peña Nieto, Emilio Lozoya, was arrested in Spain and is now awaiting extradition to Mexico on corruption charges. Second, the Wall Street Journal (subscription required) reported that the Mexican government is also investigating Peña Nieto in relation to the Lozoya case.

AMLO immediately denied, however, that the former president is being investigated and insisted that his government will not bring any charges against ex-presidents. And third, an academic/columnist was fined a half million dollars for accusing a former Mexican governor, who had clearly become wealthy while in office, of corruption raising questions about press freedom in Mexico.

The Mexican economy fell into a shallow recession in 2019, even as wages for average Mexicans increased. The outlook for 2020 is not much better, with independent growth estimates ranging from 0.5 percent to 1.5 percent. This is due to continuing high interest rates, low business confidence, and challenges at Pemex where AMLO appears unlikely to accept the reopening of private sector auctions or Pemex farmouts this year. This raises questions about the national oil company’s ability to avoid a downgrade of its bonds to junk, despite having stabilized production by the end of 2019.

The sluggish economy also raises questions about the government’s broader capacity to sustain its social welfare programs and infrastructure projects while also protecting the fiscal stability that AMLO so highly values. At the same time, the messy rollout of the new Institute for Health and Well-Being (INSABI)—designed to make primary and secondary health services free to all Mexicans—and new criticism of AMLO’s three-airport solution to Mexico City’s air transport problems, continue to raise questions about the viability of AMLO’s signature programs.

According to Kushner, U.S. relations with Mexico are “much better than they have been for a long time.” This includes collaboration on migration policy and now on security matters as well.

Taking advantage of still sky-high approval, AMLO is pressing Congress to complete work on the legislative components of his “fourth transformation” program for Mexico. Since the fall legislative session will likely be distracted by the initiation of the 2021 electoral process, we expect the current legislative session to be a busy one. The legislature should easily approve most of AMLO’s proposals, including eliminating the autonomy of the National Electoral Institute, despite a deep division in the governing Morena party that recently broke into the open.

According to Kushner, U.S. relations with Mexico are “much better than they have been for a long time.” This includes collaboration on migration policy and now on security matters as well. And within Mexico, the get tough on crime approach of a legislative proposal informally presented by the attorney general divided the government and produced sharp opposition from legal scholars and human rights advocates, and it died when AMLO turned against it.

AMLO’s approval remains sky-high at 72 percent in the most recent El Financiero poll. This poll also notes rising support for AMLO’s policies, including the economy, the battle to reduce poverty, and the fight against corruption. It also shows over 50 percent support AMLO’s security policy. These numbers seem to reflect the situation of the 70 percent of Mexicans who earn the equivalent of three minimum wages or less. They benefited last year from an increase in the minimum wage and higher remittances, but also from AMLO’s programs to provide student grants, youth internships, and old age pensions and to promote reforestation.

Indeed, about 25 percent of the population benefited either directly or indirectly from these programs, likely shaping their perception of the effectiveness of the AMLO government. Still, the continuingly large gap between support for AMLO and support for his policies is not considered sustainable, suggesting a drop in his poll numbers are in the offing.

Although the new USMCA trade agreement awaits approval by the Canadian Parliament, it surmounted its toughest hurdle in the U.S. Congress late last year.

AMLO will take advantage of these poll numbers as he presses the Congress to complete the legislative agenda for his “fourth transformation” of Mexico. The current legislative session, which extends until the end of April, will be particularly busy. As stated in his December 1 address to the nation, AMLO believes the essential elements of the fourth transformation need to be in place by the end of 2020.

This includes transforming his social welfare policies into a constitutional right (his top legislative priority), reducing government financing for political parties, naming four new members to the National Electoral Commission board (more on this below), eliminating Mexico’s special legal code (fuero) for public servants, reforming the law that governs the attorney general’s office, and regulating outsourcing in the private sector. Adding to the urgency, the start of the 2021 election process later this year is apt to undermine the efficacy of the fall legislative session, thus concentrating activity in the current session.

Michael Camuñez is a Pacific Council Director, head of the Council’s Mexico Initiative, and president and CEO of Monarch Global Strategies.