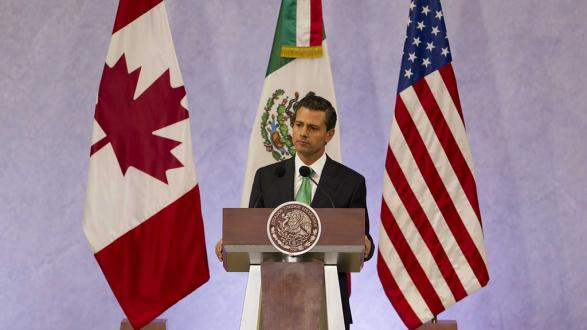 In a recent article for MacroGeo, an online international affairs journal, I argued that, in the Trump era, a non-cooperative outcome between Mexico and the United States on trade matters is all too likely, but a cooperative scenario remained plausible.  In the weeks since that opinion was published, events have led me to modify the argument a bit. Now it seems that, while a non-cooperative outcome remains possible, the cooperative scenario is increasingly likely. Still, the trading relationship is unlikely to return to the pre-Trumpian status quo any time soon.

Candidate Trump’s emphasis on the North American Free Trade Agreement (NAFTA) as a "disaster" was a bad sign for the 23-year old trade agreement. He insisted that the U.S. trade deficit with Mexico demonstrated it was a bad deal for Americans, he threatened to impose high tariffs on imports from Mexico or to pull the United States out of the treaty as a means to coerce Mexico into giving him what he wanted, and he implied that the trading relationship was inevitably zero-sum.

Equally troubling was the strong reaction Trump’s threats elicited from Mexico. While Mexico expressed its willingness to renegotiate NAFTA (there are, after all, many ways in which it can be improved), the Peña Nieto administration also made clear that it would walk away from the negotiations if Washington attempted to raise current tariff levels or impose quotas, or if the result did not advance Mexican national interests. The result was a fairly bleak scenario for the future of NAFTA in late January and early February.

An ongoing series of bilateral meetings and reassuring statements have helped to reduce tension and point toward a more constructive context for a NAFTA renegotiation.

In the ensuing weeks positive signs emerged from within the Trump trade team. An ongoing series of bilateral meetings and reassuring statements have helped to reduce tension and point toward a more constructive context for a NAFTA renegotiation. In March, Commerce Secretary Wilbur Ross spoke of a "sensible negotiation" of NAFTA; Peter Navarro––the head of the White House National Trade Council and the most protectionist member of Trump’s economic team––spoke of the NAFTA countries uniting to create a manufacturing "powerhouse"; and U.S. Trade Representative-designate Robert Lighthizer emphasized pragmatism over protectionism in his Senate confirmation hearing.

Most importantly, the Trade Representative’s office sent a draft notice informing Congress of the administration’s intention to begin the NAFTA renegotiation. The notice calls for a tweak rather than a massive rewrite of the agreement, calling for expanded market access for U.S. goods and services, the inclusion of safeguard clauses to protect industries from sudden import surges, and changes to government procurement rules.

Markets have calmed as a result, as have nerves in Mexico City. Nevertheless, the day after the draft NAFTA notice began to circulate on Capitol Hill, as if to counter any impression that the administration was going soft on trade, President Trump signed an executive order calling for the reexamination of all 14 U.S. free trade agreements beginning with NAFTA. Meanwhile, Secretary Ross and White House spokesman Sean Spicer insisted separately that the administration’s thinking on trade had not changed.

This Washington two-step reinforced Mexico’s efforts to press ahead with its Plan B, in case NAFTA does not survive the renegotiation effort. It initiated talks with Latin American, Asian, and European partners to diversify its trading relations and thereby reduce its dependence on the U.S. market and consequent vulnerability to U.S. coercion. These efforts have included outreach to China, the European Union, and Argentina and Brazil. It also includes a recent agreement between Mercosur (Argentina, Brazil, Uruguay, and Paraguay) and the Pacific Alliance countries (Mexico, Colombia, Peru, and Chile) to begin negotiations to establish freer trade between the two trading groups.

Mexico has lost trust in the willingness of the United States to behave as an equal partner rather than throw its considerable weight around to get its way.

The recent events of the campaign and the early Trump administration have painfully reminded Mexico that the United States is at once its greatest potential international partner and its greatest potential foreign threat. Mexico has lost trust in the willingness of the United States to behave as an equal partner rather than throw its considerable weight around to get its way – to collaborate rather than dictate. As a result, Mexico’s concerted efforts to find new sources of food imports and new markets for manufactured exports are unlikely to abate even if NAFTA is quickly and successfully renegotiated later this year or early next.

The talks are now expected to begin in late summer and, while hardnosed bargaining should be expected, a U.S. or Mexican withdrawal seems less likely now than at any time since the election of Donald Trump to the U.S. presidency. However, we are dealing with Donald J. Trump, whose economic team includes protectionists, whose more internationalist trade advisors talk about pursuing "fair" trade, and who prides himself on being unpredictable. Nothing is set in stone.
_____________________

Pamela K. Starr is a Pacific Council member, the director of the U.S.-Mexico Network, a senior advisor at ManattJones Global Strategies, and an associate professor of teaching in the School of International Relations and in Public Diplomacy at the University of Southern California.