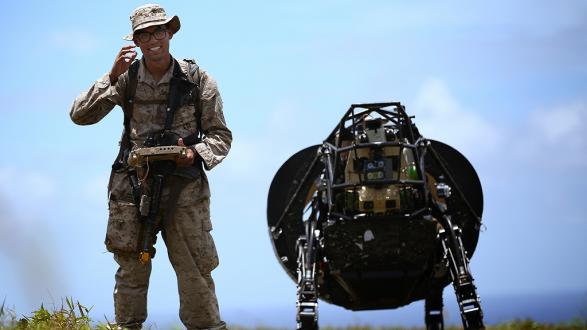 Two broad sets of U.S. military strategies during the second half of the twentieth century combined ideas, innovation, and technology in ways that offset Soviet conventional (and later nuclear) superiority in arms and military forces. These strategies also contributed to the overall state of cold war, as opposed to hot war, between the two superpowers.

Today, the Pentagon is hard at work on a framework to achieve military dominance over a far more diverse set of adversaries. The defining features of this strategy are automation and artificial intelligence, and the core challenge is to determine whether they enhance international peace and stability or put these ideals at risk.

President Dwight Eisenhower recognized that the U.S. military was no match for the sheer size of the Soviet Union’s Red Army, especially in Europe, the central theater of that era. He understood that financial pressures, among other factors, would make it impossible for the United States to compete against its principal adversary on a conventional military level. His response was to invest in American nuclear superiority as a strategic offset.

Over time, Eisenhower’s New Look policy of offsetting Soviet conventional power with a major arsenal of nuclear weapons was met with a buildup of Soviet strategic nuclear forces. In turn, Secretary of Defense Harold Brown supported the expansion of research and development, as well as the fielding of precision-guided weapons, new intelligence, surveillance, and reconnaissance (ISR) apparatus, and other cutting-edge weapons systems. Like New Look, this so-called second offset strategy capitalized on the technological superiority of the United States. President Ronald Reagan continued the investment in advanced military technology, and U.S. military overmatch contributed to the defeat of the Soviet Union in the Cold War.

Highly competitive with the United States in cyber and electronic capabilities, the Chinese and the Russians have theater-wide networks that rival the technological sophistication of U.S. battle networks.

In recent years, however, China and Russia have made significant advances in all types of technologies, including conventional weapons such as those developed by the United States in the second offset period. Highly competitive with the United States in cyber and electronic capabilities, the Chinese and the Russians have theater-wide networks that rival the technological sophistication of U.S. battle networks, and middle-tier powers are stockpiling advanced weapons. Former Secretary of Defense Chuck Hagel tackled twenty-first century threats from great powers, other state actors, and transnational threats in a speech at the Reagan Library on November 15, 2014, and announced a framework for prevailing against a range of competitors: "Technologies and weapons that were once the exclusive province of advanced nations have become available to a broad range of militaries and non-state actors, from dangerously provocative North Korea to terrorist organizations like Al Qaeda and Hezbollah—all clear threats to the United States and its allies." Hagel also identified cyber-attacks and transnational criminal activity as additional threats to U.S. security.

The development of anti-access and aerial denial (A2/AD) capabilities by Iran, Russia, and other states is particularly worrisome for the U.S. defense community and is seen as another rationale for the third offset strategy. Defense analysts note that these capabilities could compromise the ability of the United States to protect NATO allies, deter the Chinese in areas of competition, and project power globally.

To counter the various global threats, Secretary Hagel proposed the Defense Innovation Initiative: "Today I’m announcing a new Defense Innovation Initiative—an initiative that we expect to develop into a game-changing third ‘offset’ strategy. Our technology effort will establish a new Long-Range Research and Development Planning Program that will help identify, develop, and field breakthroughs in the most cutting-edge technologies and systems—especially from the fields of robotics, autonomous systems, miniaturization, big data, and advanced manufacturing, including 3D printing. This program will look toward the next decade and beyond."

The architects of the strategy seek operational advantage for the United States through breakthrough technologies.

As Kori Schake has observed, the third offset is not a well-defined strategy. It is, however, an organizing framework that pulls together some of the threads of ideas, technology, and innovation expressed in Hagel’s speech as well as in statements by former Secretary of Defense Ash Carter, Deputy Secretary of Defense Robert Work, and other military strategists. According to Work, "the Third Offset Strategy...is not about technology per se; it is about technology-enabled operational and organizational constructs that give us an advantage at the operational level of war, which is the surest way to underwrite conventional deterrence."

The architects of the strategy seek operational advantage for the United States through breakthrough technologies involving artificial intelligence, automation, human-computer interaction, new ideas and doctrines, and institutional reorganization. This operational mix requires a kind of analytical innovation that is in tune with a range of international threats far exceeding the danger posed by one nation, the Soviet Union, during the Cold War. This diverse threat vector is a feature that distinguishes the strategies used in the Cold War from the offset strategy of this century.

In addition to his speech at the Reagan Library, Secretary Hagel sent a memorandum on the Defense Innovation Initiative, which encompasses the third offset strategy, to the department's leadership team. He galvanized his comments by declaring that "American dominance in key warfighting domains is eroding." To counter this development, he proposed: rethinking how leaders and managers are identified and trained so that the best human capital is available for twenty-first century challenges; engaging in new long-range research and development efforts that will ensure the United States has the technological lead when it decides to project military power; using new war-gaming activities and operational concepts that will encourage alternative hypothesizing about security threats and technological innovation; and ensuring that all parts of the Defense Department are engaged in the effort, and that best business practices are infused throughout all of the department’s activities.

Are there any conditions under which robots should be allowed to kill humans?

In defensive scenarios, such as cyber warfare, time constraints and other exigencies may necessitate greater robotic autonomy. In offensive scenarios, however, the use of autonomous robots is fraught with numerous troubling implications. Are there any conditions under which robots should be allowed to kill humans? Warfare among robots from opposing sides could save soldiers from fighting, but it could also escalate conflicts to the nuclear level. While it is true that humans write the algorithms encoded in robots and computers, robots (and software programs) that are allowed to engage in warfare without constant human guidance could make decisions inconsistent with those made by a human in situations of extreme uncertainty.

These are just a few of the concerns that third offset strategists must consider as they make research investments and devise war plans. Robots are here to stay, and warfare and all sorts of international conflicts are being transformed by their use. Defense planners must guard against warfare becoming so futuristic that the human role in it is dangerously diminished.

As a tool of war rather than one of its causes, technological innovation will have to be paired with the innovation of ideas, strategy, and doctrine.

States and non-state actors will have varied assessments of autonomy and artificial intelligence. Thus, U.S. defense planners will be forced to make decisions in terms of strategic interaction. For instance, the United States may have ethical standards that are not adhered to by adversaries and competitors. Some adversaries may want weapons that are as autonomous and artificially intelligent as possible, and thus can shoot to kill on their own. It is hard to imagine the American public and their leaders deciding to embed that choice into strategy and doctrine. Theorizing about the full range of strategic interaction games is the reason that technology-driven war-gaming is as important now as it has ever been.

Politics, economics, religion, culture, personal ambition, and avarice are enduring causes of war. As a tool of war rather than one of its causes, technological innovation will have to be paired with the innovation of ideas, strategy, and doctrine. These latter factors have more to do with enhancing credible deterrence, peace, and stability than rapidly-changing exotic technologies.
____________________

Kiron Skinner is a Pacific Council member and the W. Glenn Campbell Research Fellow at the Hoover Institution.

A version of this article previously appeared in Strategika.