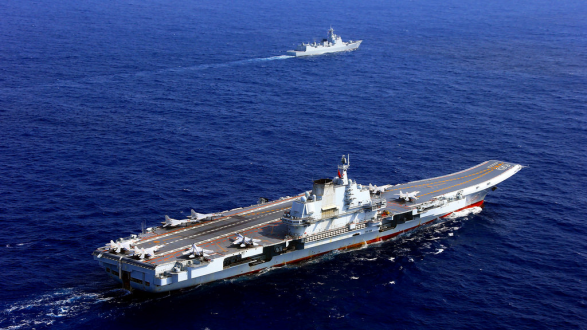 As China celebrated its annual "National Day" holiday in the first week of October, the U.S. Navy’s Pacific fleet led a show of force to deter China’s military actions. The destination of the showdown was Chinese-claimed waters in the South China Sea.

The South China Sea is one of the world’s most conflicted waterways, claimed by China, Vietnam, and multiple Southeast Asian countries. Abundant mineral resources and an estimated one-third of global shipping traffic in the area make it a hotly contested location.

For the United States, South China Sea’s significance lies not only in its resources and geographical importance; it also plays a vital role in reaffirming the United States’ influence in Asia and strengthening its position as a primary naval power, said Dr. James Tong, professor and director of the Center for East Asian Studies at UCLA.

During a discussion with Pacific Council members on September 20, Tong dissected the complicated U.S.-China relationship underlying disputes over the troubled waters.

From the American perspective, crucial national interests are attached to the South China Sea. In terms of economic interests, there’s a necessity to protect the maritime trade lanes that connect the United States to West Pacific nations including Japan and Korea. For diplomatic and military plans, several U.S. regional allies such as the Philippines and Malaysia are located in the area. Helping these smaller countries confront China’s military power allows the United States to enhance its presence in the Asia-Pacific region.

On the contrary, China, in addition to resolving the above concerns, has a strong incentive to acquire stronger control over disputed territories. "Seventy percent of the time, disputed territory goes to the occupant. It's not who were there first, it is who are there now," Tong said.

However, there is a different perspective on how to evaluate the legitimacy of China’s sovereignty over the area. Kuen-chen Fu, professor and dean of the South China Sea Institute at Xiamen University in China, pointed out that China has historic rights to claim the space within the "U-shaped line," the nation’s proposed boundary in the South China Sea, commonly known as the "nine-dash line."

Under general principles of international law, the first possession of a territory and its duration are important factors in determining the ownership of a disputed land. "The first discovery, first utilization, and first management (of the South China Sea) are all Chinese," said Fu. He used historical records from the Song Dynasty (960 —1279 AD) to testify to the nation’s management over the sea area for more than 1,000 years.

Another factor fraying the Pentagon’s nerve, as Tong highlighted in his lecture, is China’s rise as one of the largest naval powers in the world since President Xi Jinping took over the country. Nowadays, China’s navy owns more warships than any other country and the second highest number of aircraft carriers. It is seeking active maritime impact overseas including the successful evacuation of Chinese citizens in Yemen’s civil war.

Given Washington’s preoccupation with domestic political issues and overseas conflicts as well as China’s defensive posture, "the United States is unwilling and unable to engage in a military conflict with China."

Despite its military superiority and strong opposition to U.S. intervention in the South China Sea, Beijing adopts a cautious, defensive, strategic doctrine against the United States. It can be summarized in two keywords: "anti-access" and "area-denial."

"It means China’s strategic posture is not to defeat or compete with the United States," but to make it more costly for the United States to intervene –"we don’t want you to come into our area," Tong explained.

Will the South China Sea tension become a prelude of a real U.S.-China naval war? Tong says, "No." Given Washington’s preoccupation with domestic political issues and overseas conflicts as well as China’s defensive posture, "the United States is unwilling and unable to engage in a military conflict with China," he concluded.

Dongyao Nie is a reporter and graduate student at USC Annenberg Journalism School. Her work primarily covers politics, foreign relations, and social issues in East Asia. She is participating in a foreign affairs reporting class taught by Professor Phil Seib, a collaboration between the Pacific Council and the Annenberg School of Communication and Journalism.