US Businesses at the Forefront of Anti-Corruption Fight 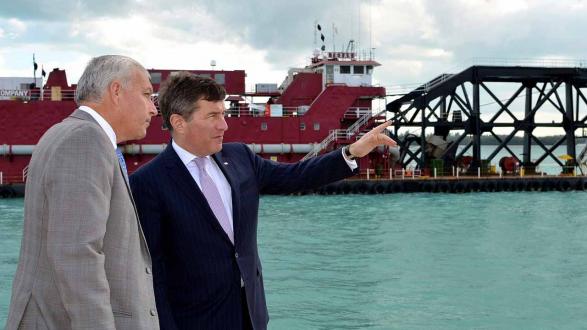 We know all too well the costs of corruption around the world. When officials abuse the public's trust for private gain, they choke off competition and innovation, and stifle economic growth and sustainable development.

As President Obama recently said, "corruption holds back every aspect of economic and civil life. It's an anchor that weighs you down and prevents you from achieving what you could."

Today, on International Anti-Corruption Day, we recognize all those who fight corruption daily and help lift up economies weighed down by graft. The United States government takes this fight seriously, and is working to broaden the range of countries that partner with us to actively combat bribery and corruption.

But while it is chiefly the duty of governments to stamp out corruption, they cannot win the fight alone. International organizations, civil society, and the private sector all play key roles in rooting out corruption in all its forms.

U.S. businesses, in particular, have an enormous opportunity to lead these efforts, using their position, influence, and the weight of the American brand, to advocate for a culture of integrity. Since 1977, American companies have worked hard to comply with the Foreign Corrupt Practices Act (FCPA), often learning from their own and competitor companies' mistakes. Many U.S. firms have gone above and beyond their FCPA obligations, and have helped transform the way businesses operate overseas for the better.

International organizations, civil society, and the private sector all play key roles in rooting out corruption in all its forms.

Raytheon, for example, was recognized last year by Transparency International-USA for its leadership in preventing corruption. The company has formed an anti-corruption team, published an anti-corruption policy in 15 languages, and helped draft the Global Principles of Business Ethics for the Aerospace and Defense Industry, among other efforts.

Just last week, TI-USA gave its 2015 award to PepsiCo, one of the world's largest food and beverage companies, for setting a strong example in anti-corruption compliance. Through measures like training programs for employees and suppliers, the company is making an impact in more than 200 countries and territories where it operates.

By setting high-quality standards, American firms have also strengthened the U.S. government's credibility and ability to urge other countries to crack down on corruption.

It is imperative that our businesses continue to lead in developing coalitions, exchanging best practices, setting standards, improving transparency, and articulating the adverse impacts that corruption poses to all. As more and more companies operating overseas refuse to pay bribes and take part in corrupt practices, they send a powerful signal that cultures of corruption will not be rewarded or tolerated.

By setting high-quality standards, American firms have also strengthened the U.S. government's credibility and ability to urge other countries to crack down on corruption. This helps level the global playing field for law-abiding businesses. Through diplomatic engagement, we are working to ensure other countries adopt tough laws against foreign bribery and prosecute their own companies, most prominently through the Anti-Bribery Convention and the OECD Working Group on Bribery. The United States also helps tackle global corruption through robust assistance programs and the Kleptocracy Asset Recovery Initiative, which seeks to recover the proceeds of foreign corruption to benefit the people harmed by the abuse of public office.

Today, let us applaud our companies' leadership, and encourage them to redouble their efforts in modeling the high standards we have come to expect from them. The U.S. government, in turn, is committed to helping other countries step up their own efforts so that honest businesses will have a fair chance to compete - and prosper - wherever the anchor of corruption is weighing them down.