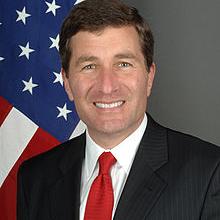 Charles H. Rivkin is CEO of the Motion Picture Association of America. Prior to this appointment, Rivkin served as Assistant Secretary of State for Economic and Business Affairs. Rivkin led the U.S. State Department bureau responsible for managing trade negotiations, investment treaties, business and commercial affairs, economic sanctions, transportation affairs, telecommunications policy, international finance and development related issues, as well as intellectual property rights protection. In addition, Rivkin provided guidance to the Department’s 1,600 economic officers around the world and to the U.S. Mission to the Organization for Economic Cooperation and Development (OECD). Prior to his appointment, Rivkin served for more than four years as the U.S. Ambassador to France and Monaco, leading America’s oldest and one of its largest diplomatic missions, which contains six constituent posts throughout France and represents over 50 U.S. government agencies. Rivkin’s confirmation marks the first time a U.S. ambassador and former CEO has ever led the Bureau of Economic and Business Affairs.

Previously, Ambassador Rivkin worked in the media sector for over 20 years where he served as President and CEO of award-winning entertainment companies such as The Jim Henson Company and Wildbrain. Rivkin helped engineer the sale of The Jim Henson Company in 2000 for nearly $1 billion, and in 2009, he was named one of the 100 Most Creative People in Business by Fast Company.

US Businesses at the Forefront of Anti-Corruption Fight