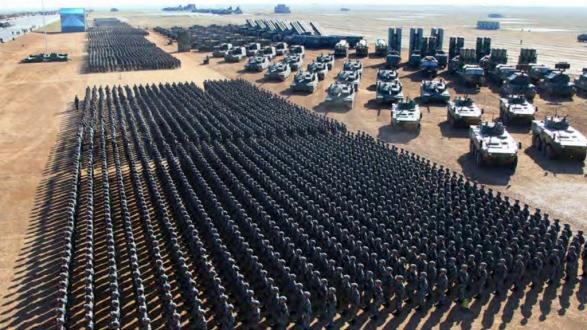 The following is Patricia Kim’s prepared statement delivered to the House Permanent Select Committee on Intelligence of the U.S. House of Representatives during its hearing on "China's Worldwide Military Expansion" on May 17, 2018.

China’s Intention to Become a Great Power by 2049

Since assuming power in 2012, President Xi Jinping has clearly articulated his vision of the “Chinese dream” which seeks to achieve the “great rejuvenation of the Chinese nation.” Xi has vowed to “restore” China’s historical influence and status by transforming China into a moderately prosperous state by 2020 and a rich, strong, and fully-developed great power by 2049. A major component of the Chinese dream includes the strengthening and expansion of China’s military capabilities. Beijing has specifically tasked the People’s Liberation Army (PLA) to complete military reform and modernization by 2035 and to become a world-class military by 2050.

In order to achieve these ambitious goals, the Chinese government has undertaken significant measures both at home and abroad.

Increasing the China Communist Party’s control over the PLA

According to Beijing, the Chinese dream can only be achieved with the Chinese Communist Party (CCP) firmly in control and a PLA that is absolutely loyal to the party. Xi has moved swiftly since coming into power, “cleaning up” both the party and the military and to consolidate his personal power through an extensive anti-corruption campaign. This campaign has targeted all levels, from local bureaucrats to high- ranking leaders and military officials, and has strengthened the CCP’s (and Xi’s) oversight of the PLA. Xi has also ordered extensive organizational restructuring of the military to streamline control and increase his grip over the PLA as chairman of the Central Military Commission.

Under Xi’s rule, the PLA has undertaken several reforms to modernize and strengthen its warfighting capabilities. Some of these measures include increasing the size of the navy and air force while reducing ground troops by 300,000; the creation of five theater commands to boost joint operations capabilities; and the establishment of a Strategic Support Force that focuses on space, cyber, and electronic warfare. The PLA has also been tasked by the Party to accelerate the development of military intelligence, with a focus on emerging technologies and especially artificial intelligence as critical tools for modern warfare. The Chinese government has also called on commercial and defense industries to work together to strengthen China’s military. This drive for “civil-military fusion” fits squarely into Beijing’s larger strategy, as mapped out in its Made in China 2025 initiative to transform China into a self-sufficient technological powerhouse.

Expansion of the PLA’s Global Reach

To date, China has primarily relied on its economic power to cultivate influence in its immediate neighborhood and beyond. Under the banner of the Belt and Road Initiative (BRI), Beijing has pledged to invest more than $1 trillion in infrastructure investment across 60 plus countries. Given China’s growing interests abroad, the PLA Navy (PLAN) has begun developing capabilities to operate in the far seas. It opened its first overseas military base in Djibouti near a Chinese-operated port in 2017 and has demonstrated both the will and ability to protect Chinese interests and citizens in foreign countries, as evidenced by the noncombatant evacuation operations it carried out in Libya and Yemen in recent years. In addition, many of China’s infrastructure investments seem to be driven in part by strategic concerns, with an eye on expanding the reach of China’s military abroad. For instance, Chinese analysts have called for investing in commercial ports in order to use these sites first for civilian purposes and then as strategic support points for the PLAN.

In addition to expanding its military in support of, or through commercial activities, Beijing has also directly increased its military presence in the East and South China Seas. In the East China Sea, Beijing regularly uses maritime law enforcement ships and aircraft to assert its sovereignty claims over the Senkaku (Diaoyu) Islands which are claimed by both Japan and China. In the South China Sea, Beijing has steadily engaged in land reclamation and the construction of military outposts in the Spratly Islands. According to recent reports, China has now installed anti-ship missiles, surface-to-air missile systems, and military jamming equipment on a few of the disputed features. Given the increasing militarization of these territories, U.S. Navy Admiral Philip Davidson writes that “China is now capable of controlling the South China Sea in all scenarios short of war with the United States.”

Challenges to China’s Quest to Become a Great Power

Despite the concerted internal and external efforts to expand its military capabilities, significant challenges still stand in the way of China’s efforts to become a great power. First, China faces major internal challenges—from the need to engage in structural economic reform to address its growing debt problem and the glut of inefficient state-owned enterprises, to the potential for ethnic unrest in Tibet and Xinjiang. Despite the CCP’s firm grip over power at home, disgruntlement over issues such as economic inequality and air pollution are pervasive at the grassroots level and could potentially lead to instability in China’s domestic political arena. While the CCP clearly understands these challenges exist and has set out various measures to tackle them, many of these issues will not be easily resolved and may distract or slow down Beijing’s efforts to transform China into a world-class military power.

In addition to these internal challenges, China also faces severe limitations in terms of its hard and soft power abroad, especially compared to the United States. Other than a treaty of “mutual aid and cooperation” with North Korea, China has no formal allies and just one overseas military base. In contrast, the United States has dozens of allies, collective defense arrangements, and security partnerships throughout the world. According to one unofficial estimate, the United States has approximately 800 military bases in more than 70 countries and territories abroad, and nearly 70,000 troops based in East Asia alone.

Furthermore, despite general acknowledgement of China’s economic prowess, many countries remain wary of China’s intentions, especially in its immediate neighborhood. Polls have found low confidence among many non-Chinese respondents that Xi will “do the right thing” in world affairs, and liberal democracies are especially critical of China’s authoritarian system and the lack of respect for the personal freedoms of its own people.

Finally, while many countries have welcomed the prospect of Chinese economic investment, fears of Chinese overreach and exploitation have sparked grassroots protests and the abrogation of various agreements. For instance, several BRI projects in Myanmar, Nepal, and Pakistan have been suspended or canceled in recent years in light of public pressure and complaints of Chinese “colonization.” These cases demonstrate that even states with relatively close ties to Beijing and a genuine desire for economic aid will not necessarily accept Chinese strategic investment in the face of domestic resistance and sovereignty concerns.

China’s push to modernize its military and extend its reach abroad is unsurprising and reflects the natural tendency of rising powers to increasingly exert influence beyond their borders. Rather than attempting to completely block China’s military expansion, the United States should work with its allies and partners to shape the environment around China to disincentivize destabilizing behavior and to encourage Beijing to use its newfound power in constructive ways. To do this, Washington must speak from a position of strength so that Beijing understands any military conflict or attempts to restrict the United States’ maneuverability in the East Asian region will come at a great cost and set it back in its many ambitions at home and abroad. At the same time, U.S. leaders should also reassure their Chinese counterparts that the United States does not seek to contain China or prevent its rise, and that the two countries have more to gain by steadily working through bilateral issues and cooperating to address common global threats.

When responding to China’s growing military power, the United States should focus on its comparative advantages by:

Patricia Kim is a Senior Policy Analyst of China at the United States Institute of Peace. She will be participating on the “China's Military: Peer or Paper Dragon?” panel at PolicyWest.