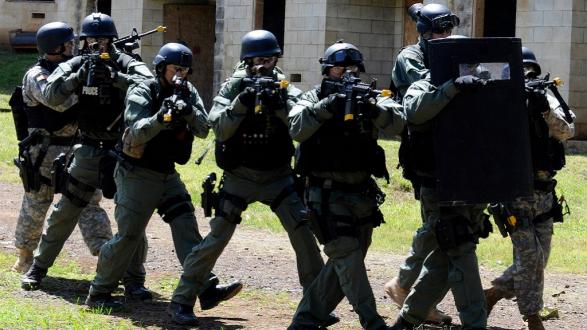 “Don’t underestimate the impact that being held for just two days can have on somebody,” Rachel Briggs, founding executive director of Hostage US, informed Pacific Council members. “To have your life on the line for that period of time is extraordinary.”

Briggs, who as head of Hostage US provides support and guidance for hostages, former hostages, and their families, was joined by board member Michael Scott Moore, who spoke to his experience being held captive by Somali pirates.

The discussion focused on the multifaceted and often unknown impact of hostage situations and negotiations around the world. Not only do hostages often face harrowing challenges as well as emotional and physical distress, but their families must also face day-to-day life without their loved one.

“Don’t underestimate the impact that being held for just two days can have on somebody. To have your life on the line for that period of time is extraordinary.”

For the families of the estimated 200 American hostages taken each year, Briggs explained, accessing finances in their loved one’s name, finding passwords for social media accounts, and liaising with the IRS about unpaid taxes may bring even more complexity to an already difficult situation. Briggs told of one family member’s experience repeatedly attempting to explain their fraught situation to the IRS over a period of more than two years.

This compelled Briggs to found Hostage UK before establishing Hostage US, based in Washington, D.C., in order to better serve her American cases. Since establishing the organization in the United States, she has been “truly overwhelmed at the generosity of Americans,” she told attendees.

This support allows Hostage US to work with financial advisors, lawyers, and support staff who assist hostages, former hostages, and their families at no cost to the individual or their family. This, Briggs said, includes arranging flights and medical care, providing support and guidance to families, and greeting former hostages at airports upon their return to the United States, among other needs.

Not only do hostages often face harrowing challenges as well as emotional and physical distress, but their families must also face day-to-day life without their loved one.

Following Briggs’ opening remarks, journalist and novelist Michael Scott Moore recounted to attendees his experience being held captive in Somalia for two and a half years. The details Moore shared have been documented in his memoir, The Desert and the Sea: 977 Days Captive on the Somali Pirate Coast, which was published in July 2018.

As a journalist, Moore covered the 2011 trial of 10 men from Somalia accused of piracy and brought before authorities in Hamburg for Spiegel Online. It was Germany’s first piracy trial in 400 years and ultimately resulted in their conviction. With a grant from the Pulitzer Center for Crisis Reporting, Moore traveled to Somalia in 2012 to conduct research for a book about piracy.

Moore’s research led him to the city of Galkayo in Somalia, which he described as a “crossroads” and a “popular town with pirates.” He was abducted by pirates while en route to his hotel after taking a travel partner to the city’s airport.

Moore provided details about this experience and described being stopped on a dusty path by a “technical,” or a Somali “battle wagon,” containing 12 armed men. “This one man stopped our car and aimed that cannon right through the windshield and overpowered my car,” he said. He was then driven by the men for two to three hours into the bush in what he said was a situation marked by “confusion and horror.”

“This one man stopped our car and aimed that cannon right through the windshield and overpowered my car.”

Moore also described his capture through the eyes of his mother, who was in attendance for this discussion. He noted that only five hours after being taken hostage, the FBI went to his mother’s house and briefed her about how to respond to any contact by the hostage takers.

That first call, Moore said, came about a week following his capture. He recounted being forced to make a call to the only number he could recall from memory—that of his mother. A $20 million ransom was demanded, but Moore’s mother, using the FBI’s counsel, responded with an $8,000 counteroffer.

Moore said that negotiations continued over his time in captivity, and that he remembers the surveillance planes and drones that flew over the camp to monitor the hostage situation. While unable to meaningfully communicate with the outside world, he forged relationships with other hostages. Among them were two fishermen from the Seychelles who Moore first met after being taken captive and, after being taken aboard a fishing boat, men from China, Indonesia, Vietnamese, Cambodia, and the Philippines.

“This company of other hostages on the ship was really important…we were all just angry to be hostages.”

Moore stated that these men eventually became good friends through broken English and a common hybrid language created by the hostages. “This company of other hostages on the ship was really important,” he said, “because we could live on one deck and not think about the Somalis who were upstairs guarding us with the guns.” “There was some kind of ‘dis-society’ on the ship…we were all just angry to be hostages.”

Moore did attempt to escape the fishing boat, but was placed in solitary confinement after being recaptured. “That’s when things really started to go badly,” he stated. “Every day was a sort of maddening cauldron of anger and terrible food. You can start to go crazy in a situation like that.” But it was words he overheard from Pope Francis on a radio that altered Moore’s outlook and led him to ultimately forgive the pirates.

“In some sense, you always have the freedom to choose, which in Somalia turned out pretty well.”

Moore left Somali in 2014 after his mother and authorities settled on a $1.6 million exchange in negotiations. He was driven by the pirates to the airport before flying to Mogadishu, Nairobi, and then Berlin to meet his mother. In 2016, he even returned to Nairobi to see other hostages return from captivity.

“I had learned in Somalia to live without hope. I made a conscious decision to live with my single, terrible option,” Moore said. “In retrospect, that’s a very important lesson. In some sense, you always have the freedom to choose, which in Somalia turned out pretty well.”