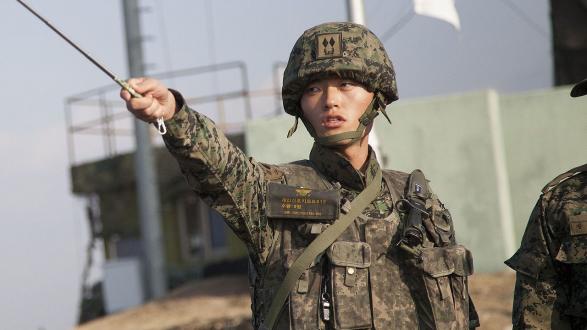 North Korea is looking for trouble. If China decides to help, that would be great. If not, we will solve the problem without them! U.S.A.

I explained to the President of China that a trade deal with the U.S. will be far better for them if they solve the North Korean problem!

In addition, White House Press Secretary Sean Spicer said last week that North Korea was "on notice." In a uniquely puzzling press release earlier this month, Secretary of State Rex Tillerson said that America had already "spoken enough about North Korea." The administration has also made a big deal of diverting a Navy carrier strike group toward Korean waters. Trump called it an "armada."

What is clear from this posturing is that the White House is focused on North Korea, and likely attempting to deter North Korean leader Kim Jong-un from testing a weapon on April 15, the 105th anniversary of the birth of his grandfather, Kim Il-sung. What’s not clear is exactly what U.S. policy toward North Korea is right now. Deterrence is not going to work. Kim Jong-un is extremely likely to call the U.S. bluff. Then what?

As anyone who has studied North Korea for more than an hour knows, it’s the land of terrible options. There are no good, quick solutions to its nuclear program, period, and the challenge has long stumped the best and brightest among U.S. diplomats and strategic thinkers.

There are no good, quick solutions to North Korea's nuclear program, period, and the challenge has long stumped the best and brightest among U.S. diplomats and strategic thinkers.

Let’s examine what the other players may be making of the White House’s rhetoric. The Chinese response to Trump’s tweets is likely a mixture of irritation and confusion. After all, Chinese President Xi Jinping recently spent considerable time with Trump at his Mar-a-Lago estate in Florida. Presumably, Trump conveyed to Xi in clear terms that the United States wants China to place more pressure on North Korea in order to convince Pyongyang that its only option is to reverse its nuclear program. And even though Trump is just learning, thanks to Xi, that the Chinese do not want to take these steps because Beijing is more worried about regime collapse and the ensuing refugee flow than it is about the North’s nuclear weapons (something just about anyone in the Asia divisions of any U.S. national security institution could have told him), the United States and its allies nonetheless need the Chinese to step up. Making public this difficult demand in somewhat threatening terms could make it harder for China to act. At home, Xi cannot be seen to be bending to Trump’s will. He has his own macho calculus to consider.

Moreover, Trump’s linkage of the North Korea issue to a "trade deal" probably puzzles Beijing. What trade deal? There is no bilateral trade deal under negotiation, and it is hard to imagine one that would make sense for both countries. Does he mean the tariffs he has threatened to impose on Chinese goods would not be as high? We don’t know. In addition, the United States has made it a point to keep economic relationships and national security separate. Unlike Beijing, Washington doesn’t dole out economic punishments for trading partners’ political or security slights, because the United States government doesn’t direct industry the way China does and because the United States don’t think this conflation is good for the global economy. China’s leaders may doubt Trump’s ability to deliver anything positive on trade anyway given his campaign rhetoric, even if they do pressure Pyongyang further. They also know Trump’s options are limited, as discussed below, and will thus conclude that he is bluffing. Administrations often learn the hard way: It is not a good idea to back down from a threat made against China.

The Syria strikes are exactly why the North needs nuclear weapons—to protect itself from America’s aggression.

For their part, U.S. allies South Korea and Japan were likely confused by the tweets, as they imply Tokyo and Seoul would not be involved in the planning or execution of whatever it is the United States hopes to do to "solve the North Korea problem." That is troubling, as they obviously have very strong equities and have been involved intimately in the process until now. Hopefully, the consulting that Tillerson has done, and that Vice President Mike Pence will do, is allaying their concerns. Depending on the outcome of the upcoming race for president in South Korea, though, Trump’s tough stance toward the North may not even be welcome any longer.

As for North Korea, it already knows that it has the attention of the Trump administration. The missile strikes on Syria were not likely timed to coincide with the Xi meeting, but Pyongyang may have concluded otherwise. It’s response? The Syria strikes are exactly why the North needs nuclear weapons—to protect itself from America’s aggression.

What Pyongyang, China, and U.S. allies know, what U.S. experts on North Korea in and out of the government know, and what Trump and his White House team hopefully now know, is that the military options for North Korea are much less clear than they were in Syria. First, we cannot be sure that a U.S. air campaign would destroy all of North Korea’s nuclear facilities and weapons, because we do not know where they all are. The North could retaliate using a nuclear weapon or nuclear material if we don’t destroy all of it. But even if our intelligence and aim were perfect, the fact is and has been for decades that Seoul is within artillery range of the North. The casualties from a North Korean retaliation after a strike would be unacceptably high. Any major military campaign on the Korean Peninsula—and almost any would become major quickly—would draw in China and, at the very least, send the global economy reeling. Moreover, as in Iraq, we don’t have an answer to the key question: What comes after the strikes? What are the thousands of intervening steps that lead from a military strike to a peaceful, democratic, unified Korea? An expensive, destabilizing land war in Asia is not what Trump voters signed up for.

Hopefully what Trump has up his sleeve is a plan to impose secondary sanctions on Chinese companies that do business with North Korea in violation of U.N. Security Council resolutions, if Beijing itself refuses to stop these companies itself. But unfortunately, such measures are unlikely to solve the problem quickly or completely.

Which brings us to the American audience for this posturing against North Korea. Americans are now waiting for Trump to do something. He has said he will take care of this problem if China doesn’t act and is building up expectations in a way that reduces his room to maneuver.

The time for tweeting is over. The time for war on the Korean Peninsula is never. The best option is a combination of further sanctions and intense, boring, frustrating diplomacy. Better get to consulting, and hiring, some real talent at State and Treasury.
____________________

Nina Hachigian is a Pacific Council member and the former U.S. Ambassador to the Association of Southeast Asian Nations (ASEAN).