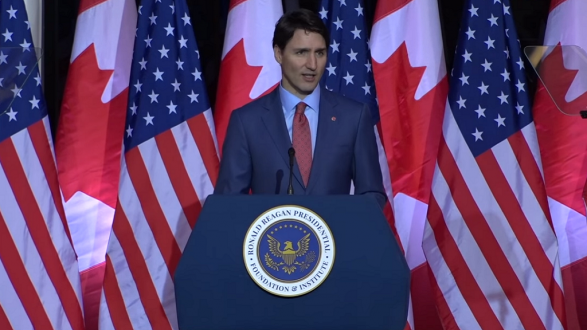 Watch the full speech below:

"America has no better friend, ally, or partner than Canada," Trudeau told the audience, which included Pacific Council members. "We have the longest, most peaceful, and mutually beneficial relationship of any two countries in the history of the world. Simply put, if trade between Canada and the United States is a bad idea, then there are no good ideas. The sum of our trade is essentially balanced. This is and will continue to be ‘win-win.’"

While acknowledging that NAFTA can and should be modernized and updated, Trudeau argued that the free trade agreement has been beneficial for Canada, the United States, and Mexico, and that trade is not a zero sum game. The sixth round of NAFTA negotiations recently concluded in Montreal. The seventh round is scheduled for Mexico City at the end of February.

"With effort, hard work, and a willingness to compromise on all sides, updating NAFTA is eminently achievable," he said, adding that progress has indeed been made, despite some challenging issues facing the negotiations such as disagreements over rules of origin for the auto sector, investor-state dispute settlements, and a regular five-year review of the agreement.

"We need to make sure the benefits of trade are shared more broadly with more people. We must provide more help to people whose livelihoods are disrupted by global economic shifts."

"It’s vitally important that we build on that progress," he said. "It is fundamentally in Canada’s and the United States’ interest that we do so. Trade is not a hockey game. The truth is, both Canada and the United States are winning. And so is Mexico. That’s exactly how we should keep it. When trade is working as it should, all partners win."

That said, he acknowledged that global trade has not helped everyone achieve prosperity.

"Income inequality is growing worldwide, and this is an urgent problem," he said. "A lot of people are doing well, but far too many are not. The status quo of NAFTA and also trade more broadly is not good enough. We need to make sure the benefits of trade are shared more broadly with more people. We must provide more help to people whose livelihoods are disrupted by global economic shifts, including automation and technological change, so they can reestablish themselves in new jobs with brighter futures."

This is an area where he and President Trump agree, despite popular opinion that the two administrations could not see eye-to-eye about anything because of their political differences.

"The truth is we agree about this: too many people have been left behind even as our economies surged," Trudeau said. "I was heartened to hear President Trump talk about the importance of skills training in his State of the Union address. We in Canada are seized with the same problem and have reached a similar conclusion: we cannot allow the technological wave to sweep working families aside. This is something we must address as we modernize and improve NAFTA."

"We can and must work tirelessly to find a pathway to prosperity for us all. This is among the greatest challenges of our time."

Trudeau quoted Ronald Reagan in a speech the former U.S. president gave to Canadian parliament in 1987, highlighting the U.S.-Canadian relationship and promoting the U.S.-Canada Free Trade Agreement: "We look forward to the day when the free flow of trade, from the southern reaches of Tierra del Fuego to the northern reaches of the Arctic Circle, unites the people of the western hemisphere in a bond of mutually beneficial exchange. When all borders become what the U.S.-Canada border so long has been: a meeting place, rather than a dividing line."

He argued that both governments can and must do more to help the people who have been left behind by global trade.

"President Reagan most famously declared, ‘It is morning in America.’ A generation later, it can be morning in North America. But that is up to us."

Trudeau expressed confidence in the U.S.-Canada relationship, both historically and looking ahead to the future.

"The United States and Canada have stood shoulder to shoulder through thick and thin," he said. "Let’s not raise fresh barriers between our peoples. The nexus point for this all is NAFTA. Our task, surely, is to take what our parents’ generation built and transform it into a trade agreement fit for the 21st century. We in Canada, for our part, will devote every necessary effort, for as long as it takes, in a spirit of fairness and mutual compromise, to achieve this goal. President Reagan most famously declared, ‘It is morning in America.’ A generation later, it can be morning in North America. But that is up to us."