Trade and Territory: An Explosive Combination in East Asia 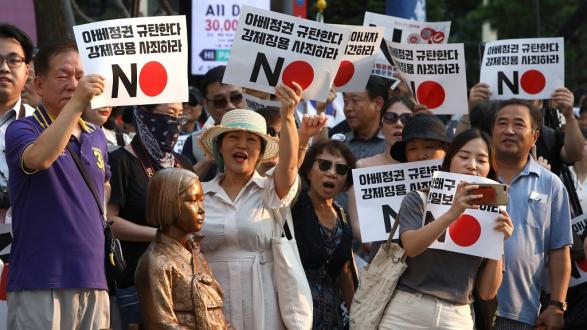 The recent escalation in tension between Japan and South Korea has created an explosive situation. Both sides must do all they can to defuse tension, and the global community—including the United States, China, and Russia—needs to be part of the solution.

Because semiconductor and display industries are at the very heart of South Korea’s economy and export earnings, Japan’s imposition of an export restraint on three chemicals indispensable to these industries amounts to a stab in the very heart of South Korea. In comparison, the recent ruling by South Korea’s courts that ordered seizure of Mitsubishi Heavy Industries’ assets in South Korea is a slap on the wrist of Japan. The damage to Japan is limited to Mitsubishi’s assets in South Korea and is not an all-out assault on Mitsubishi or the Japanese economy. Japan’s response to the court ruling is therefore way out of proportion and constitutes an unnecessarily dangerous escalation of tension.

Japan’s action is without precedent in the history of Japan-South Korean relations since the two countries normalized diplomatic relations in 1965. Although there have been spats between the two neighbors, Japan had never before attempted to overtly inflict a crippling blow to South Korea’s economy. Japan’s action has created an atmosphere of a grave national crisis in South Korea, and many South Koreans see it as Japan crossing a red line, an effective declaration of war. Already, over 60 percent of South Koreans have taken part in a boycott of Japanese goods and many have canceled trips to Japan.

Both Seoul and Tokyo must calm down nationalistic fervor among their populace and do all they can to settle their differences via negotiation and, if necessary, mediation.

What makes this situation explosive is that, given the legacy of Japanese colonial rule over Korea, no Korean politician can afford to be seen as weak vis-à-vis Japan, and nothing whips up Korean nationalism more than Japan’s affront to Korea’s sovereignty. In this charged political context, the latest incursion into Korean airspace by a Russian warplane and the responses by South Korea and Japan illustrate the perils of an “incident” escalating out of control.

With nationalism forcing a hardline response in Seoul and Tokyo and the hot summer temperatures stoking passions, tempers may flare, leading to a war neither side wanted. And if there were a war, North Korea would likely get involved.

The global community, including those nations that are to be impacted by the supply chain disruptions caused by Japan’s export restraint, should encourage Japan to settle its differences with South Korea via means other than enforcing the export restraint.

To prevent incidents from escalating into a war, both Seoul and Tokyo must calm down nationalistic fervor among their populace and do all they can to settle their differences via negotiation and, if necessary, mediation. A face-saving formula for both sides can be worked out through official or behind-the-scenes talks. The United States must wake up to the gravity of the situation and exert all leverage it has on Seoul and Tokyo to bring the two sides to an agreement. China and Russia must realize the dangers inherent in their air patrols in the waters between Korea and Japan and prevent any future incursion into the airspace around Dokdo.

Jongsoo Lee is a Pacific Council member, senior managing director at the Brock Group, and Center Associate at Davis Center for Russian and Eurasian Studies at Harvard University.

This article was originally published by the Korea Herald.