The Syrian War: A Never-Ending Nightmare for Civilians 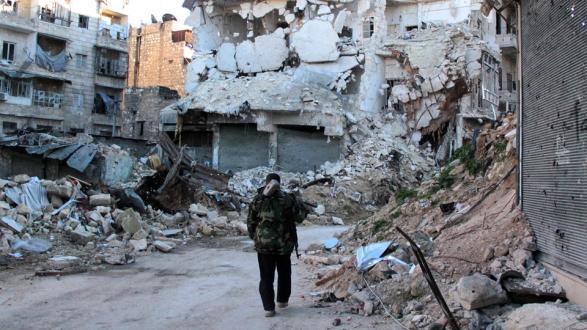 The horrors of the Syrian war are unending. If anything, they are mercilessly ramping up, as civilians continue to be wiped out, in blatant contravention of international law. In October, the Turkish offensive into Kurdish controlled northeast Syria made headlines, in large part for the Trump administration’s role in countenancing ethnic cleansing—the forced removal of an ethnic or religious group by violent means.

Despite several unsuccessful congressional efforts to stop the Turkish incursion and the premature and reckless pullout of U.S. troops, the world quickly turned its focus away from Syria, even as atrocities continue to be unleashed upon civilians at an alarming rate.

Now is not the time to look away from Syria. Idlib Province, the last rebel-controlled bastion inside Syria, remains the epicenter of escalating violence. Each week brings new reports of civilian deaths from Russian aerial bombardments of populated areas and civilian infrastructure, including hospitals, markets, and schools. An unrelenting campaign of shelling, aerial bombing, and ground offensives by Syria and its allies, especially Russia, has resulted in massive displacement and a catastrophic humanitarian situation that is only getting worse.

A never-ending nightmare for civilians

Violence in northwest Syria has escalated dramatically in recent weeks, with reports of civilian casualties streaming in on a regular basis. On January 21, a Russia-led air raid killed 40 people, including at least eight children. This came on the heels of an attack just last week, in which at least 21 civilians were slaughtered in the bombing of a busy market, just days after a similarly brutal airstrike attack and an attack on a school using illegal cluster munitions on New Year’s Day. Reports such as these have been flooding in for weeks, despite a new ceasefire agreement between Russia and Turkey.

According to the United Nations Office for the Coordination of Humanitarian Affairs (UNOCHA), nearly 350,000 people have fled their homes in Idlib Province since December 1, mainly heading north from southern Idlib, which has borne the brunt of the air attacks. An estimated 80 percent of those fleeing are women and children, including many already displaced by the conflict.

Syrian President Bashar al-Assad has stepped up attacks on this remaining rebel linchpin, in disregard for the 3 million civilians who live in the area. Nearly half of Idlib’s civilians have been displaced, some multiple times, and their number grows each day. Trapped between a fierce assault and a closed Turkish border, with Turkey refusing to take any more refugees, civilians are huddling in makeshift settlements and in open fields.

Meeting the needs of these war-beleaguered civilians is overwhelming, particularly with the added challenges of overcrowded camps and brutal winter weather conditions.

Civilians have been ruthlessly targeted throughout the protracted Syrian conflict, primarily via Russian air shelling in support of Assad’s army. Civilian infrastructure has been repeatedly and strategically bombed throughout the eight-year conflict, in contravention of international humanitarian law. Human Rights Watch reports that nearly 50 hospitals were destroyed in 2019 alone, with Russia and Syria targeting hospitals “using coordinates these facilities had shared with Russia through a United Nations deconfliction mechanism.”

The UN created a no-strike list to provide warring parties with the precise locations of humanitarian sites that under international law are exempt from attack. However, the UN’s sharing of this information to save hospitals and other protected spaces backfired, allowing Russia and Syria to hone in on and decimate those sites with impunity. Under international law, intentionally or recklessly bombing hospitals or other civilian infrastructure is a war crime.

The UN reports that civilians are also being killed while on the move, in violation of international law. On December 24, an airstrike reportedly impacted an area where displaced people had gathered near Jawbas village, killing at least 12 people, including four children. Ground fighting is also impacting civilians, with reports of shelling in northwest Hama injuring civilians and severely damaging residential areas.

Meeting the needs of these war-beleaguered civilians is overwhelming, particularly with the added challenges of overcrowded camps and brutal winter weather conditions. Humanitarian response has been strained to the limits of its capacity. Moreover, many relief workers have had to flee for safety, and many humanitarian buildings have been reduced to rubble, including schools for displaced children, medical clinics, and centers once serving as safe spaces for women and girls.

Despite this dire situation, the international community has been largely unresponsive and ineffective in stopping civilian atrocities.

Despite this dire situation, the international community has been largely unresponsive and ineffective in stopping civilian atrocities. At a time when aid should be at its highest level, the UN Security Council just voted to scale back assistance to millions of acutely vulnerable people in Syria. In 2018, Security Council Resolution 2449 had created a cross-border mechanism allowing the UN and partners to deliver aid using border crossing not under control of the Syrian government, acknowledging that aid could not be delivered from within Syria.

Since its establishment by the resolution, the cross-border mechanism allowed more than 4 million people to receive life-saving assistance. On January 10, the Security Council renewed this resolution, but limited its scope significantly—an inexcusable move in this time of dire need when hundreds of thousands of Syrian civilians are displaced and attacks on civilian infrastructure persist.

The vote also closed the cross-border lifeline used by the UN in northeast Syria, a region still reeling from the Turkish offensive begun in October that caused massive displacement. The UN estimates that up to 1.4 million civilians may be affected, and that 50 percent of health facilities in northeast Syria could close within three months.

Syria and Russia have continued to perpetrate atrocities with impunity, in blatant defiance of humanitarian law and international scrutiny. However, there are positive signs that accountability efforts currently underway may someday undercut this unbridled assault on human life. For one thing, the UN General Assembly has moved to fully fund investigations into mass atrocities in Syria, notwithstanding Russia’s efforts to block the financing.

Also, despite a very disjointed Syria policy, President Trump has signed into law the Caesar Syria Civilian Protection Act, as an amendment to the $1.4 trillion National Defense Authorization Act. The legislation, which Jewish World Watch has strongly advocated, slaps new sanctions on Syrian leaders and commits the United States to support international prosecution of those accused of human rights atrocities during the conflict. It will also penalize private companies or governments that do business with the Syrian government, including Russia and Iran, which have been major backers of Assad’s merciless campaign against his own people.

Those responsible for ongoing violations of international humanitarian law in both northwestern and northeastern Syria must be held to account for their crimes.

While the passage of the Caesar Act is a positive step, it will have little effect unless Washington finally develops a clear policy towards Syria. It must lead the international community in a concerted effort to protect civilians, guarantee freedom of movement, and allow unhindered access by all humanitarian parties to provide life-saving assistance to those in need. The recent ceasefire should be upheld and the demilitarized zone reinstated.

Finally, those responsible for ongoing violations of international humanitarian law in both northwestern and northeastern Syria must be held to account for their crimes. The protracted conflict, as well as the uncertain fate of the northeastern territory, will only set the stage for the resurgence of the Islamic State—something Washington should work to avoid at all cost.

How you can help

No current legislation captures the urgency of pushing for a more engaged Syria policy and stepping up to meet the dire needs of the civilian population, especially in northwest Syria, but also in the northeastern territory. However, you can write to your representatives and senators demanding that they keep Syria top of mind. Please join Jewish World Watch (JWW) in calling for a more robust U.S. policy that maintains America’s commitment to protecting human life and dignity, while also acknowledging the huge security risks of disengaging from the Syrian conflict.

You can also help the Syrian people by supporting JWW’s project in Idlib Province, the epicenter of the recent attacks on civilians. Over the past three years, JWW has been helping to ship medical supply containers directly into the hardest-hit areas of Syria, focusing now specifically on Idlib, placing life-saving supplies directly into the hands of doctors continuing to save lives in heavily bombarded areas that traditional aid mechanisms cannot reach.