Shifting The Correlation Of Forces In Ukraine 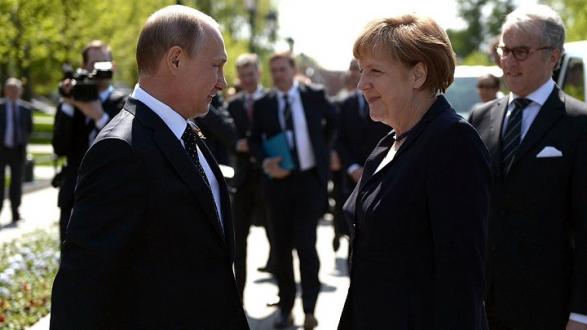 Two months have passed since Russia annexed the Crimean Peninsula, and almost as long since pro-Russian separatists began clamoring for the same thing to happen in eastern Ukraine. Authorities in Moscow, however, no longer seem in any hurry to satisfy the demands of this rag-tag army. Why this sudden change in outlook? The answer has little to do with US sanctions. It has instead to do with some rather deft European diplomacy—with a leading role played by Germany—that has helped level the playing field in the battle for Ukraine. The question is whether this new phase of the contest will prove lasting or transitory.

In order to understand what has happened, consider first the foreign policy style of Russian president Vladimir Putin. Putin has strategic objectives, but he is not tied to any particular strategy; he is too clever to be bound to a particular game plan. Putin probes for weakness, seizes opportunities, and responds to incentives; and two weeks ago European leaders altered those incentives decisively.

The key was Germany. Germany is the top European customer for Russian energy exports; Berlin has also been one of the Kremlin’s most sympathetic advocates in the councils of the European Union. But Russia’s behavior in the Ukrainian crisis has deeply offended German chancellor Angela Merkel, who takes an understandably dim view of recreating the Soviet sphere of influence.

Putin probes for weakness, seizes opportunities, and responds to incentives; and two weeks ago European leaders altered those incentives decisively.

She has repeatedly signaled a tough line with Moscow—tougher in fact than any German chancellor in the past forty years. And on May 2 she issued a threat that Putin quickly judged to be both dangerous and credible.

Hillary Rodham Clinton During a joint press conference with US president Barack Obama, Merkel signaled a new red line in Europe Union’s dealings with the Moscow. No longer would the EU require a large-scale Russian military intervention to trigger more biting European sanctions: instead, Russia would be held responsible if Ukraine was unable to conduct its presidential elections, scheduled for May 25, on a national scale. Merkel’s statement was later echoed by the EU’s foreign policy chief, Catherine Ashton, as well as by representatives of various other European governments. Perhaps more importantly, the chancellor’s formula was endorsed—publicly if somewhat reluctantly—by leaders of German industry.

It did not take long for Putin to respond. Within hours he expressed grudging support for the Ukrainian presidential poll, called for a postponement of the independence referendums scheduled by separatist leaders in Donetsk and Luhansk, suggested that the 40,000 Russian troops on alert near the Ukrainian border would return to their barracks, and endorsed a role for the Organization for Security and Cooperation in Europe in mediating a solution to the Ukrainian crisis. Each of these actions was in direct response to key demands being pushed hard by German negotiators in private bilateral meetings.

What will come of all this remains uncertain. There is no evidence as yet that Russian forces have actually left the border area, and the Donetsk and Luhansk polls went ahead despite Putin’s public recommendation that they be delayed. Whether this represented an affront to the Russian president or had his private blessing remains to be seen. It may be that Putin wishes merely to plausibly deny Russian culpability in the event the May 25 poll is a failure.

But even if the election is judged a success, there is a substantial problem with the new European policy stance: it is self-liquidating. Once the May 25 election is over, the initiative will shift back to Mr. Putin. Judging by his history, he will not hesitate to exercise it.

To avoid this outcome, both the US and EU should adopt a new marker—now, before the May 25 poll—that will guide their decisions about further sanctions. The gas price negotiations between Kiev and Moscow present such an opportunity.

Following former president Yanukovych’s flight from power, Moscow all but doubled the price of natural gas scheduled for delivery to Ukraine. Soon after that Gazprom insisted that Kiev pay off its outstanding energy balances and make all future payments in advance of delivery.

Once the May 25 election is over, the initiative will shift back to Mr. Putin. Judging by his history, he will not hesitate to exercise it.

Taken together, these demands amount to economic coercion—a clear violation of solemn commitments that Russia undertook in 1994 when became a co-signatory to the Budapest Memorandum guaranteeing Ukraine its sovereignty.

More recently Putin has suggested that the price of gas delivered to Ukraine is negotiable. Let’s hold him to his word. It is time that the member states of the European Union, together with the United States, insist that neither the sword nor the purse of the Russian Federation be used to undermine the sovereignty of its neighbors.