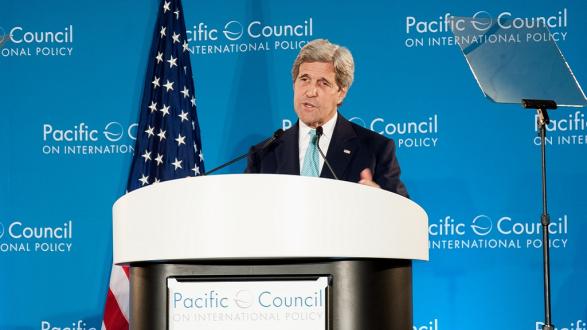 The Trans-Pacific Partnership (TPP) and the Transatlantic Trade and Investment Partnership (TTIP) are integral to the international interests of the United States, Secretary of State John Kerry said in an address to the Pacific Council on April 12 in downtown Los Angeles.

“Without a doubt, these trade agreements are at the center of defending our strategic interests, deepening our diplomatic relationships, strengthening our national security, and reinforcing our leadership across the globe,” said Kerry. “And the importance, my friends, cannot be overstated.”

The negotiations on TPP, which would relax trade barriers, were finalized in October 2015 and signed in February 2016 by Australia, Brunei, Canada, Chile, Japan, Malaysia, Mexico, New Zealand, Peru, Singapore, the United States, and Vietnam. The agreement requires ratification by Congress, where it faces stiff bipartisan opposition. TTIP, on the other hand, is a free trade and investment agreement between the United States and European Union that is still under negotiation.

“As times change, our relationship has to adapt to new challenges and to new opportunities,” said Kerry. “TTIP will do this by implementing commonsense reforms to remove tariffs, eliminate red tape for goods that cross borders, and promote services enabled by the internet – all the while upholding consumer, environmental, and labor protections consistent with our shared values. And contrary to some of the mythology that gets out there… nothing in TTIP lowers standards or voids regulations."

“Make no mistake: this is not your parents’ or your grandparents’ trade agreement."

"It raises standards. It adheres to people’s previous regulation. And it, in fact, improves life and opens job opportunities on both sides of the Atlantic.”

Kerry explained how the TPP is also central to America’s future prosperity and security in the Pacific region.

“Make no mistake: this is not your parents’ or your grandparents’ trade agreement,” he said. “TPP is the highest-standard trade deal ever reached, period. It improves governance by setting high standards on transparency, corruption, and government accountability.”

The Secretary of State also linked the security benefits of the agreement to the Golden State: “[TPP] establishes strong, balanced rules to protect intellectual property and the 40 million Americans working in creative and digital industries, which… is a huge issue for California film studios and for Silicon Valley.” 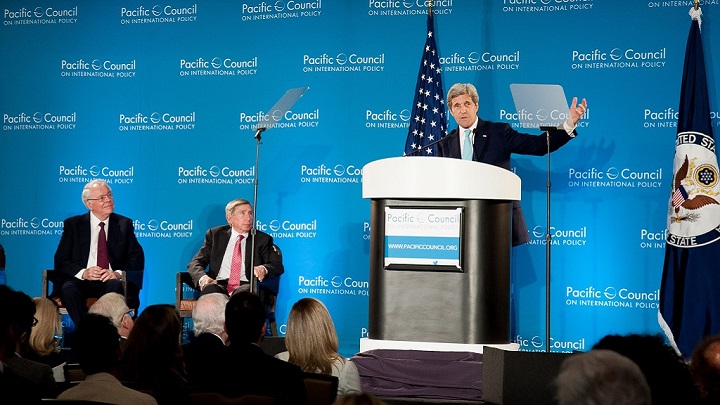 Kerry concluded by pointing out that the debate about these trade agreements comes down to a fundamental question: “Will we bind our nation closer to partners and allies in the Asia-Pacific and Europe, and strengthen our existing and emerging relationships in key markets and regions? Or will we pull back from our role as the indispensable global leader and leave others to fill the void, and delude ourselves into somehow believing that will make us safer? My own belief is that, when the stakes are this high, Americans will decide to lead. That’s who we are.”

The address was covered by several major media outlets, including the Washington Post, the Los Angeles Times, CNN, and more. Carol Morello and David Nakamura of the Washington Post wrote that “Kerry’s remarks were directed as much at Congress as at the civic leaders and academic leaders who came to hear him speak at a downtown Los Angeles hotel on his way home from meetings in Japan.” Ann Simmons of the Los Angeles Times highlighted Kerry’s argument that the TPP is vital to Hollywood and Silicon Valley on the West Coast. Elise Labott of CNN reported that Kerry “lashed out at politicians,” including both Republican and Democratic presidential candidates, “whom he accused of exploiting the ‘sense of anxiety’ about the deals as well as the ‘legitimate anger’ of those hurting in the current economy.”

On the changing international landscape:

Since the fall of the Berlin Wall, said Kerry, “we’ve seen the old East-West, North-South divisions lose relevance as economic might has shifted towards the Pacific and some communist or former communist countries have recently developed a surprising appetite for capitalism.” And while new middle classes have been created in formerly developing countries such as China, India, Brazil, and Mexico, periodic financial shocks have highlighted the growing divide between rich and poor in the world.”

Add to that the growing and complex conflicts in the Middle East, and it has become clear that “the globe is in constant motion far beyond anything that many of us grew up with in the Cold War, in the 20th century, and one storm appears to be overlapping the next in today’s world.”

On ISIL and the conflict in Syria:

Last month marked the fifth anniversary of the war in Syria, which the international community has struggled to resolve. Hundreds of thousands of people have died and millions more have become refugees, expanding the impact of the conflict to countries around the world. Kerry said that the United States and its allies continue to seek a political solution to the conflict, as well as a way to defeat and destroy ISIL.

“In recent weeks, we’ve been able to reduce the violence and increase access to humanitarian aid,” said Kerry. “Our plan is now to push as hard as possible for a transition in governance that can bring peace and eventually be able to enable refugees to return to their homes. At the same time, we have mobilized a 66-member international coalition that is taking the fight directly to the murderous thugs of Daesh, killing its leaders, shrinking its territory, cutting its supply lines, and bombing the revenue sources on which it depends. We will defeat Daesh.”