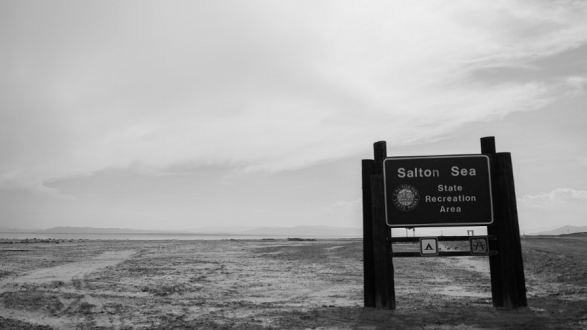 In February, I wrote about Cape Town’s impending aquatic doomsday, Day Zero. My article noted that Cape Town and California had much in common when it came to water management and water scarcity, and I hypothesized that but for a few good winters’ worth of precipitation, California may someday find itself in Cape Town’s shoes. Recent water conservation laws may help, and time will surely tell how much space California can put between itself and water scarcity.

The parallels between California and Cape Town look tenuous in comparison to those between California's Salton Sea and Iran’s Lake Urmia. We are literally in the process of watching these two salt lakes go dry and wreak havoc on the surrounding populations. How did we get here, how are we responding, and most importantly, can we learn something from Iran?

The Salton Sea is synonymous with bygone glory. Once a favorite hangout for celebrities like the Rat Pack, the Salton Sea was formed in 1905 by a burst dam on the Colorado River. For over two years, millions of gallons of fresh water spilled into a shallow depression north of Brawley, eventually forming a lake twice the size of Lake Tahoe. Birds arrived in droves, and the Salton Sea became an important stop on the Pacific Flyway. Since the 1970s, however, the Salton Sea has fallen on hard times.

Estimates are that the Salton Sea will be five times saltier than the Pacific Ocean by 2045, making it uninhabitable for fish, and aggravating a public health and environmental disaster.

I visited in January of this year. The Salton Sea is a strange place, and in some ways it feels like a movie set for a dystopian sci-fi film, something akin to Mad Max. Dead fish carcasses, long desiccated in the desert sun, form a macabre and crunchy carpet. The air was hot, and to say that the Sea was pungent is an understatement. For all its odiferousness, this was mild: in 2012, the Salton Sea emitted so much sulfur dioxide that Los Angeles issued an odor warning from 150 miles away.

Estimates are that the Salton Sea will be five times saltier than the Pacific Ocean by 2045, making it uninhabitable for fish, and aggravating a public health and environmental disaster that already has a strangle hold on victims in the nearby communities of Coachella and Indio. As the Salton Sea dries, it leaves behind a soft, powdery bottom called playa. That playa contains toxic residues from decades of agricultural runoff, as well as fine particles and salt. Up to 100 tons of dust could leave the playa daily as more and more seabed is exposed, and that dust will be picked up by desert winds and find its way into the lungs of people throughout the Imperial Valley, which already has some of the worst air quality in the country. The desiccation of the Salton Sea is therefore not only an environmental disaster, but a source of environmental injustice.

The ecological disaster that is the Salton Sea is only going to intensify. As of January 1, 2018, water transfers have been stopped, which will decrease water inflows by 40 percent. The water that would have entered the Salton Sea will now slake San Diego’s thirst. Some scientists see 2018 as a turning point toward even more negative outcomes.

There are ways to deal with the issue of airborne playa, but they are expensive. Owens Lake, famous for its role in the LA water wars earlier in the 20th century, is currently being treated to prevent the kind of air pollution produced by the Salton Sea. The scheme involves a series of areas or "chambers" that utilize gravel, water, and other approaches to keep the Owens Lake playa moist. Plans for a similar approach to the Salton Sea have been in the works for years, but unfortunately without results.

The effects of Lake Urmia’s shrinkage are devastating, from eye and respiratory problems among nearby residents to a loss of ecological diversity.

Meanwhile, on the other side of the globe in Iran, Lake Urmia is also shrinking. The lake, once a tourist attraction and an important source of water for agriculture, is less than 12 percent of its original size, a measure that surprised scientists. Iran is working with the UN Development Program to try to improve management of the lake. In 2016, Lake Urmia became a national symbol with a social media campaign, "I am Lake Urmia," which focused many Iranian’s on the lake’s plight.

As in the Imperial Valley, the effects of Lake Urmia’s shrinkage are devastating, from eye and respiratory problems among nearby residents to a loss of ecological diversity. The relationship between Lake Urmia and agriculture has morphed—farmers used to worry about saline intrusion from the lake’s slowly seeping waters.  Now, they worry much more about salt storms, which whip up salt-laden dust from the dry lake bed and deposit it on nearby crops.

The similarities between Lake Urmia and the Salton Sea are stunning, and in both cases, there are active discussions about how to manage each lake's shrinkage. There are also meaningful differences. While plans for the Salton Sea exist, they have been stalled repeatedly. In Iran, there is a national dialogue about Lake Urmia, and President Hassan Rouhani pledged $5 billion for lake restoration efforts during his most recent political campaign.

The true test will be making sure the Salton Sea doesn’t take more lives with it by its negative impact on air quality. Perhaps we can find inspiration and ideas from Lake Urmia.

In the case of the Salton Sea, we know that current operations at Owens Lake are expensive, costing $2 billion so far, mostly funded by the city of Los Angeles. Furthermore, if operations cease for two weeks, Owens Lake begins to dry up and send dust into the atmosphere. How truly sustainable is a solution that requires such care, attention, and funding? Does the political will exist to address the Salton Sea in a way that can continue?

There are also questions of scale. In Iran, Lake Urmia is one of many lakes that are drying up. Recent studies indicate that Iran is on the fast track to severe water scarcity, with Tehran at the center. Even if Iran succeeds in addressing the crisis at Lake Urmia, what resources exist for the other lakes that are smaller and less well known, but where desiccation is equally destructive?

Some Iranian-California dialogue has already taken place: in 2016, scientists at UC Irvine hosted a forum on drought and its consequences—including lake desiccation—that included scientists from Iran. Since California is clearly not alone in its struggle to manage the consequences of lake desiccation, more exchange and dialogue will benefit all parties, whether American, Iranian, Chadian, or Bolivian. The list of shrinking lakes goes on. Let's hope the dialogue continues.

Sarah Sieloff is a Pacific Council member and executive director of the Center for Creative Land Recycling.

The views and opinions expressed here are those of the author and do not necessarily reflect the official policy or position of the Pacific Council or her organization.