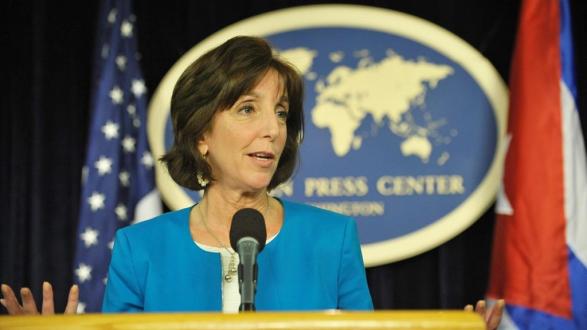 On April 28, following 11 months of congressional gridlock, Roberta Jacobson was confirmed as U.S. Ambassador to Mexico. This is an important moment in the U.S.-Mexico relationship, with issues like trade, immigration, and border security at the top of the agenda.

Jacobson’s confirmation came just one week after the Mexican senate approved Carlos M. Sada as Mexico’s ambassador to the United States. The Pacific Council has a close working partnership with Ambassador Sada. With his help and support, we recently launched our new Mexico Initiative.

Roberta Jacobson is "among the most highly qualified people ever tapped to represent the United States in Mexico." - Michael Camuñez, former U.S. Assistant Secretary of Commerce

Her confirmation has received bipartisan praise. "On issues ranging from trade to migration to security and the border, the interests of the United States are served... when our nation is well-represented in Mexico," said Senator Jeff Flake (R-AZ). "Though long overdue, I’m pleased that the Senate has confirmed an individual as qualified and capable as Roberta Jacobson to serve as U.S. Ambassador to Mexico."

Jacobson’s confirmation vote had been held up in the Senate due to her role in normalizing U.S.-Cuba relations. In order to drop the hold on Jacobson, the White House had to agree to several conditions, including that the State Department train Foreign Service Officers on the value of religious freedom, produce 40 new reports a year on a number of diverse issues, extend sanctions on Venezuelan government officials by another three years, and more.

Former U.S. Assistant Secretary of Commerce Michael C. Camuñez, a Pacific Council director, wrote in an op-ed that Jacobson is "among the most highly qualified people ever tapped to represent the United States in Mexico."

Secretary of State John Kerry also praised Jacobson’s record of service. "We are sending one of our finest diplomats to advance this important relationship," said Secretary of State John Kerry. "No one is more qualified than Roberta to represent the United States in Mexico. I will continue to count on her leadership and sound advice to advance our economic and political relationship with our partner and friend."

Want more on Mexico? Read about the Pacific Council’s Mexico Initiative, which aims to expand programming, strengthen outreach and recruitment efforts, and produce analysis and commentary to inform public discourse regarding the U.S.-Mexico bilateral relationship.

Learn how you can directly contribute to the Pacific Council’s work on U.S.-Mexico relations. Support us now.