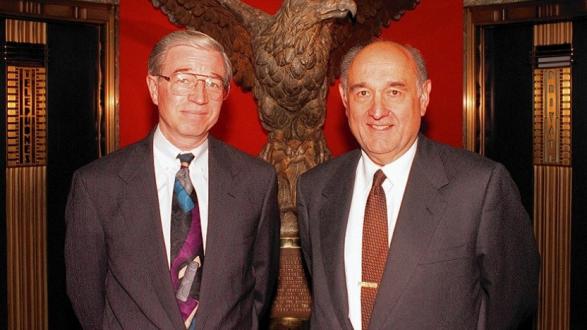 News stories on his death emphasized his business career, primarily as chief executive of the Times Mirror Company during its most expansive and successful years in newspaper and magazine publishing, cable television, lumber, and forest products. Other accounts emphasized his importance as a patron of the arts, particularly as chairman of the Boards of the J. Paul Getty Trust; the Huntington Library, Art Collections and Botanical Gardens; and the National Gallery of Art in Washington.

What was especially remarkable about Bob Erburu, beyond his business acumen and his devotion to the arts, was his pioneering, creative, and indefatigable dedication to his community and civic institution-building. He served simultaneously on the boards of the William and Flora Hewlett Foundation, the Ahmanson Foundation, the Ralph M. Parsons Foundation, and the Fletcher Jones Foundation, and saw these responsibilities as a way to help build a stronger city and state, with an emphasis on education and social inclusion.

He started or nurtured countless civic initiatives, including, for example, the Festival of Books, sponsored by the Los Angeles Times in cooperation with UCLA, and more recently and currently based at USC. He was a major supporter of USC, his alma mater, but also of many other educational institutions in California, and he was an important lay leader of the Archdiocese of Los Angeles.

One of the initiatives to which Bob devoted special enthusiasm, care, intelligence, and wisdom was the Pacific Council on International Policy.

One of the initiatives to which Bob devoted special enthusiasm, care, intelligence, and wisdom was the Pacific Council on International Policy. In 1993, I was beginning to think about whether and how to try to launch a Los Angeles-based leadership forum on international policy issues that are of special importance to the future of California and the whole western region of North America.

Judge Shirley Hufstedler suggested that I meet with Robert Erburu before deciding whether to accept an invitation from Brown University to direct its Watson Institute on International Studies, or to remain in Los Angeles to explore whether such a policy forum could be established.

With her encouragement, I asked for an appointment with Erburu, whom I had never met. Within about three hours, he called personally and told me that he was preparing for a Board of Directors meeting at Times Mirror the following Tuesday, but that he would be glad to meet me. When we met on a Wednesday morning, Bob said that he had long felt that Los Angeles needed such an institution, something similar to the Council on Foreign Relations in New York (of which he was a Board member) but geared to the specific qualities of California and of an era of growing global exchange.

He said that he did not want to affect my personal decision about whether to go to Brown, but that if I eventually opted to stay, he would do what he could to be helpful, within an already very busy life. He encouraged me to talk with USC President Steven Sample about my decision. I had never met Dr. Sample, but I secured an appointment with him and quickly won another powerful ally for the proposed project. I have always wondered whether Bob facilitated that meeting with one of his deft phone calls; I never asked.

Erburu took a consistently strong leadership role. For 10 years, he chaired or co-chaired the Pacific Council’s Board of Directors.

Within the next couple of weeks, after I made my decision to stay in Los Angeles, I met with Bob again. He turned immediately to strategizing and brainstorming about how he could help advance the project. Soon he wrote five of the top corporate leaders in Los Angeles, briefly outlining the proposed organization and the reasons for it, expressing his own interest and that of the Times, and asking for their reactions.

Two or three weeks later Bob informed me with some concern that only John Bryson of Edison had responded enthusiastically to his letter; that two other corporate leaders had expressed modest interest, that one had begged off, and one had not responded. Perhaps, he said, this project is just not going to fly.

I told him that my perspective was quite different. A month before, I had not known of a single major corporate leader who would back the idea of building a new international policy forum to help Southern California build cosmopolitan capacity to respond intelligently to a rapidly changing world. Now we had two enthusiastic and influential corporate backers and two others were at least positively inclined and open to hearing more. Bob liked that response and recounted it several times over the years, sometimes in my presence.

Bob’s next step was to ask me to travel to Menlo Park to consult with Roger Heyns, the president of the Hewlett Foundation (on the board of which Bob sat), and former chancellor of University of California, Berkeley. He suggested that I discuss with Dr. Heyns the feasibility of what we were considering. He advised me not to ask for money at this stage, but just seek his advice.

Erburu frequently opened doors, raised important questions at numerous junctures, always in a supportive way, and was meticulously well-prepared to lead Board meetings and retreats. He was always available, focused, and constructive. He was a wonderful mentor and friend.

After about 50 minutes of good discussion, Dr. Heyns said that our project was quite ambitious, but important; that he thought it was feasible and worth trying; that he believed I had the qualities, experience, and energy to do the job; and that Bob Erburu’s interest and support would be a big asset, but that I should proceed only if I were willing to devote at least 10 years to the effort. Bob had thus managed to get a highly qualified evaluation, important advice about how to proceed, and an implicit commitment by the Hewlett Foundation to provide support, all with one move.

I also met in these early weeks with Jon B. Lovelace, long-time head of the Capital Group and a civic-minded philanthropist. He told me that the project I described was significant and timely, but that I should understand that he was at a stage of life when he was shedding responsibilities and time commitments rather than adding them. We should not expect, therefore, that he would be able to devote much time to participating, but that we could count on his personal support, as well as the company’s, if we went forward. This timely commitment, made good repeatedly over the years, advanced our project significantly.

From then on, Bob took a consistently strong leadership role. He chaired a Steering Committee that in 1994 reviewed the mission concept and feasibility of the proposed institution and considered how it should relate to the Council on Foreign Relations; the Los Angeles World Affairs Council; the region’s universities, research centers, and think tanks; and to the corporate community throughout California and beyond.

Within a year, in April 1995, the Steering Committee incorporated the Pacific Council, approved bylaws, and became its Board of Directors. Six weeks later, in mid-May, we held our inaugural retreat, attended by a remarkable cross-section of business, media, political, civic, and academic leaders, many of them attracted to the event by Bob’s personal invitation and commitment. That Sunday, the Los Angeles Times featured a full-page interview with me about why we were launching the Pacific Council and what we hoped to accomplish.

For the next 10 years, Bob chaired or co-chaired the Pacific Council’s Board of Directors, sharing this role first with John Bryson and later, when he returned to Los Angeles after serving as Secretary of State, with Warren Christopher. He frequently opened doors, raised important questions at numerous junctures, always in a supportive way, and was meticulously well-prepared to lead Board meetings and retreats. He was always available, focused, and constructive. He was a wonderful mentor and friend.

I learned constantly from Bob about the importance of due diligence, good governance, open communication, and preserving “square corners.” I admired his great capacity to make important points softly and subtly, to build consensus, and to be ambitious about aims and goals yet realistic about what was possible at any given stage. He believed strongly in building positive-sum cooperation to achieve shared goals rather than focusing on turf-protection, strongly reinforcing my own inclinations.

I marveled at Bob’s effective way of motivating best efforts from others, including myself.  He once said of me to a third person, again in my presence, “Abe is a risk taker, but he is quite careful about the risks he takes.” I thought then, and now again in remembering him, that he was also describing himself.

American corporate life has changed a great deal in the past decades. It is no doubt much harder now for business leaders, even of Bob Erburu’s caliber, to devote as much time and energy as he did to issues somewhat removed from the company’s bottom line. In this 25th year of the Pacific Council’s history, it is fitting to remember Robert Erburu’s indispensable leadership in establishing and guiding the Pacific Council. Leaders like Bob Erburu were always rare, and we need them now more than ever.

Abraham F. Lowenthal was the founding president and is president emeritus of the Pacific Council on International Policy. He is also the Robert F. Erburu Professor of Ethics, Global Relations and Development, Emeritus, at the University of Southern California.

Learn more about the Pacific Council’s 25th Anniversary and read more in the Founders Series.