The Risky Business of Telling Stories 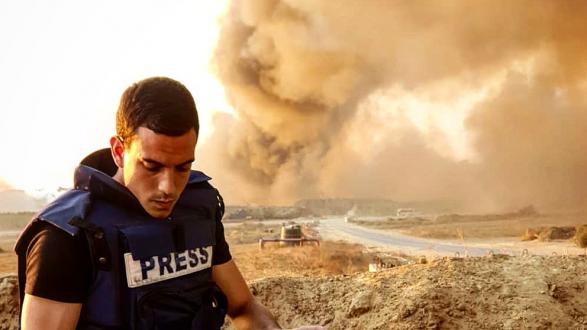 In 2018, 79 journalists and media staff died in work-related incidents, and over 250 journalists were jailed. Many say the risks reporters face have increased and evolved in recent years.

Ernest Sagaga, head of human rights and safety at the International Federation of Journalists, said that there is a “safety crisis in the media” that has been growing over the last decade. Sagaga, who was a journalist for the BBC in the late 1990s and early 2000s, said that fewer Western journalists are covering conflict zones as threats continue to be deterrents, and that social media has changed the playing field for journalists.

“If I talk to you about my time as a journalist where I covered armed conflict situations, journalists were actually welcome,” he said. “We would go to a situation, to an area where the warring parties would really be relying on us to get their message out. So they would actually give us decent treatment, because they wanted us to talk about them, talk about the situation, basically bring to prominence whatever they were fighting for.”

Social media has had an impact on journalists. The biggest issue, particularly for women journalists, journalists of color, and gender non-conforming journalists in the United States and Canada, has been online harassment.

Today, he said armed groups have social media accounts and the ability to put their own messages out unedited.

“They no longer need us,” he said. “Suddenly, we become unwelcome witnesses because we can of course report on whatever they are doing, including any violations of human rights, any war crimes they may commit. And they don’t like it.”

Social media has had an impact on journalists in other ways as well. Lucy Westcott, the James W. Foley Fellow at the Committee to Protect Journalists, who does research with the committee’s Emergencies Response Team, said that the biggest issue, particularly for women journalists, journalists of color, and gender non-conforming journalists in the United States and Canada, has been online harassment.

“Newsrooms often encourage their reporters to be online, to engage with their audience, to engage with the public,” Westcott said. “[Social media] is really necessary. At the same time, it can turn nasty very, very quickly, and you can have your mentions flooded with God-knows-what.”

Ninety percent of journalists in the United States Westcott surveyed this year reported that they saw online harassment as their biggest threat.

Westcott, who previously worked as a journalist for Newsweek and as the United Nations correspondent for the Inter Press Service, said that she had photos of severed heads tweeted at her at one point. Ninety percent of journalists in the United States Westcott surveyed this year reported that they saw online harassment as their biggest threat.

Ravi Prasad, who is the director of advocacy at the International Press Institute and a former Times of India and BBC journalist, said the online attacks and intimidation have “forced journalists to follow self-censorship. It’s online, but it’s a matter of time before the online [attacks] become physical,” he continued.

The media landscape has also shifted, with many newsrooms downsizing, and more and more journalists opting to work as freelancers. Neha Wadekar, a freelance multimedia journalist based in Nairobi, Kenya, described a reporting trip last year to Aden, Yemen, with two other freelancers.

The trio were supported by the Ground Truth Project, and went through extensive security training, painstakingly obtained kidnap and ransom insurance (a difficult process, Wadekar explained, since companies were hesitant to offer insurance to people entering a warzone), and worked with a London-based risk management company which assisted with security, checked in twice daily, and helped the team put together a plan in Aden.

Stella Paul, a freelance journalist based in Hyderabad, India, said that she has seen several female colleagues in India quit reporting in the field and instead opt for desk jobs because of the increasing prevalence of sexual violence against women in India.

“We basically just begged [the company], and we [said], ‘This is a really important story,’” Wadekar said. “‘We don’t have a ton of resources or funding, you know, we’ve got some support but not enough to really pay you like CNN would pay you, for example. But we really want to do this, and we think it’s important.’”

Wadekar said the company agreed “out of the kindness of their hearts.”

Stella Paul, a freelance journalist based in Hyderabad, India, who was awarded the Courage in Journalism Award from the International Women’s Media Foundation in 2016, said that she has seen several female colleagues in India quit reporting in the field and instead opt for desk jobs because of the increasing prevalence of sexual violence against women in the country.

“Safety, especially for female reporters, is a huge, huge issue in India,” she said. “But I don’t really see a very organized effort to tackle that. They’re sporadic, there are scattered groups of journalists, small networks, who do address if something big happens, they do sign a petition and they do release a statement. But we don’t really have a country-wide network where there’s an effort to bring all the women journalists [together] and to make the environment safe. I don’t really see that effort here, and it really makes me sad.”

Most journalists are not taking advantage of the resources available. One demographic is often left out of the mainstream narrative around reporter safety: fixers.

Across the world, organizations like the ones Paul envisions for India abound. However, Prasad, who works with the International Press Institute, said that most journalists are not taking advantage of the resources available.

“That’s the indifference of journalists,” he said. “They don’t really care who’s talking about their safety or not. They’re busy doing their job. When I was a journalist, did I care about what IPI or CPJ or Reporters Without Borders was doing? No. I was busy doing my stories.”

One demographic is often left out of the mainstream narrative around reporter safety: fixers. Fixers are people hired by foreign correspondents and news organizations who serve as translators and guides, and help arrange interviews and meetings that otherwise might be remote possibilities for reporters.

Sangar Khaleel, a fixer based in Erbil in Iraqi Kurdistan who frequently works with NPR, said that the work he does is risky. He wishes journalists would give fixers more credit, and that organizations like the Committee to Protect Journalists would pull their weight for them, too.

In 2018, 79 journalists and media staff died in work-related incidents, and over 250 journalists were jailed. Many say the risks reporters face have increased and evolved in recent years.

“That’s so painful for us, to be honest,” he said. “Because whatever the journalist writes, whatever the photographer takes photos of, whatever the documentaries [are] about, we’re with them. We are all behind every single word. We are there, we are behind the camera, we take them there, we give them the service. And we don’t get recognized.”

Khaleel, 30, said that things have been a little better lately. In October, he won the Kurt Schork Memorial Award in journalism from the Thomson Reuters Foundation.

He said he was traveling to Syria for work the day after a phone interview. He said the journey would take seven hours, and then corrected himself.