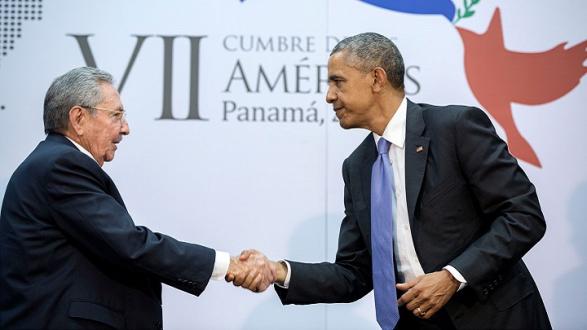 The simultaneous announcements by Presidents Raúl Castro and Barack Obama on December 17, and the measures being carried out by the two governments, reflect the overdue US decision to respect Cuba as a sovereign country and Cuba’s recognition that its interests are served by mutually respectful rapprochement with the United States. Officials from the two countries have negotiated secretly for decades. However, one or both sides always backed away. This is fundamentally because of Washington’s lingering hegemonic presumption and fear on the part of Cuba’s leaders that rapprochement with the United States would risk the country’s hard-won independence.

Rapprochement with Cuba has been on Obama’s agenda from the start, and he can pursue this without Congressional constraint.

International, domestic, political, and personal imperatives all made this breakthrough possible now. Shifts in demography and opinion have greatly reduced the cost to the U.S. administration of changing policy. Latin American insistence that Cuba be invited to this year’s Summit of the Americas required a decision from the United States. Cuba is helping end the FARC insurgency in Colombia, and the United States and Cuba have parallel interests in response to Venezuela’s deterioration. The two countries have been cooperating on humanitarian relief in Haiti, responding to the Ebola crisis, narcotics, immigration, and other issues. Cuba long ago stopped supporting armed insurgencies. The interests of U.S. citizens and firms have been damaged by the embargo. Rapprochement with Cuba has been on Obama’s agenda from the start, and he can pursue this without Congressional constraint.

Reestablishing conventional diplomatic relations will not end conflict between Cuba and the United States, from Guantánamo to the Middle East. It will not create instant trust after decades of pervasive hostility, nor by itself reshape Cuba’s authoritarian polity and statist economy. Castro and his colleagues have introduced some reforms, but shown no inclination to cede power or unleash free markets. The United States retains its ambition for global and regional influence, its devotion to free market prescriptions, and the commitment to civil and human rights.

The slow opening of the Cuban economy has already begun to produce internal calls to expand international exchange, liberalize domestic regulations, and reform the currency regime.

What will likely change, however, is the number and influence of Cuban and international actors that can affect the country’s future. The slow opening of the Cuban economy has already begun to produce internal calls, both from state enterprises and private businesses, to expand international exchange, liberalize domestic regulations, and reform the currency regime. Such forces will multiply as trade, investment, and tourism expand business and civil society organizations become active, and ideas flow more freely. They will change the dynamics of Cuba and of inter-American relations, as long as the mutual and fundamental shifts can be reinforced, internally and internationally.

Abraham F. Lowenthal is President Emeritus of the Pacific Council, non-resident senior fellow of the Brookings Institution, and was founding director of the Wilson Center’s Latin American Program and the Inter-American Dialogue.

Published in El Mercurio in Chile, Folha de Sao Paulo in Brazil, and Reforma in Mexico.