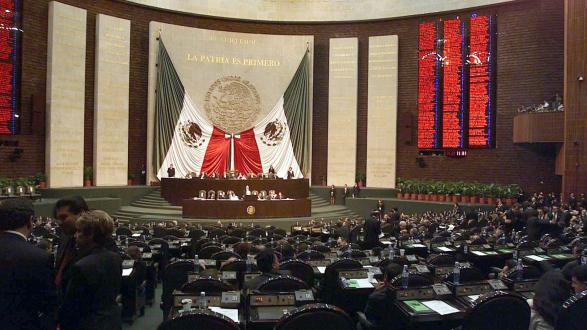 From its independence, Mexico lived disputing its form of government. Edmundo O’Gorman describes with great vehemence the debates, disputes, and disagreements that took place as to whether the country should be republican or monarchical, centralist or federalist, conservative or liberal. In more recent years the discussion has been about whether the political system should be presidential or parliamentary and that discussion has been framed in terms of “regime change.”

In reality, the way in which a government is organized does not constitute the essence of a regime; rather, the latter is a representation of the regime in daily political life. From this perspective, the relevant discussion should not focus on the form of government but on its essence.

The current regime operates through a formal structure of three separate branches inspired by the American system and, in its origin, from the conception of Montesquieu. However, its essence refers to the regime that emerged from the Mexican Revolution and whose nodal characteristic lies in the unipersonal power represented by the president.

The old regime's validity and viability was extraordinary, but for a limited period.

For several decades throughout the 20th century, the revolutionary regime worked according to its design, guaranteeing political stability and creating conditions for the growth of the economy. The centralization of power allowed resolving conflicts and, in the absence of other effective means of settling disputes, contributed to the country’s development.

When the economic and political premises began to fail, especially between 1965 and 1968, the system began its decline, which has not ended. The governments that emerged from that era—from Echeverría to Peña—faced challenges stemming from the increasing diversity of society, the emergence of organized crime, and the extraordinary complexity of the economic world in the era of globalization, for which the stagnant political system was not prepared, nor did it have the means or the flexibility to adapt.

The old regime, structured almost 100 years ago, was conceived to face the chaos that the end of the revolution had left and responded to the time and circumstances in which it was organized. Its validity and viability was extraordinary, but for a limited period.

What was once a hegemonic regime that enjoyed not only broad support but even great prestige, became a discredited and illegitimate system.

For several decades, the regime was allowed to achieve economic growth rates close to 7 percent per year on average, with inflation hovering around 2 percent. It was an exceptional time in which the combination of authoritarian political control with an equilibrium in the balance of payments achieved exceptional and sustained prosperity between the forties and the sixties. The political system that existed favored such achievements but, by not adapting to the changing times, ended up being dysfunctional.

However, the fact that it is dysfunctional, is characterized by enormous deficiencies and has no capacity to deal with daily and structural challenges—from insecurity to waste in the government accounts—has not prevented it from securing its permanence in the face of all odds, including the 2,000 political transition to two governments of another party. The political system—the revolutionary regime—has remained unperturbed.

The difference between the successful years of the old regime and the current moment lies in the legitimacy of the system. What was once a hegemonic regime that enjoyed not only broad support but even great prestige, became a discredited and illegitimate system. Legitimacy was lost because the system ceased to be functional: despite the improved economy, it created vast social differences and has been unable to deal with the wave of violence and insecurity.

What Mexico needs is a new regime based on effective checks and balances, duly ingrained constitutional balances, transparency, and broad rights and protections for the citizenry, all wrapped up in a regime based in the Rule of Law.

The circumstances of the 21st century are radically different from those that gave rise to the movement led by Plutarco Elías Calles in 1929. Today the tessitura has been stated sharply: either Mexico returns fully to the old system as proposed by Andrés Manuel López Obrador or it builds a new political regime, breaking, once and for all, with the old order.

The old regime is based on meta-constitutional powers for the presidency, a system of endless crossed loyalties, full discretion in the exercise of governmental affairs, arbitrariness in decision-making, and corruption as a means of appeasing the clienteles that comprise it, all wrapped up in a world of impunity. That is, a system that confers absolute faculties on the president and that, although distorted over time, allows decisions to be made by one person with no checks. That is the regime that Morena’s candidate promises to return to.

What Mexico needs is a new regime based on effective checks and balances, duly ingrained constitutional balances, transparency, and broad rights and protections for the citizenry, all wrapped up in a regime based in the Rule of Law. That is, a radically different regime that starts from the principle that the government is to serve the citizen and generate conditions for the development of the country.

Two contrasting projects that must be clearly assumed by the candidates, defining their position fully: for or against the citizenry, without considerations or exceptions.

Luis Rubio is a Pacific Council member and president of the Mexican Council on Foreign Relations (COMEXI).

This article was originally published by COMEXI.