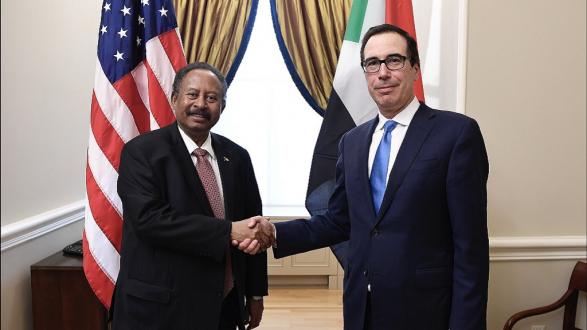 The stark juxtaposition of these highs and lows reminds us of the complicated, often harrowing, path to democracy. Now more than ever, the Trump administration and the international community as a whole must remain engaged and resolute in supporting Sudan’s critical evolution from brutal authoritarianism to true civilian rule.

The Forces for the Declaration of Freedom and Change, those at the vanguard of the people’s revolution that toppled Sudan’s tyrannical regime, labeled the blast a “terrorist attack,” calling on the people of Sudan to take to the streets to “show our unity and cohesion….and protect the transitional authority.”

It remains unclear who perpetrated the attack against Hamdok, a respected former UN economist who was appointed in August 2019 by Sudan’s Sovereign Council. The Council, the result of a power-sharing deal reached after months of negotiations between the military and the pro-democracy movement, is made up of six civilians and five military officers. Its mandate over the next three years is to navigate the labyrinthine transition and shepherd the nation toward civilian-led government.

The benefits of transitional efforts have yet to trickle down to the Sudanese people. Nearly a year after genocidal leader Omar al-Bashir was ousted, the country is in the grips of a dire economic crisis.

Hamdok seems genuinely committed to restoring peace and economic stability, but as Sudan’s first post-Bashir leader, he has been navigating the tumultuous, uncharted path to democracy largely on his own, facing stiff resistance from Sudan’s military, Islamists and other former allies of Bashir who still retain a great deal of power. Many on the ground report that despite promising indicators of change, such as progress in talks with rebel groups and willingness to secure accountability for various atrocities perpetrated within the country, the usual suspects still very much hold the reigns.

This is particularly true of Mohamed Hamdan Dagalo, long referred to as Hemeti, Bashir’s heir apparent, whom Bashir referred to as “my protector.” A ruthless commander who has amassed immense wealth, Hemeti is the absolute gatekeeper of the RSF, the current incarnation of the Janjaweed, or “devils on horseback,” who perpetrated the atrocities in Darfur beginning in 2003.

While insiders believe Bashir’s deposal was only possible because Hemedti was unwilling to unleash the RSF on protestors at the height of the protestors’ revolution, he did that very thing in June of 2019, when RSF cracked down on a civilian sit-in in Khartoum, killing more than 150 people, dumping bodies in the Nile and raping countless women. Hemeti is Vice Chairman of the Sovereign Council, a reality that perhaps encapsulates most clearly the challenges that lie ahead.

The benefits of transitional efforts have yet to trickle down to the Sudanese people. Nearly a year after genocidal leader Omar al-Bashir was ousted, the country is in the grips of a dire economic crisis. Inflation stands at 60 percent, and the unemployment rate in 2019 was 21.1 percent, according to the International Monetary Fund.

Hamdok has been making significant strides towards moving Sudan past its status as an international pariah. He has taken bold steps to liberalize the economy and made historic, game-changing visits to war-torn areas.

The government has reported that 30 percent of Sudan’s young people, who comprise more than half of Sudan’s more than 42 million population, are out of work. Moreover, instability still abounds. The Darfur region, the epicenter of the genocide that began in 2003, remains plagued by unrest and attacks on civilians.

Just two months ago, an armed revolt from within Sudan’s security forces shut down the capital’s airport and left at least two people dead. Rogue intelligence officers loyal to Bashir attempted to mutiny over the issue of severance pay, leading to clashes in Khartoum before the army quelled the violence. The episode served as an ominous sign of what could happen at any time during this delicate transitional period, while the army and intelligence services still wield enormous power—even with Bashir in prison and promising reforms underway.

Hamdok has been making significant strides towards moving Sudan past its status as an international pariah. In addition to ingratiating himself with officials during diplomatic meetings at the United Nations and in Washington, D.C., Hamdok has begun instituting real reforms. He has taken bold steps to liberalize the economy and made historic, game-changing visits to war-torn areas, including Darfur and South Kordofan, promising peace to war-beleaguered Sudanese far away from Khartoum.

According to Foreign Policy, “Some policymakers in Washington and other Western capitals are for the first time in decades cautiously optimistic about Sudan’s future, suggesting that if Hamdok manages to continue his reforms, he could alter Sudan’s image as a global problem child—and perhaps even transform it into a democratic success story.”

The attempt on Hamdok’s life reminds us of the long road ahead, but also reinforces the need for the United States to support this important nation as it rises out of the ashes of its past.

Hamdok’s unwavering commitment to moving his country beyond its tortured past was evidenced by his remarks immediately following the attempt on his life. He tweeted, “Rest assured that what happened today will not stand in the way of our transition, instead it is an additional push to the wheel of change in Sudan.” Hamdok adroitly articulated the level of vigilance that must persist in the face of such threats to democracy. It is imperative that Washington and the international community seize this opportunity to help the Sudanese people realize the democracy they so desperately yearn for and deserve.

Indeed, efforts to do exactly this are underway in Congress. On March 6, House leaders introduced the Sudan Democratic Transition, Accountability, and Financial Transparency Act of 2020 (H.R. 6094). This marks the first comprehensive effort on behalf of the U.S. government to intelligently undergird Sudan’s transitional process in a multi-sectoral, strategic, and meaningful way.

If enacted, the legislation will:

Representative Elliot Engel, Chairman of the House Foreign Affairs Committee, who spearheaded the bill, said, “I am proud to introduce this measure that moves us towards a positive, constructive relationship between the United States and Sudan. This bipartisan bill is a declaration of Congress’s support for the civilian-led transition’s reform agenda, advancing what the people of Sudan accomplished during their revolution.”

The attempt on Hamdok’s life reminds us of the long road ahead, but also reinforces the need for the United States to support this important nation as it rises out of the ashes of its past.