Passage of Uighur Act Vital Step for Accountability of China 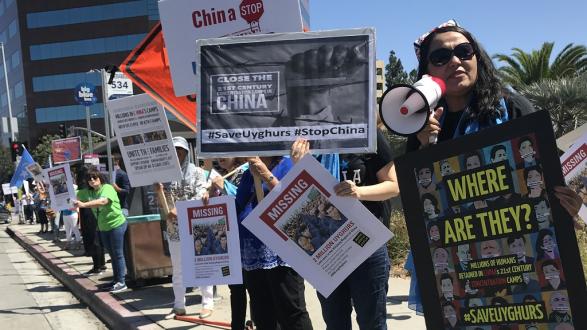 Late on Tuesday evening, December 3, the U.S. House of Representatives passed the Uighur Human Rights Policy Act in a landslide vote of 407 to 1, with 23 not voting. Added to a similar bill that passed the Senate unanimously in September, this amounts to a momentous victory for the persecuted Uighur population of East Turkestan (the name preferred by the Uighurs for the region commonly known as Xinjiang, China).

This version of the bill would force President Trump to condemn abuses against the millions of Uighurs in China, impose sanctions against Chinese leadership responsible for the mass detention camps, and enact export controls on technology that could be used in China’s omnipresent surveillance operation.

It is also a victory for the Uighur diaspora here in the United States, a small group that has worked tirelessly to mobilize their own community and others to ensure this legislation’s passage. Jewish World Watch has partnered consistently with members of the local Uighur community to raise awareness of the desperate plight inside China of their friends and family and to encourage members of Congress to endorse this game-changing legislation.

The real-life stories of missing relatives and heartfelt activism of our Uighur brothers and sisters has educated and touched the hearts of many elected officials, inspiring numerous members of Congress to immediately pledge their support.

The real-life stories of missing relatives and heartfelt activism of our Uighur brothers and sisters has educated and touched the hearts of many elected officials, inspiring numerous members of Congress to immediately pledge their support. We stand in solidarity and celebration with them in the wake of this important vote.

The Senate version of this bill, introduced by Marco Rubio (R-FL) and Bob Menendez (D-NJ), unanimously passed the Senate on September 11, 2019. The House bill passed Tuesday is more far-reaching than the Senate version, as it promises to enact export controls to prevent U.S. technology from being used to bolster the Chinese government’s Orwellian surveillance capabilities.

The House and Senate versions must now be reconciled. It will then be up to President Trump to sign this extraordinarily bipartisan bill and thereby condemn Beijing’s human rights abuses. Senator Menendez called Tuesday’s vote “recognition that the U.S. government cannot afford to stand idly by as millions of Uighur Muslims continue to be unjustly imprisoned, subjected to a mass surveillance state, and forced into labor camps by an autocratic regime.”

Beijing is perpetrating a systematic and widespread cultural genocide against the Uighurs, which likely rises to the level of crimes against humanity.

“Do not stand idly by” is Jewish World Watch’s mandate and rallying cry, a promise by our community to speak out and to take action in the face of any mass atrocity plaguing the world. We applaud both chambers of Congress for embracing this call to action and taking proactive steps to stop the unconscionable abuses and hold the architects of these atrocities accountable.

The Uighur human rights movement reached a tipping point last month when two separate leaks of hundreds of pages of official Chinese government documents corroborated what activists, rights groups, and journalists have been alleging for years—that Beijing is perpetrating a systematic and widespread cultural genocide against the Uighurs, which likely rises to the level of crimes against humanity.

The first set of documents, first published by The New York Times on November 16 and now known as the Xinjiang Papers, revealed the underpinnings of the Chinese government’s crackdown on the Uighurs in over 400 pages. Just days later, on November 24, the International Consortium of Investigative Journalists (ICIJ) published the China Cables—highly classified Chinese government documents revealing the operations manual for running the mass detention camps in East Turkestan and exposing the mechanics of the region’s Orwellian system of mass surveillance.

The Times’ and ICIJ’s exposés offered a terrifying window into the crackdown on ethnic Uighurs and other Turkic Muslims in East Turkestan and quickly prompted new cries for accountability.

According to the Associated Press, the Consortium verified the trove of documents by examining contemporaneous state media reports and public notices, consulting experts, cross-checking signatures, and confirming the contents with former camp employees and detainees.

The Times’ and ICIJ’s exposés offered a terrifying window into the crackdown on ethnic Uighurs and other Turkic Muslims in East Turkestan and quickly prompted new cries for accountability. The classified documents confirm what Jewish World Watch and our partners have feared for too long, that engineered cultural genocide is undeniably underway and that the systematic and widespread nature of Beijing’s rights-effacing policies rises to the level of mass atrocity crimes.

The documents lay bare the Chinese government’s deliberate strategy to lock up ethnic minorities as a preventative measure—even before a crime is committed—to rewire their thoughts through forced ideological and behavioral re-education facilities run in secret. The papers also demonstrate how Beijing is pioneering a terrifying new form of social control drawn on data collected by mass-surveillance technology.

This rare look into Chinese policy revealed that China’s leadership has viewed Uighurs as sub-human, prone to violence, and uncivilized. This “othering” has been a common factor leading to genocides throughout history.

In total, the documents reveal a vast system that uses the “organs of dictatorship” to target, surveil, and grade an entire ethnic group in order to forcibly assimilate and control its members. In the words of Chinese President Xi Jinping, the documents instruct Chinese officials to “show no mercy” in wiping the human slate clean of the Uighur culture and, potentially, the Uighur people altogether.

The leaks reveal explicit details on the inner-workings of the concentration camps Beijing claims are voluntary vocational centers intended to benefit and enrich the lives of the Uighurs:

The documents have jumpstarted what had been a slow-moving legislative process in motion since January, when the Uighur Human Rights Policy Act was first introduced.  The leaked dossier could also just reveal the tip of the iceberg in terms of the extent of China’s abuses. There is no question that they expose foundational acts that have characterized mass atrocities since time immemorial—classification and dehumanization.

This rare look into Chinese policy revealed that China’s leadership has viewed Uighurs as sub-human, prone to violence, and uncivilized. This “othering” has been a common factor leading to genocides throughout history and a likely indicator that much more grave and rights-effacing tactics are in the works. One Uighur teacher who suffered abuse in one of the camps told the Associated Press, “They didn’t see us as humans. They treated us like animals—like pigs, cows, and sheep.”

Indeed, reports of far more egregious violations have been revealed as awareness of the Uighur crisis has grown. At first, our Uighur friends have told us, they stayed quiet, fearing that their relatives might be harmed further if they spoke out.

It is now clear that China is guilty of gross and systematic human rights violations, with culpability beginning at the highest level of government and permeating all other levels.

Since their despair reached the level that they felt compelled to raise the alarms in order to seek justice, many accounts of a multitude of gross human rights violations have been revealed: forced indoctrination, deprivation, torture, and sanctioned rape inside the camps; children forcibly separated from their parents and placed in orphanages where their Uighur identifies are completely wiped away; Uighurs being used for organ harvesting and forced labor; and busloads of Uighurs leaving the camps in the dead of night, never to be seen again—suggesting there may be extrajudicial killings.

While some of these accounts may have once seemed outlandish without corroborating evidence, which is exceedingly difficult to obtain given Chinese control over the region, the two recent leaks suggest that such atrocities may well be taking place as a part of the practice of othering and social engineering that Beijing has adopted towards the Uighurs.

It is now clear that China is guilty of gross and systematic human rights violations, with culpability beginning at the highest level of government and permeating all other levels. The inhumane detention camps of East Turkestan and the depravities occurring inside them constitute crimes against humanity, and we commend the U.S. House and Senate for treating the Xinjiang Papers and China Cables as grounds for urgent action.

We at Jewish World Watch will continue to insist that both Congress and the president urgently pass and enact this legislation in a timely fashion so that it can live up to its promises and help bring an end to these atrocities.

We ask both houses of Congress to quickly reconcile the two versions of the Uighur Human Rights Acts so that momentum is not lost.

We urge President Trump to continue his efforts to hold Beijing accountable for abuses against its people, following up on his recent signing of the Hong Kong Human Rights and Democracy Act. The United States must send a clear message to Beijing that such atrocities cannot be allowed to continue with impunity. The international community must show the Chinese regime consequences for their fundamental and large-scale abuses of human rights.

We will continue to insist, as well, that both Congress and the president urgently pass and enact this legislation in a timely fashion so that it can live up to its promises and help bring an end to these atrocities.