A New Year of Peace for Ethiopia and Eritrea 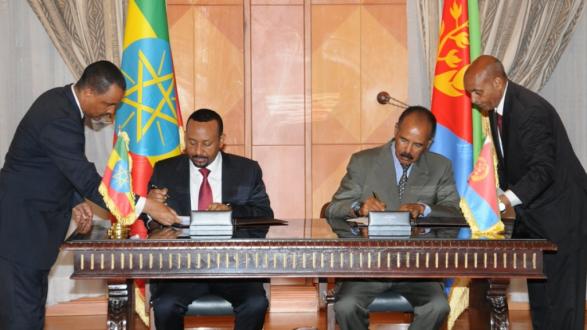 On the streets of Little Ethiopia on Fairfax Avenue, hundreds of Ethiopians and Eritreans come together to celebrate Enkutatash, the Ethiopian New Year on September 11. The street is packed with people dressed in traditional tribal clothing. Street vendors are busy taking customer orders as the smell of lentil samosas frying lingers in the air. Children laugh as they dart through the crowd and play tag. The stereo from the main stage is booming with Amharic music as Habeshas (Ethiopians and Eritreans) jump up and down shaking their shoulders in the traditional dance of eskista. The Ethiopian and Eritrean flags wave in the air as the community comes together to bring in Enkutatash (New Year) as one united front.

This new year is particularly significant because Ethiopia and Eritrea recently opened their borders to each other after a border conflict that lasted 20 years and resulted in tens of thousands of deaths on both sides. In April of this year, Abiy Ahmed became prime minister after the resignation of former Prime Minister Hailemariam Desalegn.

Since Ahmed’s inauguration, he has actively tried to create a peaceful dialogue with Eritreans and he is the first Ethiopian official to visit Eritrea ever since the nation gained its independence in 1993. In return, the president of Eritrea, Isaias Afwerki, visited Ethiopia for the first time and signed peace agreements that also established measures to foster economic cooperation.

As a result of these recent developments in East Africa, Habeshas across the diaspora are rallying together as peace and prosperity are finally on the horizon after decades of conflict.

As a result of these recent developments in East Africa, Habeshas across the diaspora are rallying together as peace and prosperity are finally on the horizon after decades of conflict. Eritrean-American and USC graduate student of Specialized Journalism (The Arts) Neyat Yohannes is elated by this historical moment. “The progress abroad has opened up an active dialogue within my community. The rug under which we’ve swept all of this subject matter is being aired out and productive conversations are taking place.”

Yohannes does recognize, however, that such rapid change can be alarming. “While the progress makes me feel hopeful, I am certainly equal parts nervous. Swift development after such a long stretch of dormancy feels a bit jarring,” she said. “Still, whatever the outcome—and I hope for a positive one—these developments in Ethiopia’s and Eritrea’s relationship could spark similar moves in other parts of Africa. Or at the very least, the international coverage could remind other folks that Africa is indeed a continent full of complex countries with even more complex relationships.”

Former African Student Union co-chair at UC Santa Cruz Naomi Tesfuzigta feels the positive energy that peace back home is bringing to Habeshas living in the United States. “I haven’t seen members of our communities filled with this much optimism and hope. I also haven’t seen a public figure from an African nation universally adored across ethnic groups and religions before. It makes me happy to see that this peace was established in our parents’ lifetimes, especially considering that political instability and war has been something that has defined their lives.”

Witnessing this young politician approach the countries’ underlying tension with honest dialogue and openness is not something usually expected of African politicians.

Tesfuzigta said she believes that this newfound peace will also bring economic prosperity. “I’m interested to see how this will affect trade in the region and the economy; Ethiopia having access to a port now might benefit both. I’d like to see both countries become self-sufficient and utilize what they both have for the good of their own people and not the Western world. I think the region is changing for the better and I am overall hopeful of where this all will go.”

As an Ethiopian-American, I too could not be any prouder of the progress the Horn of Africa is making. Attending Prime Minister Ahmed’s press conference this past July at USC’s Galen Center was a defining moment for me. Witnessing this young politician approach the countries’ underlying tension with honest dialogue and openness is not something usually expected of African politicians.

Ahmed’s words resonated with the packed stadium as roars bellowed, and his goal for a democracy across both nations is now a possibility for the Habesha people. So this New Year is not just another year for us. It’s a chance for Ethiopia and Eritrea to get a government they deserve, a government that is reflective of its people and their desire to be democratically sound.

Lulit Tadesse is a USC graduate student participating in a foreign affairs reporting class taught by Professor Phil Seib, a collaboration between the Pacific Council and the Annenberg School of Communication and Journalism.