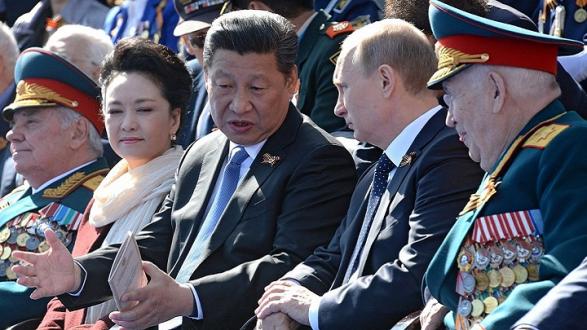 Large geopolitical shifts, like major earthquakes, are rare but hold the potential to alter the global landscape. We are in the midst of such an earthquake now, with consequences not only for political space but for political time: when the tectonic dust settles, Russia will be about a thousand miles closer to China… and Ukraine about 10 years closer to Europe.

First consider Moscow’s eastward movement. The Obama administration’s targeted sanctions, combined with the credible threat of broader economic penalties to be imposed by the European Union, succeeded in persuading Russian President Vladimir Putin to back off his efforts to undermine Ukraine’s May 25 presidential election. But those same sanctions also led Moscow to conclude a 40-year gas deal with Beijing at rates Gazprom can barely afford. With the West closing its doors, Putin was prepared to accept whatever terms the Chinese offered.

Likewise the rapidly increasing distance between Moscow and Kiev helped drive Putin into China’s open arms. Ukraine was the most important component of the former Soviet Union to escape the Kremlin’s rule following the 1991 collapse of the USSR, and figuring out how to handle relations with this newly-independent “brother state” has been a central dilemma of Russian foreign policy ever since. Indeed, having recently returned from Moscow with a delegation from the Pacific Council, I was reminded by our interlocutors there that Russians feel deep, historical connections to Ukraine that we as Americans do not always fully appreciate.

With the West closing its doors, Putin was prepared to accept whatever terms the Chinese offered.

Ukraine appeared to be firmly back within Moscow’s orbit following the 2010 election of Putin’s protégé, Victor Yanukovich. But when the country’s slow-motion revolution of the past six months finally toppled the Russian-backed dictator, Russian plans necessarily changed. Moscow first lopped off Crimea as compensation for this loss, then fomented rebellion in Ukraine’s eastern provinces as revenge. Finally, with an array of sanctions taking shape from western powers, the plates shifted: Putin turned his attention to the energy agreement with China and the thousand-plus miles of pipeline proposed between the two countries.

Meanwhile, the same tectonics are pushing Kiev westward. The focus of Western media on fighting in eastern Ukraine misses the bigger picture: in less than half of a year Ukraine has toppled a dictator, mounted a successful election for his successor, and successfully warded off Moscow’s post-Soviet embrace. In the process Kiev has become the new darling of the European Union, and may soon be headed for fast-track EU membership..

This is a stunning turn of events  As recently as March, informed observers doubted that Ukraine could become a fit candidate for EU membership in less than 20 years. Now those same experts are singing an entirely different tune. Whereas private estimates used to be measured in decades, EU officials I recently spoke with now suggest a much more rapid entry is possible—if the Ukrainians continue to get their house in order.

Kiev has become the new darling of the European Union, and may soon be headed for fast-track EU membership.

How did this happen? There have always been two big knocks against Ukrainian membership in the European Union. The first was the perceived lack of a vibrant civil society—one capable of holding its government to account. The second was the very high levels of corruption in the government and judiciary. The first of these issues has disappeared while the second seems well on its way towards resolution.

After all, whatever concerns there used to be about the vibrancy of Ukrainian civil society were laid to rest by the sustained – and for the most part, peaceful – mass protests leading to Yanukovich’s ouster. And by conducting the country’s cleanest elections since independence, the stage is now set for renewed parliamentary elections perhaps as early as the fall. The big remaining question, at least as far as institutional reform is concerned, is whether the new government is prepared to tackle the country’s notoriously corrupt judiciary. If that proves to be the case, then the sky’s the limit.

Kiev is moving west; but Moscow is just as rapidly moving east. If that trend continues, today’s geopolitical temblor may prove just a foreshock of the mega-earthquake yet to come.

Ukraine is a story of a proud people simultaneously throwing off the shackles of internal despotism and external domination. As a result, Europe is set to become a lot bigger—about 45 million people bigger, to be precise—a lot faster than anyone imagined just a few months ago. And the new east-west divide is likely to be somewhere east of the Dnieper River.

Kiev is moving west; but Moscow is just as rapidly moving east. If that trend continues, today’s geopolitical temblor may prove just a foreshock of the mega-earthquake yet to come.